Free square running backs refer to RBs that come in severely underpriced relative to their projected roles. These players are often priced at the stone-minimum, opening up the DFS slate to jam in the premium plays. DraftKings has raised the salary floor for running backs this season from $3000 to $4000, so spotting these freebies is paramount if we want to afford the high-floor, high-upside smash plays. Using PlayerProfiler’s advanced stats, metrics, and analytics, we can identify RBs that fit the criteria. Here are the free square RBs for the NFL Week 16 DFS main slate.

Rookie sensation Clyde Edwards-Helaire left last week early with hip and ankle injuries. Now that he is done for the rest of the regular season, his 13.9 (No. 17 among qualified running backs) carries and 4.2 (No. 14) targets per game are up for grabs. Le’Veon Bell stands to benefit the most after racking up 16 of his own touches against the Saints, which was 13 more than the next Kansas City RB. As the clear option over Darrel Williams, Bell should see touches similar to Edwards-Helaire from Weeks 1-6. Over that span and before Bell arrived, CEH averaged 17.8 carries, 5.1 targets, and 113.7 scrimmage yards per game. 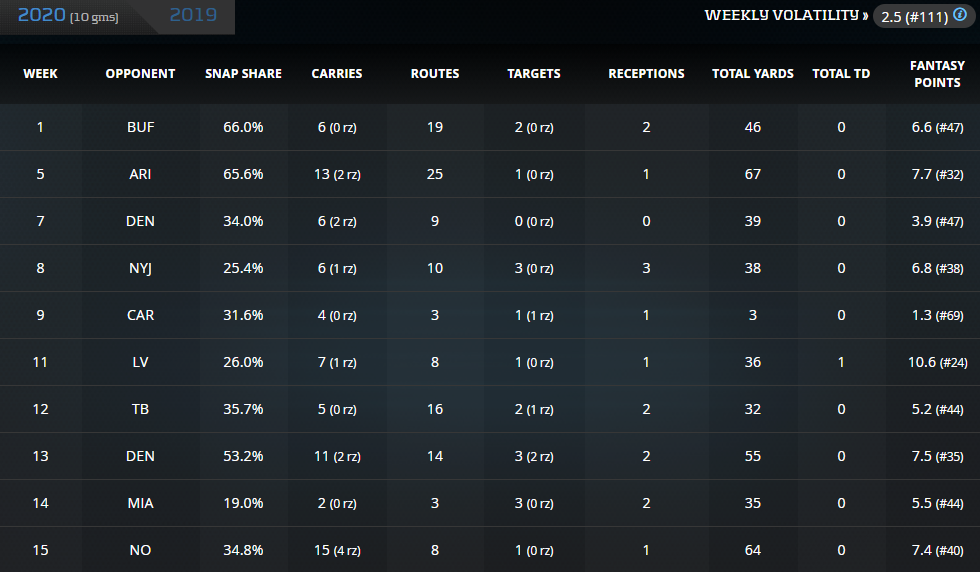 Bell’s workload is obviously underpriced at $5800, but this matchup and game environment makes this one of the best spots of the year. The Atlanta Falcons have allowed the fifth-most receptions to RBs on the season, giving a bonafide receiving back like Bell a high-floor. The Chiefs are also 10.5-point favorites and have an implied team total of 32 points, which is the highest on the slate. Atlanta just gave up multiple touchdowns to Leonard Fournette in Week 14, so we know a spike week can happen here.

Given the spread of this game, Bell and the Chiefs should see nothing but positive Game Script. All these factors give him an excellent floor based on volume alone, and his ceiling is similar to Fournette’s last week. His price isn’t cheap, but at $5800, he projects as one of the week’s best values. Plus, there aren’t many exciting RB options without Alvin Kamara, Dalvin Cook, or Derrick Henry on the main slate.

Melvin Gordon didn’t get the results he was looking for in his last revenge game against the Chargers, but we’re hoping for a different result this week. Gordon is coming off of his second-best game of the season after scoring 24.1 DK points against the Bills. He averaged an efficient 5.4 yards per touch and found the end zone, bringing his total to nine (No. 10) touchdowns on the season.

Gordon has now averaged over 5.0 yards per touch in three straight games while averaging 18.1 DK fantasy points. He should get a solid usage bump on top of his efficiency this week with both Phillip Lindsay and Royce Freeman not practicing with hip issues. If they don’t suit up or are limited in any capacity, Gordon’s 59.9-percent (No. 20) percent Opportunity Share would certainly rise to elite levels.

The Chargers have been a brutal run defense lately, now ranking No. 26 in Defensive Rushing DVOA. Over the last few weeks, they’ve allowed solid outings to Josh Jacobs (twice), Austin Ekeler, Devin Singletary, Salvon Ahmed, and even Frank Gore. Gordon wasn’t able to get much going in their previous matchup, but Lindsay did post a solid day. Without him in the lineup this week, Gordon’s workload and newfound efficiency stand out on this weak RB slate.

After spending Week 14 in the doghouse due to a fumble, Giovani Bernard operated as Cincinnati’s clear lead RB last week. The veteran back handled a season-high 26 touches against a fierce Steelers defense, totaling 22.7 fantasy points due to two touchdowns. Neither Samaje Perine nor Trayveon Williams saw more than four touches in the game, meaning Bernard’s dominance is likely to continue.

Next up is a Houston defense that ranks No. 29 in Defensive Rushing DVOA and has allowed the most rushing yards and seventh-most receiving yards to opposing backs. They are getting absolutely smashed up front in all phases of the game, meaning if the Bengals don’t experience the same positive Game Script they saw last week, Bernard can still get there as a receiver.

Falcon’s HC Raheem Morris has said that Ito Smith is now the lead runner in Atlanta. The 25-year-old RB will get his first crack at a starting gig this week against the Kansas City Chiefs. While starting RBs that are 10.5-point underdogs aren’t ideal fantasy plays, Smith has the profile to cash in on this matchup. He excels in the passing game with a 13.4 percent (89th-percentile) College Target Share. He also ran a 4.50 (77th-percentile) 40-yard dash and posted a 121.6 (67th-percentile) Burst Score, giving him big-play ability that other Falcons RBs have lacked.

Smith’s skills will let him be on the field in obvious passing situations, which should be for the majority of the game with the Falcons such a heavy underdog. Kansas City also funnels production to their RBs. They rank No. 30 in Defensive Rushing DVOA and have allowed the most receiving yards to opposing backs this season. We’ll see 40-plus pass plays from Matt Ryan this week, and checkdowns to Smith will be plentiful. If he can capture some early-down work, he’ll be efficient in all phases of the game.