Stay or Go: Who to hold and who to drop for Week 11 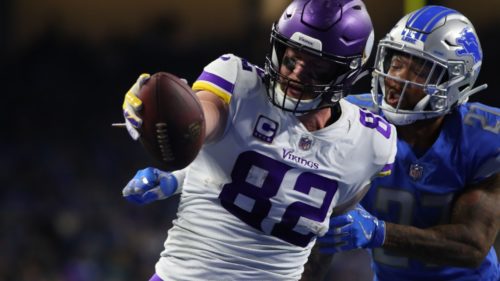 Hopefully, we all survived the bye-pocalypse of Week 10 and are still in the running for a playoff spot. We are down to the home stretch in many leagues, and now is the time teams often take a hard look at their roster and see which players can help them come playoff time. Injuries and unfulfilled expectations continue to be a problem in many leagues, as high profile draft picks just aren’t producing. Let us take a look at some alternatives that we might have buried on our benches, who may be given a shot. There are also some players whose time has come this season, and should no longer be given a place on our rosters. This is the Week 11 edition of Stay or Go.

Kyle Rudolph had been a shell of his once-great fantasy self to begin the year, but he has recently come alive. Rudolph is still as reliable as ever, posting a 96.0-percent (No. 4 among qualified tight ends) True Catch Rate. He’s now scored four times over his past four games, as Kirk Cousins seems to have trust in him again. His +21. 3 (No. 3) Production Premium bodes well for his prospects going forward.

Rudolph owns a robust 87.1-percent (No. 7) Snap Share and has at least five targets in three of his last four games. All signs point to him maintaining this run heading into the fantasy playoffs. Irv Smith will always be there to take away targets. Regardless, Rudolph has the trust of his quarterback in the red zone, and touchdowns are key in fantasy. He’s a firm hold in all formats.

Miami, to put it lightly, has been a mess for most of this season. There was real talk about the possibility of the team going 0-16. That chaos has made its way into the running back room. Kalen Ballage began the year with a shot at the starting job and was quickly buried on the depth chart by Mark Walton and Kenyan Drake. Drake is gone, off to Arizona, while Walton has been suspended for four games. These next couple of games are a showcase for the kind of ability Ballage possesses, including a 115.2 (97th-percentile) Speed Score.

Ballage accounted for 20 of the team’s 26 total carries in last week’s game against the Colts. Indeed, he didn’t do as much as was expected with the lions share of the carries, but there is hope that opportunity will win the day and he will be able to give us RB3 numbers. Likely to carry the load until Walton returns, make sure to keep an eye on Ballage, as he should put up solid numbers in the next few weeks.

Seattle has been the land where fantasy viable tight ends have seemingly come out of nowhere. Will Dissly arrived on the scene, then he got hurt. Now we have Jacob Hollister. He has emerged as a key component in the Seattle passing attack. He already owns an 18.0-percent (No. 10) Target Share, and that number may go up with news of Tyler Lockett being injured.

Hollister tied D.K. Metcalf with a team-high 10 targets last week, and his night was highlighted by a crazy grab in the end zone to put the Seahawks up by four. His 2.42 (No. 1) Target Separation mark has helped both himself and his quarterback Russell Wilson. This adds up to some great potential in a weak fantasy tight end class this year. Fantasy gamers should think about stashing him during Seattle’s upcoming bye. He may end up being a key cog in a run to a league championship.

Baker Mayfield, like the rest of the Browns heading into the season, was hyped up as a fantasy stud. He had a solid rookie campaign in 2018, and the team had added Odell Beckham to a receiving corps that was already solid. All the pieces were in place, and then it all fell apart for Mayfield and the Browns. He has thrown 15 Interceptable Passes this year, good for ninth among the position. He completed 68-percent of his passes this past week, though his average of 6.3 yards per attempt reveals a lack of big plays through the air.

The Browns have leaned more on running back Nick Chubb and the returning Kareem Hunt. A real problem for Mayfield is what happens when the team hits the red zone, specifically his 40.0-percent (No. 45) Red Zone Completion Percentage. He is worse than over 10 NFL backup quarterbacks in that metric. While he might have the occasional game or two with a decent amount of fantasy points, he cannot be trusted and is better left alone as a desperation option.

Jason Witten has been Old Reliable for Dallas for what seems like two decades now. Ever the reliable target, he was always seemed good for a handful of catches for around 60 yards and a touchdown. Those days are over. Witten only had two catches for 17 yards last week against the Vikings. While Dak Prescott had a huge game, throwing for nearly 400 yards, most of that went to new slot dynamo Randall Cobb.

Witten hasn’t scored a touchdown since Week 2 and hasn’t reached over 60 receiving yards at all this year. He owns a 2.2 (No. 27) Drop Rate and 9.4 (No. 31) Yards Per Reception, and that second number is not improving. The emergence of Cobb and Blake Jarwin in the Dallas offense has cut into Witten’s workload in the intermediate area of the field. He should be benched immediately.

Amazingly, Frank Gore has quietly built up one of the best running back careers in the league’s history. The 36-year-old is 73 yards away from third place on the all-time rushing list. He has been serviceable for Buffalo, but the emergence of rookie Devin Singletary has taken its toll. Gore is only seeing a 45.8-percent (No. 38) Snap Share, and has produced little with what he has been given.

Gore was a fantasy asset earlier this season while Singletary was sidelined with a hamstring injury, but that time is gone. He now averages a paltry 3.8 (No. 37) True Yards Per Carry, and his value in the passing game is completely nonexistent. Josh Allen has been handling goal line carries, so Gore won’t be seeing any consistent looks there either. At this point, it’s best to let him go and see if we can find someone with a bit more upside at the position.