Maximizing your fantasy points per salary dollar is the key to cashing in DFS. If you want to afford the best cash plays on the slate, dumpster diving for underpriced value plays is the way to go. With two RBs priced around $9000 on DraftKings, finding value on that site will be key to cashing. FanDuel has Taysom Hill with a TE position tag and has softer pricing, so value there should be easier to find. Here are the best DFS Flex values for Week 11 based on PlayerProfiler’s advanced stats, metrics, and analytics.

Out of absolutely nowhere, the Chargers have a new workhorse RB. After DFS gamers were debating Justin Jackson vs. Joshua Kelley, LA signed Kalen Ballage off the streets and threw him in a featured role just to spite us. The craziest part of it all is that it’s actually working out for them. In two games with the team, he has totaled 33 carries, seven receptions, 186 yards, and one score.

While the box scores look good, Ballage’s production is underwhelming. He’s enjoyed an 89.5 (No. 6 among qualified running backs) Run Blocking Efficiency rating. Despite that incredible blocking, Ballage hasn’t logged a single Breakaway Run this season. That is due to his lack of wiggle, with his 15.4-percent (No. 47) Juke Rate not allowing him to break many tackles at the second level and show off his 115.2 (96th-percentile) Speed Score. This has been a problem throughout his career, but LA’s offensive line is doing an excellent job hiding his deficiencies.

The Chargers are clearly committed to getting Ballage the ball given his 40 touches in two games. Chargers HC Anthony Lynn also acknowledged that he’s their clear starting RB and they want to get him more looks. With nine targets and 11 red zone attempts in two games, he is already seeing the high-leverage work we want in a fantasy RB. If the team tries to feed him more, we’re looking at a potential fantasy superstar.

The Chargers are 9.5-point favorites against the Jets this week. Ballage has extra incentive to perform against his former HC Adam Gase, who released him earlier this season. While the talent is in question, Ballage’s role and game environment make him an incredible value this week.

Since putting up zero fantasy points in Week 4, Brandin Cooks has been on a tear. He’s seen 47 targets over the last five games, posting 411 yards and three touchdowns. He’s now seen a 23.4-percent (No. 16) Target Share on the season, which is actually ahead of Will Fuller’s 20.6-percent (No. 34) mark. Cooks is $1000 cheaper than Fuller on both sites, meaning you get a significant discount for the real WR1.

THERE GOES THAT MAN!

Brandin Cooks takes it to the house!

Cooks also has a chance to absolutely shred his former team. The Patriots have seen a significant fall from grace after possessing one of the most feared defenses of all time last season. They now rank dead-last in Defensive DVOA and are No. 30 against the pass. The Patriots may be getting back Stephon Gilmore, but he still wasn’t able to guarantee himself that he would be on the field. Gilmore has missed three straight games due to a knee injury and may continue to be hampered by it even if he suits up. He would also more likely be attached to Fuller than Cooks.

With two bad defenses and capable offenses, this projects to be one of the best game environments on the slate. Deshaun Watson is also severely underpriced at $6500 (DK) and $7700 (FD), meaning Houston stacks may be popular this week.

On the other side, we have a true alpha WR that is priced ridiculously low. Jakobi Meyers has emerged as the first, second, and third target for Cam Newton. The former undrafted free agent from NC State has been a stud since finally sliding into the offense, with 37 targets over his last four games. Meyers has seen 437 Air Yards in those four weeks, which gives him a league-leading 43.3-percent Air Yards Share on the season. 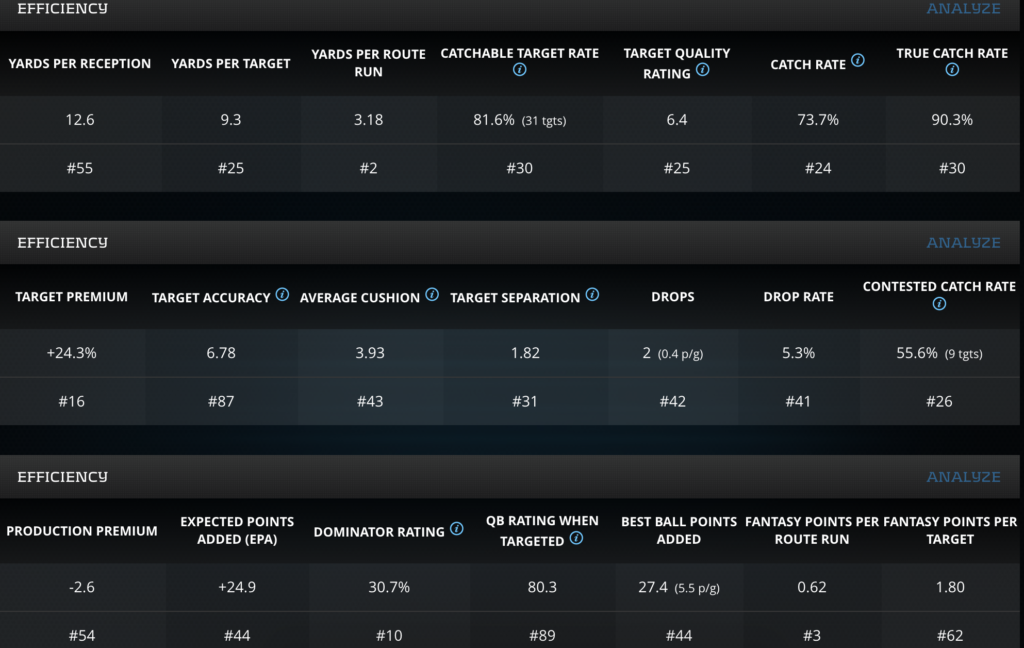 Meyers’ efficiency has also been impressive. On his massive volume, he’s delivered 28 (No. 60) receptions for 353 (No. 60) receiving yards and has a +24.3-percent (No. 16) Target Premium. He also boasts 3.17 (No. 2) Yards per Route Run and 0.62 (No. 3) Fantasy Points per Route Run. We have a WR seeing elite volume while also dominating efficiency metrics despite having a diminished Newton throwing him the ball. What’s the downside this week?

The answer is literally nothing. Meyers faces a Houston defense that ranks No. 28 in Defensive DVOA in a game with a 49-point total, the third-highest on the slate. Houston also ranks dead-last in Defensive Rushing DVOA, meaning you can stack the run-savvy Newton with just Meyers as a nice pivot off of Watson stacks.

If you’re playing on FanDuel, you can essentially disregard T.J. Hockenson. Taysom Hill has been deemed the starting QB in New Orleans and he retains TE eligibility, meaning he has a ludicrous combination of floor and ceiling at one of the worst positions in DFS. If you’re on DraftKings, however, Hockenson makes a lot of sense.

After posting his first bust performance of the season (3.3 points) in Week 10, Hockenson finally saw a price decrease out of the $5000 range. It couldn’t have come at a better time with both Kenny Golladay and Danny Amendola out this week against the Panthers. D’Andre Swift has also been ruled out with a concussion, meaning this offense should skew pass-heavy without their emerging star RB. The 30-year-old Marvin Jones and rotational deep threat Marvin Hall won’t anchor this offense, so Hockenson is the one to pick up the slack.

The Panthers have allowed the fourth-most receptions and yards to TEs this season, so the matchup is there. The only risk is this Lions offense completely bottoms out with all these injuries. Matthew Stafford also picked up a thumb issue last week, but he didn’t miss a snap and looks fine for Sunday. Based strictly on volume, Hockenson should be a solid play in a really bad TE week.

As previously mentioned, Taysom Hill should be a lock on FanDuel. We don’t have Travis Kelce, George Kittle, or even Darren Waller on the main slate, meaning nobody has a chance at matching his upside. He’s also the minimum price at just $4500. There’s nothing else to think about.

Saints’ QB Taysom Hill will start Sunday vs. the Falcons, per source. Hill took all the starter reps at practice this week. Jameis Winston will be the backup.

While QB isn’t technically a Flex position on DraftKings, Hill deserves recognition here. As a part-time player this season, he has 34 carries for 186 yards and a touchdown. If you don’t care about sample sizes, he’s also completing 80-percent of his passes with 17.2 yards per attempt on the season.

That was just a joke, but at $4800, he only needs 50 rushing yards, 150 passing yards, and two total touchdowns to surpass 20 DK points and smash value. The Falcons rank No. 28 in Defensive Passing DVOA, so Hill is in a great spot to post efficient numbers through the air.