Fantasy football gamers have spent the last 11 weeks stockpiling their rosters for the stretch run through trades, waiver pickups and (most importantly) stashing players at the end of the bench based on their advanced stats, metrics and analytics profiles. The hope is that, at this point, all of our proverbial bases are covered. You don’t want to lose an all-important Week 12 game because you have no Plan B if you lost Marvin Jones or Tre’Quan Smith on Thursday night. And even if you’re heavily invested in the Rams and Chiefs offenses, it’s bad form to blame a loss on a bye week when it’s the last one. Having a Tyler Boyd, D.J. Moore or Keith Kirkwood to plug into your lineup in a spot like this could end up being the difference between making or missing the playoffs.

Despite November drawing near a close, it’s still possible to find potential league winners that clear waivers. Anyone who had the foresight to pick up Gus Edwards before his blowup last week (if you exist) knows what I’m talking about. Those owners now have a potential lead back in a run-heavy offense with a glorious end of season schedule. Anyone who managed to pair him with pre-Week 9 recommendation Lamar Jackson has to be feeling good about their chances no matter what the rest of their roster looks like (although said owners will likely be fine even if they only have one). The chances of once again finding that kind of lightning in a bottle at this point are slim, but not improbable.

We’re targeting Malcolm Brown for the same reason we targeted Spencer Ware a few weeks ago. He’s the direct backup to a Top-10 (or, in this case, top one) fantasy RB. One who would see a massive opportunity upgrade with an injury to the player in front of him. It’s a lot easier to spot those players in November than it is in August (hear that, handcuffers?) And while Todd Gurley is expected to be fine following his Week 11 ankle injury, it couldn’t hurt to roster the backup to a player with a noted history of lower body injuries with the fantasy playoffs around the corner.

Malcolm Brown is not the kind of player we would target in any normal situation. Most of the aspects of his prospect profile are decidedly average or below-average. The exceptions being his 72nd-percentile BMI, 63rd-percentile athleticism and 88th-percentile agility. None of that matters nearly as much as the fact that he plays for one of the best offenses in the league. Or the fact that an injury to Todd Gurley would move Brown into a role that has seen 19.4 Weighted Opportunities per game. The time to pounce on a player like this is while or before they’re on bye, not afterwards (as anyone who has been stashing Lamar Jackson knows).

The curious case of Leonte Carroo, the NFL edition, is in the midst of its third year. A player with a 63.9-percent (99th-percentile) College Dominator Rating and 20.7 (95th-percentile) College YPR at a Division I school should be, for all intents and purposes, bust-proof. Despite Jarvis Landry‘s departure, Carroo was released at final cuts before being signed off the practice squad in late October. Now, only with Albert Wilson and Jakeem Grant on injured reserve, is the former third-round pick from Rutgers receiving the chance to prove that he was worth the team’s investment.

Since upsetting the Bears in Week 6, the Miami offense has been slowly falling apart. Given how poor Brock Osweiler has performed, the impending return of a decidedly less than 100-percent Ryan Tannehill will somehow be a cause for hope. In a game that DeVante Parker will try to through a shoulder injury, Leonte Carroo projects to draw the 102nd-ranked coverage of the Colts’ Arthur Maulet. When it comes to stashing or even starting him in deeper leagues, you’re depending on the match-up, the point totals and the player’s intrinsic ability for a payoff. Though risky, there are worse bets to make.

Of the players to be discussed this week, Jake Kumerow is the only one who doesn’t appear in either Player Profiler’s weekly or seasonal rankings at his position. I’ll let you decide whether that means you should be paying more or less attention to him (hint: probably more). He’s the third Green Bay Packers WR to be featured this year, continuing our trend of targeting players on good teams. Though it’s hard to trust a UDFA journeyman to provide consistent fantasy production, it’s worth noting that Kumerow signed a reserve/futures contract with the Packers back in January (a week after being signed to the practice squad) and was given the team’s second I.R. return designation. The team clearly wants him to have a role, and we need to have him rostered before that comes to fruition.

Jake Kumerow doesn’t jump off the (web)page as an athlete. With a 40.7-percent (82nd-percentile) College Dominator Rating and 17.1 (80th-percentile) College YPR, he does stand out as it relates to college production and efficiency. Working against him is the fact that he went to UW-Whitewater (a real school, we promise) as opposed to USF or Notre Dame. In other words, the Jeff Janis corollary. Working in his favor is the fact that he not only received effusive praise from Aaron Rodgers, but he also backed it up with great preseason performances before being placed on injured reserve prior to Week 1. The Packers need healthy bodies at receiver and there’s a chance that Kumerow is activated for a prime-time tilt with the Vikings on Sunday night. You know what to do.

In the same way that it’s hard to identify a starting RB’s true handcuff in August, it’s equally as difficult to decipher a wide receiver depth chart in flux before the season starts. It feels like we’ve been spending the last few months trying to figure out who would eventually settle into the role of Andrew Luck‘s number two receiver. Rookies Deon Cain and Daurice Fountain were injured before receiving the opportunity. Underworld favorite and former T.N. stash candidate Chester Rogers looked like he could be the guy at points this season, as did Ryan Grant. But an old, familiar face has emerged as the answer to the question of who is the WR2 in Indianapolis behind T.Y. Hilton. 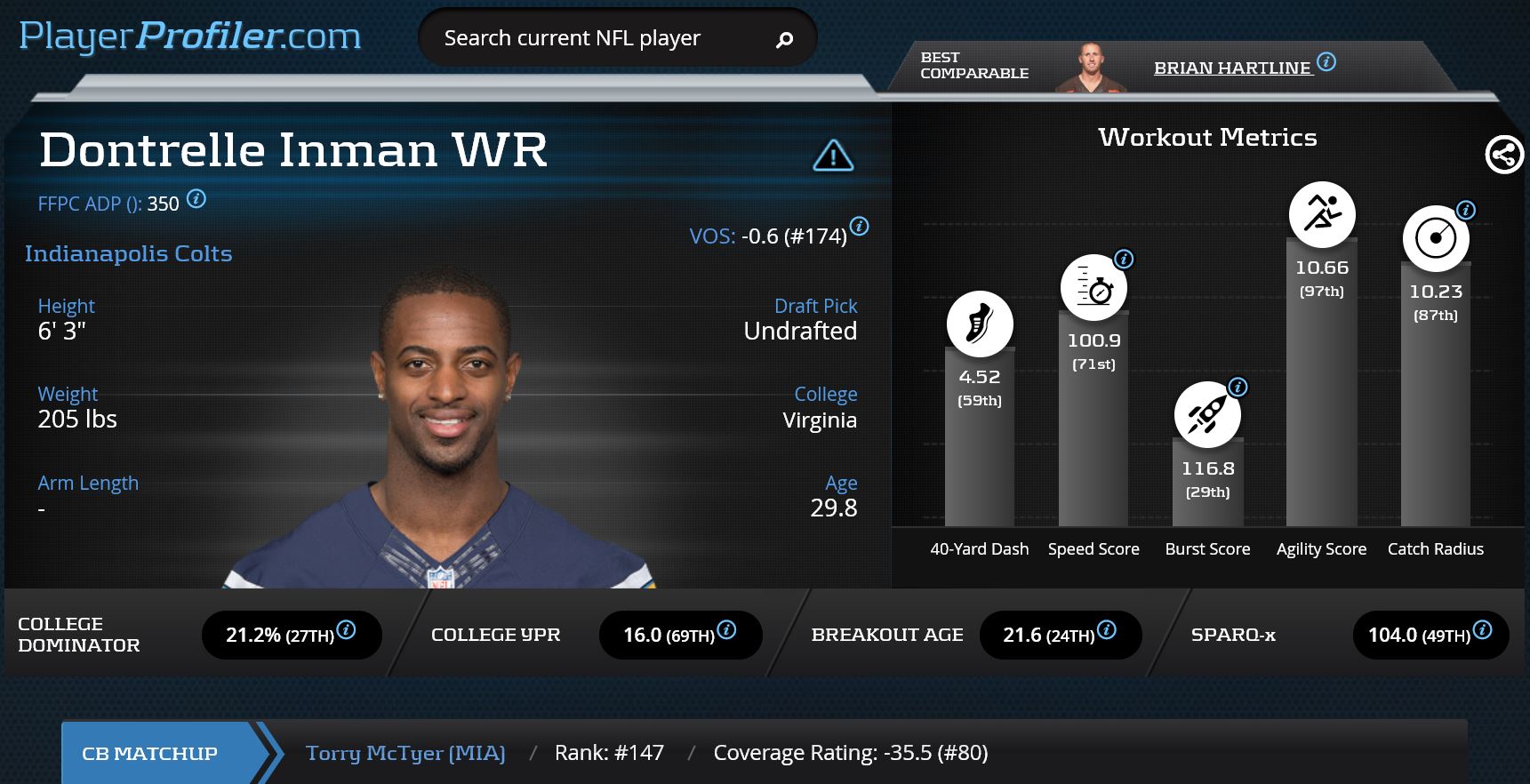 When in doubt about a situation like this, go with the guy who been a proven producer at the NFL level. Though a generally unexciting player, Dontrelle Inman continues to find himself sneaking into the realm of fantasy relevancy. Whether it will help him overcome a brutal end-of-season schedule remains to be seen. But he has been blessed with 97th-percentile agility, an 87th-percentile Catch Radius and a QB who has a chance to fuel his numbers based on projected passing game volume alone. Deep-leaguers ca n feel confident starting him in a week where he projects to draw the coverage of something called Torry McTyer.