Breaking Down the 2020 Cornerback Rankings 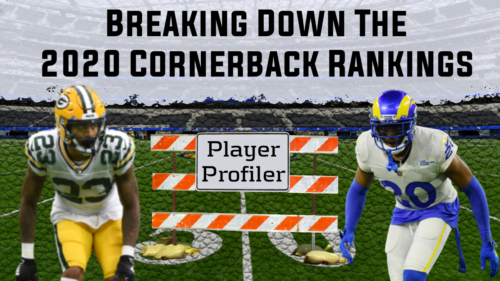 Outside of the question surrounding whether or not running backs matter in the modern NFL, one of the great imponderables surrounding the modern game is which aspect of a team’s defense is more important. Is it the pass rush, or is it the secondary? Is it more important for a team to harass the passer, making the coverage an easier assignment? Or would teams prefer to blanket opposing pass-catchers, creating easier opportunities for defensive ends and outside linebackers to hunt quarterbacks?

Despite that tease, I am not here to answer, nor even lend my opinion one way or the other, to this quandary. Instead, I am here to celebrate the best when it comes to shutting down receivers from the last season of NFL action. Throughout the year, we post our cornerback rankings, allowing the fantasy manager a chance to see what upcoming matchups should be avoided or exploited. Now, with the season in the rearview mirror, I can present the top ten cornerbacks according to PlayerProfiler’s advanced metrics.

According to playwright Silva Semerciyan, witches can’t be burned. The same could be said in 2020 for Packers cornerback Jaire Alexander. The No. 1 corner on our rankings, Alexander led the position with a 0.0-percent Burn Rate last season. Teams couldn’t find a way to beat him deep, but they also discovered that he wasn’t in the mood to give up much in the short to intermediate areas of the field either. He had a league-leading 18 Pass Break-ups and allowed a meager 5.4 (No. 3) Yards per Target.

Alexander gave up five receptions for 71 yards in Week 1, mostly matched up against Adam Thielen. In the next 14 games of the season (he missed one with a concussion), he allowed more than this tally just once. Even in allowing seven catches for 76 yards against the Colts, he had three pass breakups. He had four such games throughout the season. In Week 12, with Allen Robinson for company, Alexander allowed just five receptions for 47 yards on 12 targets.

Alexander will be heading into a contract season in 2021. Another year at or near the top of our rankings should see him earn a bumper payday, somewhere along the lines of the next player in our rankings.

The 2020 season got off to a sticky start for Jalen Ramsey. In Week 1, he gave up nine receptions for 114 yards against the Dallas Cowboys. He bounced back though, with nine combined receptions allowed in his four games for a total of 52 yards. He defended an average of 36.9 routes per game, and coincidentally allowed that exact number of receiving yards per game.

Ramsey held a host of the NFL’s best wide receivers in check throughout the season. In two games matched up against DeAndre Hopkins, he was targeted 20 times, allowing 10 receptions for 76 yards combined. He was No. 7 among qualified cornerbacks with a mere 6.0 Yards per Target allowed, while his 10.1 Yards per Reception Allowed was the eighth-best mark. These marks made him a destroyer of fantasy production. He gave up just 0.22 (No. 3) Fantasy Points per Cover Snap and 1.30 (No. 4) Fantasy Points per Target.

Xavien Howard enjoyed a season for the ages as one of the lynchpins of the Miami Dolphins defense. Quarterbacks found little success when looking his way in 2020, with targets in his direction earning the passers a rating of just 51.4. This was No.1 among all cornerbacks. Howard took the term “coverage” to bold extremes, allowing (if that’s the right word) 0.68 (No. 2) yards of average Target Separation.

Howard ranked No. 6 in both Coverage Rating (+47.6) and Catch Rate Allowed (52.5-percent). This was thanks in no small part to his ability to get his hands on the ball. He broke up 17 passes, one fewer than Jaire Alexander, and also logged 10 interceptions. He had streaks of four and five consecutive games with an interception during the season. 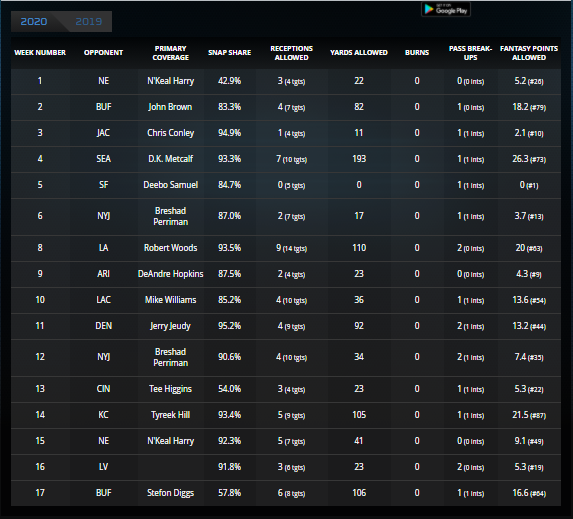 Howard did have three absolute stinkers in 2020, which we have to acknowledge. He allowed 193 yards and 26.3 (No. 73) fantasy points in Week 4, matched up mostly with D.K. Metcalf. There were also 110 yards and 20.0 (No. 63) fantasy points allowed against Robert Woods and the Rams in Week 8. Then Tyreek Hill and the Chiefs took 105 yards off him in Week 14 to the tune of 21.5 (No. 87) fantasy points. Howard also didn’t exactly enjoy his two games against the Bills last season. Across the two games, he allowed 10 receptions for 188 yards.

In two games spent mostly keeping A.J. Brown company against the Titans, Rhodes allowed a combined two catches for 28 yards. When lined up against Chase Claypool in Week 16, he surrendered just five receptions for 30 yards. Yet, inexplicably, when tasked with keeping Chad Hansen of the Texans quiet, he was torched for 101 yards on eight receptions. The mystery surrounding this performance should not overshadow a season spent closing the Rhodes once again.

The defining image of Denzel Ward in 2020 maybe Travis Kelce putting him on ice skates during the AFC Divisional Round match between the Chiefs and Browns. But Kelce has made many a cornerback or safety look stupid, so no reason to forget the fine work Ward put in over the campaign.

Ward finished the season with a +72.0 Coverage Rating, No. 1 among qualified cornerbacks last year. He also led the way with a miserly 4.4 Yards per Target allowed. Not satisfied with this, Ward allowed just 36 of the 80 targets sent his way to be completed, a league-best completion rate of just 45.0-percent. Those looking his way posted a passer rating of just 64.2 (No. 3) in 2020.

The Baltimore Ravens boast two of the best big money cornerbacks in the game in Marcus Peters and Marlon Humphrey. But it was a third member of their defensive backfield who showed out the most last season. Veteran Jimmy Smith came in at No. 6 in our rankings, and no cornerback in the top ten allowed fewer Fantasy Points per Game than Smith’s 3.7 mark.

Smith wasn’t exactly peppered with targets in 2020, with quarterbacks looking his way just 45 times last season. But only 21 of these were completed, an impressive Catch Rate of 46.7-percent. He only had two Pass Break-ups, but he didn’t allow a single touchdown in his coverage while only surrendering 4.3 Yards per Target.

Smith’s most generous game of the season came in Week 3 when he allowed five receptions for 62 yards, but it wasn’t a wide receiver who did most of the damage. The player Smith was lined up against that day was tight end Travis Kelce.

It wouldn’t be fair to label L’Jarius Sneed as a slot specialist, but he did play inside on 23.9-percent of his snaps last season. This was the highest rate of anyone inside the top ten. Sneed played in nine games as a rookie and he was called upon to defend just under 20 routes per game.

Sneed got off to something of a hot start, allowing just seven receptions on 14 targets in his first three games. He also chipped in with a Pass Break-up in each game and notched his first career interception in Week 2. But he broke his collarbone in Week 3 and missed six games. He returned to play between Weeks 11 and 16, but he played more than 48.4-percent of the snaps in a single game just once. In that game, he allowed just two receptions on seven targets for 29 yards and picked off a pass.

All told, Sneed finished his first year in the league with a +47.6 Coverage Rating, four Pass Break-ups, and two interceptions, while giving up only 5.1 Yards per Target.

Joe Haden was a steadying presence on one of the league’s best defenses in 2020, finishing the campaign at No. 8 in our rankings. He finished at No. 4 in Coverage Rating with a +52.3 mark. He was also No. 4 in Catch Rate Allowed, with 43 of the 84 targets sent his way (51.2-percent) making it to a receiver. 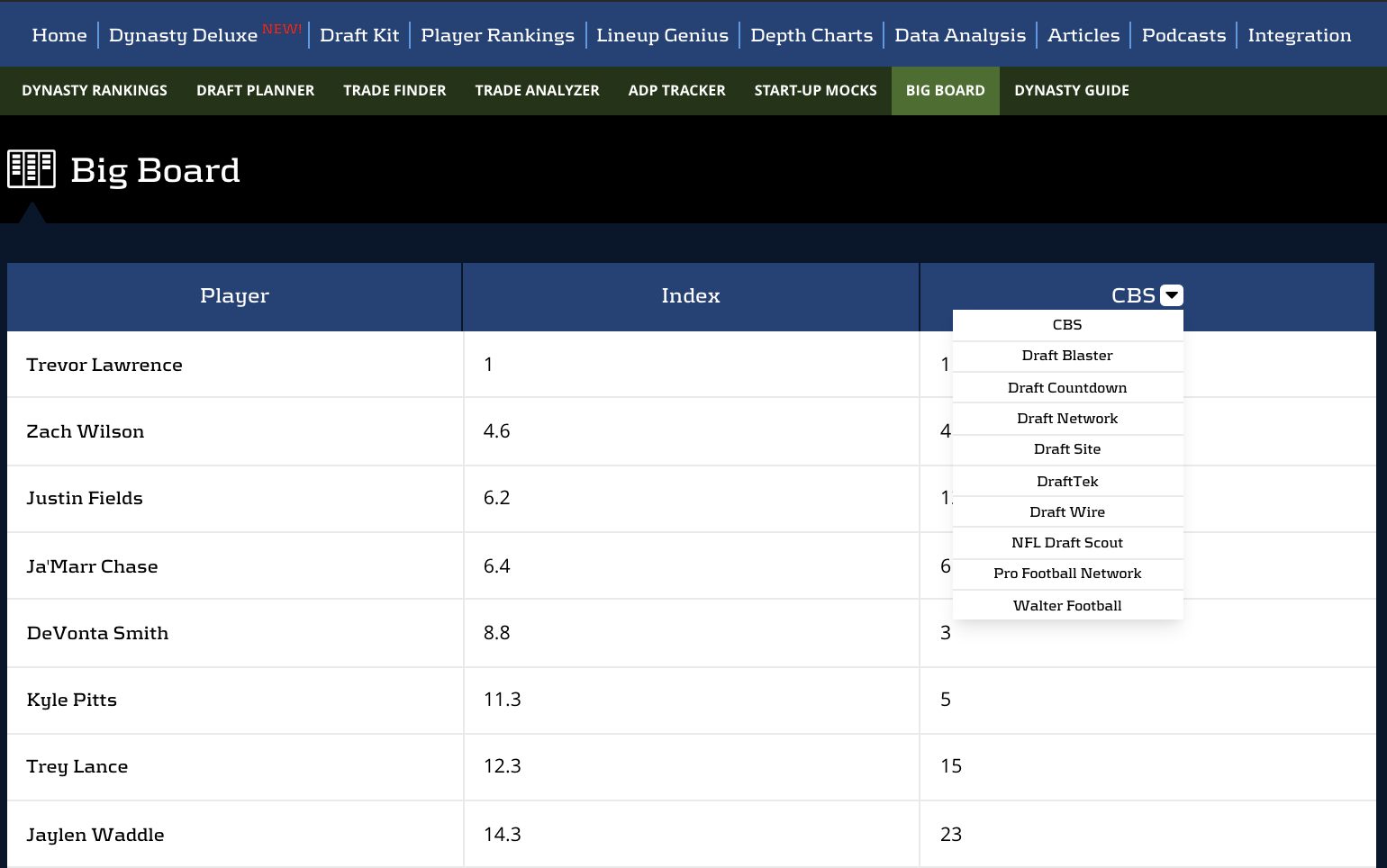 Haden posted 13 (No. 7) Pass Break-ups in 2020, with three in Week 6 against the Browns and another three against the Bengals in Week 10. In his first ten games of the season, he allowed more than 50 yards three times. But in four games between Weeks 12 and 16 (he sat out Week 14 with a concussion), he allowed an average of 65 yards per outing.

When you consider that Bashaud Breeland‘s Best Comparable Player is Xavien Howard, it should come as little surprise that the former also features among our top corners for 2020. Indeed, Breeland is the second member of the Chiefs defensive backfield to earn our praise for his work last year.

Breeland was comfortably inside the top ten at the position in a host of key categories. He allowed just 30 of the 59 passes sent his way to be completed, a rate of 50.8-percent that was bettered by only two players. Only three players allowed a lower Yard per Target average than Breeland’s 5.7 mark, and he boasted a 71.2 (No. 6) Passer Rating Allowed. No cornerback averaged fewer than his 0.22 Fantasy Points Allowed per Cover Snap. This led to his 7.4 Fantasy Points Allowed per Game, making him the second most stingy among all corners in 2020.

Breeland didn’t exactly spend his entire season locked in mortal combat with undisputed alphas, we have to acknowledge. But he went about his business of locking down a large chunk of the players he was tasked with covering. He allowed less than 30 yards receiving in seven games last season and no more than 69 in any one contest.

Xavier Rhodes is not the only redemption story among our top-ranked cornerbacks in 2020. Ronald Darby spent most of the 2019 season decidedly not at the races. Indeed, he resembled a piece of burnt toast for large parts of the season in the Philadelphia Eagles defensive backfield. He allowed an average of 4.7 receptions and 72.9 yards per game, with a 69.3-percent (No. 69) completion rate to boot. Darby allowed seven (No. 71) touchdowns. His Burn Rate was a dismal 4.0-percent (No. 72). There were 73 qualified players who boasted a better Coverage Rating than his -23.8 showing. It came as a shock to no one when the Eagles decided he would be better served seeking alternative employment. Which he did, signing with the Washington Football Team.

I’m not saying, nor are the numbers suggesting, that Darby became the second coming of Deion Sanders once he reached the nation’s capital. But the improvement in his production and efficiency is there for all to see. The completion rate against him fell to 57.5-percent (No. 16). The Burn Rate fizzled down to 1.8-percent (No. 34). He allowed a single touchdown (No. 3) in his coverage, while he logged 17 (No. 2) Pass Break-ups.

The game that summed up the difference between the 2019 and 2020 players came in Week 13 against the Pittsburgh Steelers. When Darby was in an Eagles uniform, a matchup against a player like Diontae Johnson would have had fans of the Eagles sitting up at night in the week leading up to the game, fearful of the approaching storm. Johnson was Darby’s primary assignment for the Football Team, and despite being targeted 11 times, he surrendered just three receptions for 52 yards.