Week 3 came. Michael Gallup won someone a million dollars. Now, Week 4 is upon us.

The goal of the Air Yards DFS Value Index is to determine the best “bang for your buck” in daily fantasy. This is accomplished by utilizing a player’s Air Yards and Air Yards Share to create a weighted Air Yards metric. We then compare this metric with each player’s DFS salary to create a Value Score. The best value Air Yards play on the week is always scored with a value of 100. All other players are compared against that player with decreasing value. This list is not a mere recitation of where each player is ranked — a simple machine could do that. This list contextualizes each players Value Score so as to present the top ten Air Yard values in DFS for the week focusing on players priced at or below $5,500 on Draft Kings.

Again, we will highlight two wide receivers on the Air Yards Value Index priced above $5,500 and then focus on the top ten Air Yards Value Plays priced at $5,500 or below on Draft Kings.

Is it really paying up when D.J. Moore is priced at $5,600 or is it just outright theft? The Air Yards Value Score leader entering Week 4, Moore has thus far failed to meet expectations this year, posting only one fantasy WR1 week.

With 139 (No. 19 among qualified wide receivers) Unrealized Air Yards, a WR1 week is coming soon. Look for Moore to get back on track this week against the Cardinals.

Thielen remains in the top five in the relevant Air Yards metrics listed above and remains a solid play. He is priced as if his 29.0 fantasy point explosion in Week 1 never happened.

Robby Anderson continues to shine in Carolina opposite D.J. Moore. However, the former New York Jet only saw 24 Air Yards in Week 3 against the Chargers. While this is a cause for concern, Anderson continues to outscore Moore on the season, averaging 17.3 (No. 12) Fantasy Points per Game to Moore’s 12.6 (No. 34) mark. He makes for an interesting contrarian Week 4 stack with his teammate Moore against the fast-paced Cardinals.

Coming off a Week 3 where he finished as the WR13 in fantasy and led the Bengals with 150 Air Yards, Tee Higgins appears to be fully acclimated to the Bengals offense.

Many may look at last week’s box score and think that Andy Isabella played in place of the injured Christian Kirk. Though it was actually Keesean Johnson who saw more snaps than Isabella and finished Week 3 with a team-high 112 Air Yards. With both Kirk and DeAndre Hopkins hobbled, feel free to take free money and insert Johnson into your lineup for the stone cold minimum if either or both miss Week 4 due to injury.

Scott Miller was the prime beneficiary of  injuries to Justin Watson and Chris Godwin. He led the Buccaneers with 135 Air Yards in Week 3 en route to double digit fantasy points. 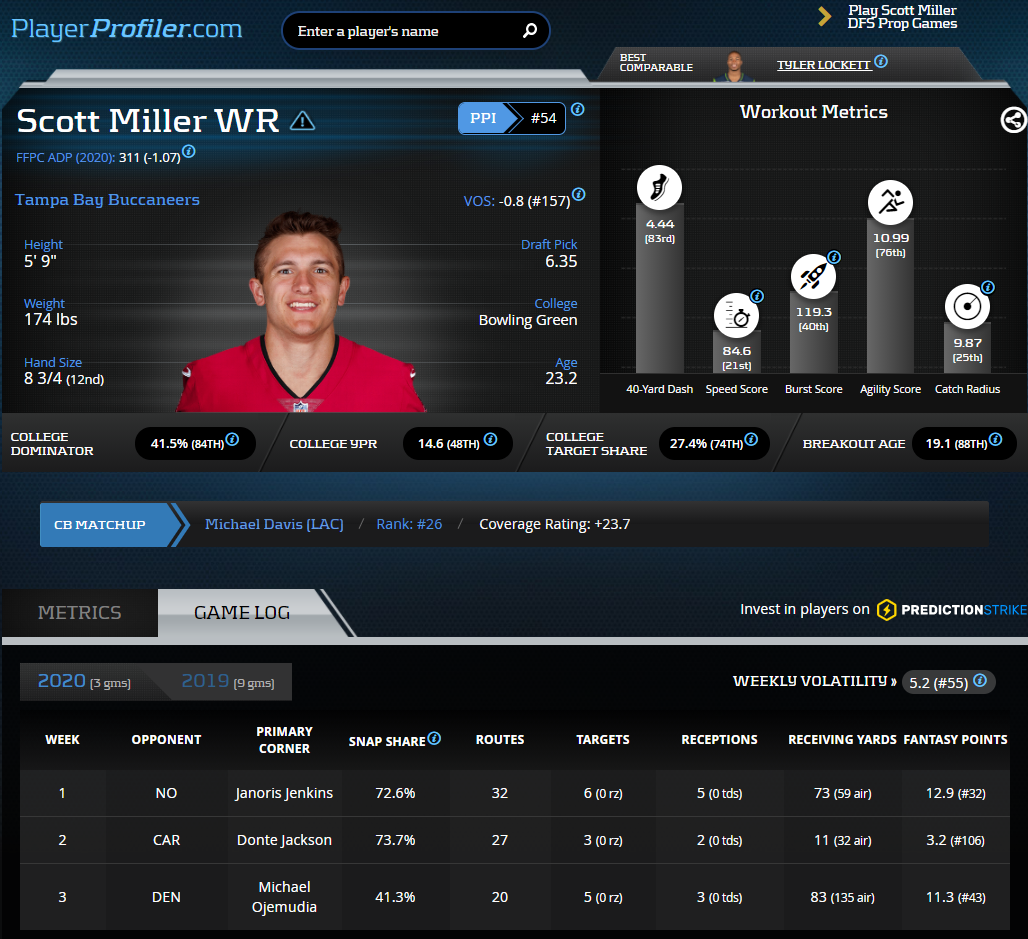 With Godwin slated to miss Week 4, Miller will look to capitalize on the opportunity again. However, Miller has been unable to practice all week with a hip injury. If he is unable to go, a now-healthy Watson, priced at $3,500, will be the best Week 4 value play on the Bucs.

Even after missing Week 3 with a groin injury, Christian Kirk remains near the top of the league with 132 (No. 21) Unrealized Air Yards. While he continues to be limited with the same groin injury this week, he remains likely to play against the Panthers. Assuming Kirk plays, he remains a great value that will eventually realize his Air Yards.

Soon to be 31 years old, T.Y. Hilton has yet to post double digit fantasy points this season. However, that outcome is not because of the lack of opportunities, with Hilton having a 35.9-percent (No. 9) Air Yards Share.

With promising rookie Michael Pittman joining Parris Campbell on the sidelines for Week 4, Hilton will continue to soak up an even greater share of the Colts Air Yards moving foward.

Chris Conley‘s presence on this list is primarily fueled by his usage last Thursday where he saw 162 Air Yards, more than tripling his season-long number in one game. He will only remain fantasy relevant so long as D.J. Chark misses games. With Chark practicing in a limited capacity this week, Conley’s presence on this list may be more indicative of the fantasy points coming Chark’s way than anything else.

John Brown has formed a formidable one-two punch with new teammate Stefon Diggs as part of a revamped Buffalo passing attack. While Diggs has averaged 20.6 (No. 6) Fantasy Points per Game to Brown’s 12.4 (No. 37) mark, it’s Smokey who leads the Bills in Air Yards through three weeks.

Unfortunately, Brown injured his calf in Week 3 and posted the dreaded doughnut. However, he is practicing and looks ready to roll for a Week 4 contest against the Raiders. With 171 (No. 11) Unrealized Air Yards, this may finally be the week where Brown outscores Diggs in fantasy points.

Darius Slayton continues to be the No. 1 passing option for the Giants, leading the team in Air Yards every week this season.

After booming in Week 1 with 28.2 fantasy points, Slayton has finished with a consistently bad 6.3 points in each of the past two weeks. A Week 4 matchup against Jalen Ramsey and the Rams does not appear to be an ideal situation for Slayton to bounce back.

October is here, which means Halloween is just around the corner. What better way greet the holiday than with the ghost of A.J. Green atop the top-10 Air Yards Value Play list.

Father Time has appeared to catch up to the former perennial Pro Bowl receiver. While I hope I’m wrong about this assessment, it’s hard to ignore Green’s -45.8 (No. 89) Production Premium and the ascent of Tee Higgins last week. Green is a truly frightening play despite the value.

Good luck to all in Week 4. May all your Air Yards be realized.