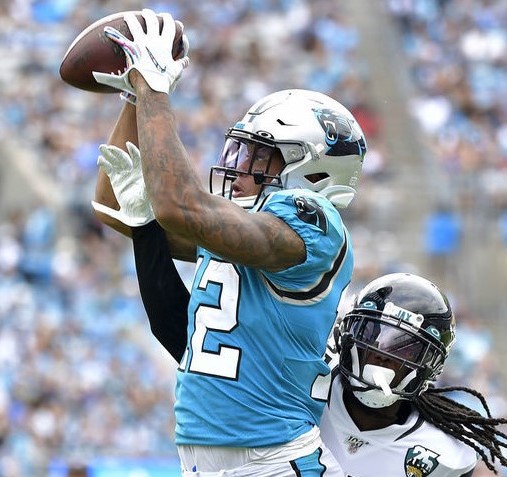 We did it fantasy gamers. We made it to Week 1. Dust off of those daily fantasy accounts and get back in the lobby to chase those big-time cash payouts. I will be here weekly to help you with that using the best advanced metrics and stats only PlayerProfiler could provide.

Stacking: What and Why

This series will focus on one aspect of the DFS roster building experience: QB-WR stacks. A stack is when you roster a QB and at least one WR on the same team. In daily fantasy, stacking is a popular approach to building lineups for cash games and Guaranteed Prize Pool (GPP) tournaments. Stacking leverages your possible fantasy point ceiling. In contests where you’re looking to maximize your upside in order to take home the largest prizes, getting exposure to multiple complementary players in an offense expected to overperform that day is a sound strategy.

This strategy isn’t purely for the boom or bust nature of GPP’s either. In Head to Head and Double Up (so called Cash games), stacking can be an effective way to inject upside in your roster while also reducing the number of game situations you have to get right. Rather than predicting game state for a QB and a WR in another game, the correlation in fantasy scoring between a QB and a WR on the same team means both will be favorably positioned to score fantasy points if the game state is predicted correctly.

Each week I’ll highlight stacks to target and recap the performance of the previous week’s recommendations to continually improve. Note that the prices and ownership percentages I cite will be from DraftKings. However, the stacks are worth targeting across all platforms. With the introduction out of the way, let’s dive into W eek 1.

The first appealing stack opportunity features Teddy Bridgewater and D.J. Moore facing the Las Vegas Raiders. With Teddy ($5900) priced outside the top 12 QBs, Moore’s elevated salary ($6600) becomes more palatable. Sportsbooks have the Raiders favored by a field goal, which means the Panthers will be forced to throw often. Moore will vacuum up targets against a particularly weak secondary. The Raiders finished as the No. 10 most favorable for opposing WRs and No. 5 for QBs.

Bridgewater making his first start for a new team may scare some fantasy gamers off him. In relief of Drew Brees last season, he showed he can be a solid fantasy option capable of supporting elite WR fantasy play. From Weeks 5-7 before exiting early in Week 8, he finished as a top ten QB twice. Over that same stretch. Michael Thomas finished as the WR2, WR15, and WR5. Moore and Thomas operate similarly in the intermediate area of the fieldm as evidenced by middling Average Target Distance but with elite Contested Catch Rates. Favorable game state, favorable matchup, and depressed price. These are the ingredients for a stack to smash.

Is it cliché to recommend playing DeSean Jackson in a GPP? Maybe, but if there were a time to do so, it would absolutely be this week. The Eagles depth chart is completely barren going into this game except for a healthy Jackson, Greg Ward, and J.J. Arcega-Whiteside. Their opponent, the Washington Football Team is breaking in a new coaching staff and not expected to be a competitive squad this year. They were the No. 11 most favorable team against opposing WRs and No. 7 against QBs.

The Eagles are favored to win this game, and if that happens it will have to run through Carson Wentz and Jackson with Miles Sanders still nursing a lower body injury and Alshon Jeffery and Jalen Reagor unlikely to play. Wentz ranked highly in Deep Ball Attempts with 69 (No. 10 among qualified quarterbacks), but not in efficiency, with a 34.8-percent (No. 19) Deep Ball Completion Percentage. He clearly missed Jackson’s field stretching ability. In 2018, Jackson ranked No. 2 in both Yards per Reception (18.9) and Average Target Distance (18.9). Don’t forget what he was able to deliver the last time he was healthy in Week 1. Talk about upside for only $4900.

Stacking Kyler Murray with Christian Kirk is a deeper GPP play this week where we expect lower ownership for two reasons. The first is the addition the Cardinals made this offseason in DeAndre Hopkins. His presence strongly affects the Target Share projections for everyone else in that offense. The second is the matchup. San Francisco was a stifling defense last year and looks to be one again, especially in the secondary that returns Richard Sherman and Emmanuel Moseley. They were bottom 10 in terms of favorable opponent matchups for both QBs and WRs.

The headwinds are undeniable, but we have to steer away from some obvious plays in GPP tournaments when we want to differentiate our rosters from the rest of the field. That’s not the only reason to play this stack though. Yes, the 49ers are a formidable defense, but this is the first week of the season without any preseason games to get acclimated. The Cardinals are also a touchdown underdog. They will have to throw a ton, and given that Hopkins has been missing practices, Kirk could be the target leader.

The matchup has been baked into the price as well. Murray ($6400) is the seventh-most expensive QB on a slate without Patrick Mahomes, Dak Prescott, or Deshaun Watson. Kirk ($5000) is the WR34 by price. We could be looking at Kyler throwing 40-plus times while chipping in some rushing yards and Kirk getting 10-plus targets all for under $12K. This stack gives us differentiation, potential for huge volume with big play upside, and keeps our budget open for other favorite plays.

Each slate presents countless opportunities for stacking. When deciding between one QB and another for daily fantasy, often a good tie breaker is which possesses the stronger stacking option. Several aspects to consider are projected game state (will the QB be forced to throw a lot), matchup (does the WR project to face a certain corner for the majority of his routes?), WR Target Share (you want the WRs who are most likely to have a big day conditioned on the QB already having a big day), and price (stacking Drew Brees and Michael Thomas projects to score huge points but may not leave you with enough budget to fill out the rest of your roster).