Free square running backs refer to RBs that come in severely underpriced relative to their projected roles. These players are often priced at the stone-minimum, opening up the DFS slate to jam in the premium plays. DraftKings has raised the salary floor for running backs this season from $3000 to $4000, so spotting these freebies is paramount if we want to afford the high-floor, high-upside smash plays. Using PlayerProfiler’s advanced stats, metrics, and analytics, we can identify RBs that fit the criteria. Here are the free square RBs for the NFL Week 1 DFS main slate.

When a head coach and general manager hype up an undrafted rookie running back all summer, it’s typically safe to ignore their comments. This is not one of those times. James Robinson, an undrafted rookie RB out of Illinois State, sat at the bottom of the Jacksonville depth chart in August. The team finally dumped Leonard Fournette and Robinson leaped Chris Thompson, Devine Ozigbo, and Ryquell Armstead on the most recent depth chart. Given his player profile, this shouldn’t be a surprise.

Robinson has a solid frame at 219-pounds with a 32.3 (88th-percentile among qualified running backs) Body Mass Index. What he lacks in speed with a 94.5 (42nd-percentile) Speed Score, he makes up for in explosiveness, possessing a 130.5 (92nd-percentile) Burst Score and a 127.5 (89th-percentile) SPARQ-x score. His collegiate production matched his athleticism, compiling 4,890 scrimmage yards with a 1,917-yard rushing season. Robinson also flashed soft hands, with 58 receptions in his career.

With the coaches in his corner and the first crack at opportunity, Robinson looks the part of a free square RB for Week 1. Jacksonville won’t experience much positive Game Script against Indianapolis, but that will be a good thing for Robinson. The Colts allowed an NFL-leading 109 receptions to opposing running backs last season. With Armstead and Ozigbo both looking iffy for Week 1, Robinson will only contend with Thompson, the journeyman pass-catching specialist, for touches in this decent matchup. Any time you can get a min-priced RB that projects for a sizable Opportunity Share, you should pounce.

All has been quiet on the David Montgomery front. The sophomore RB hasn’t done much more than stretching in practice, paving the way for Tarik Cohen to have a significant role in Week 1. Cohen won’t command 20 touches at 5-6, 179-pounds, but that’s not why we want to play him. In his two NFL seasons, he has finished in the top six of RBs in both targets and receptions, and has six games with double-digit targets.

The Bears are three-point dogs, according to the DraftKings Sportsbook. They also have a solid game total of 43.5, meaning this should be a competitive game that features back-and-forth scoring. Cohen only has Ryan Nall, a converted TE, and Cordarrelle Patterson, a converted WR, to compete with. While he’ll grab all the receiving work, he could easily lead the team in rush attempts as well. Given his 4.42 (95th-percentile) speed, he can rip off chunk plays through the air and on the ground. This has given him significant upside throughout his career. He has four games with 20-plus fantasy points, including two 30-point outings. When the Bears get behind Detroit’s explosive offense, Cohen will be on the field early and often. He’s primed to smash in DK’s full PPR format at just $4900 if Montgomery sits this contest out.

In the wake of Derrius Guice’s fall from grace and Adrian Peterson’s release, the world is in on Antonio Gibson. The Swiss Army Knife out of Memphis is a dynamic athlete, with a 122.8 (99th-percentile) Speed Score at 6-0, 228 pounds. He only carried the ball 33 times in his college career, but broke 77 tackles on the ground thanks to his combination of size and speed. His pass-catching upside cannot be understated. A converted WR, Gibson hauled in 44 receptions for 834 yards at Memphis. That’s right: He averaged nearly 19 yards per reception. Factor in his 11.2 (99th-percentile) College YPC and skills in the return game and were looking at one of the most dynamic weapons to grace a football field. 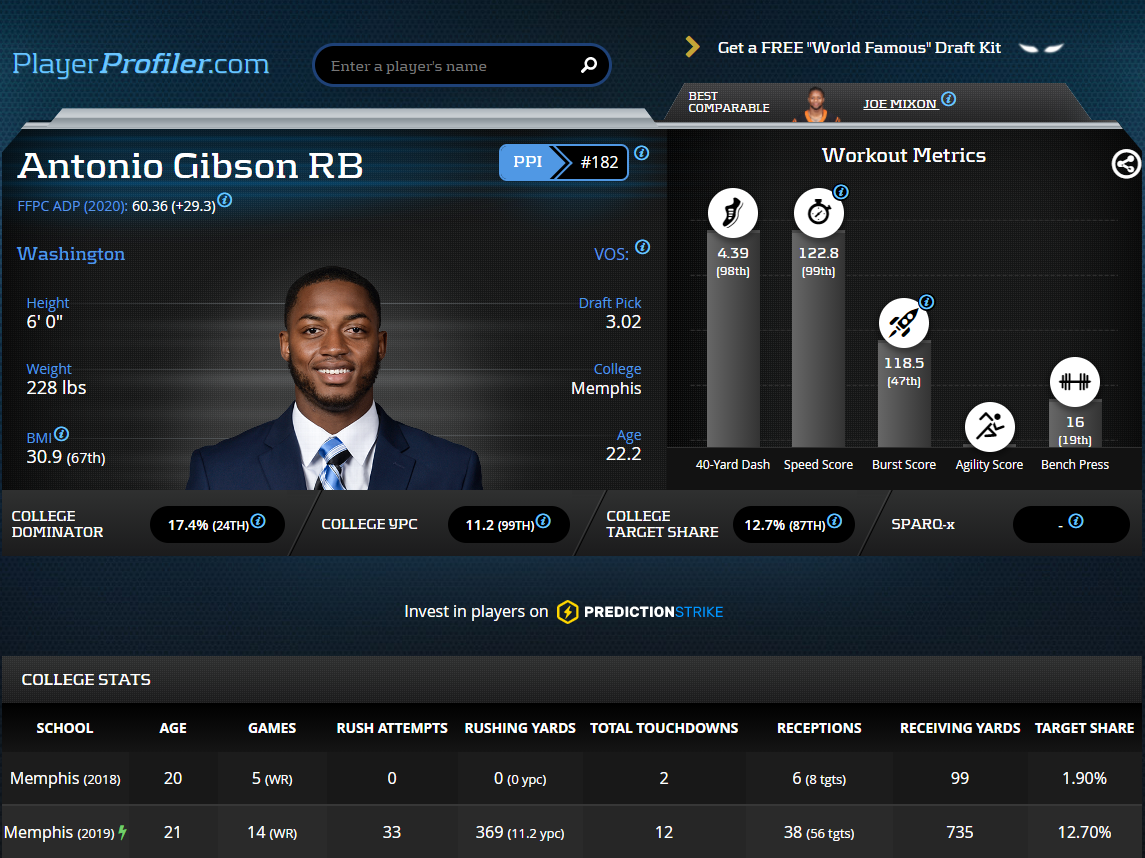 The best argument for rostering Gibson is the wasteland of talent in Washington. Outside of Terry McLaurin, Washington has no legitimate WR2, TE1, or RB. They need to formulate touches for their best athletes, meaning Gibson should naturally see a sizable chunk. This is also an underrated game environment. The total sits at just 43, but both of these defenses feature strong fronts and weak secondaries. Washington should lean on their quick passing game to limit the effectiveness of Philly’s pass rush. Whether they choose to line him up in the slot, pound him between the tackles or set him up for some slip screens, Gibson will be a major part of the game plan. Expect double-digit touches from the rookie.