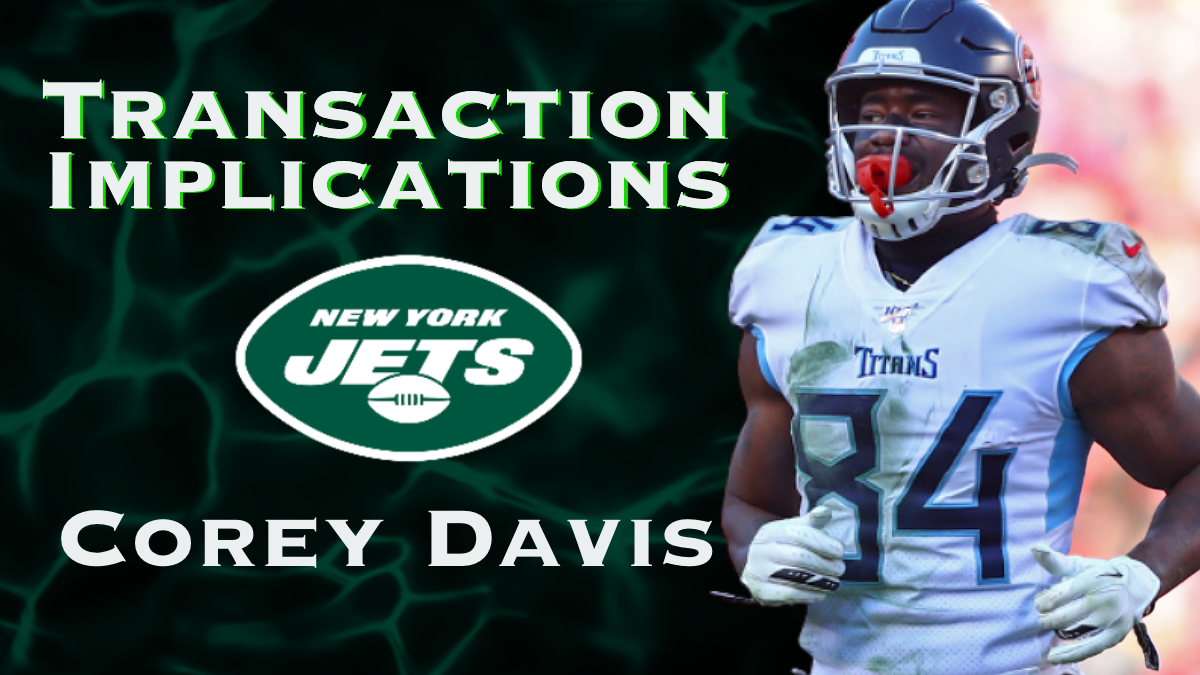 Last year in my debut piece for PlayerProfiler, I dubbed Corey Davis as “Corpse” Davis. He responded to my jab by barely missing 1,000 Receiving Yards as the secondary target on a run-first team that averaged 31.8 (No. 30) Team Pass Plays per Game this past season. Excuse my lack of alacrity (editors note: great word) as I prepare a redemption article of sorts on Davis, but as an analyst, it is my duty to prepare readers for the future.

The No. 5 overall pick in the 2017 NFL Draft is now a New York Jet, and there are questions needing answers regarding his dynasty outlook heading into the 2021 season. Is this a DeVante Parker corollary? If so, should dynasty managers look to acquire Davis or trade him away? Now that PlayerProfiler 2020 rookie darling Denzel Mims has better receiving competition for targets than Jeff Smith and Josh Malone, what is his dynasty outlook? Using PlayerProfiler’s advanced stats and metrics will help us answer these questions.

The only part of Corey Davis‘ three-year, $37.5 million contract that is NOT guaranteed is his 2023 base salary. This means that for the upcoming 2021 and 2022 seasons, he isn’t leaving the New York Jets even if he flops. Or, at least, he’s not a cap casualty that can create salary-cap space. 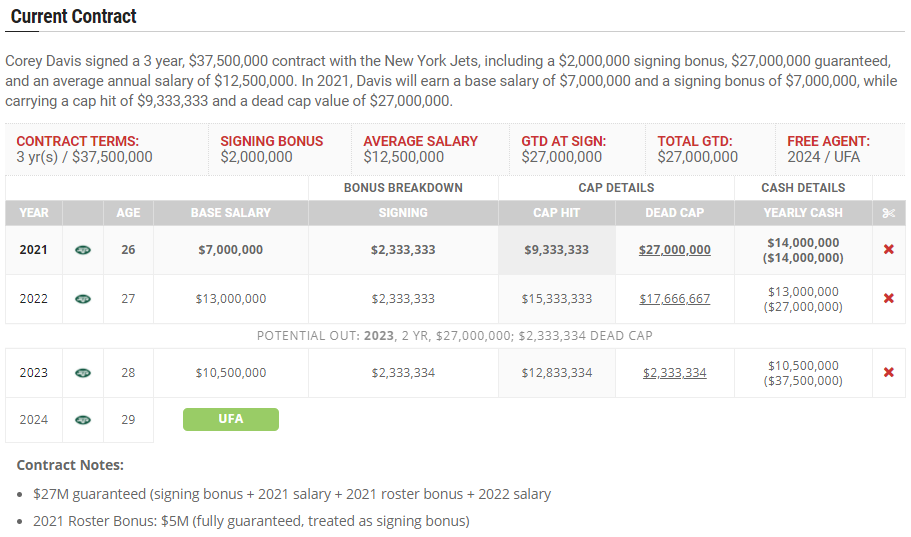 If released or traded next offseason, Davis will cost the Jets $2.33 million more on their salary cap than if he remained on the team. If he fails to live up to the team’s expectations as their No. 1 wide receiver, they can release him in 2023 and save $10.5 million in cap savings. 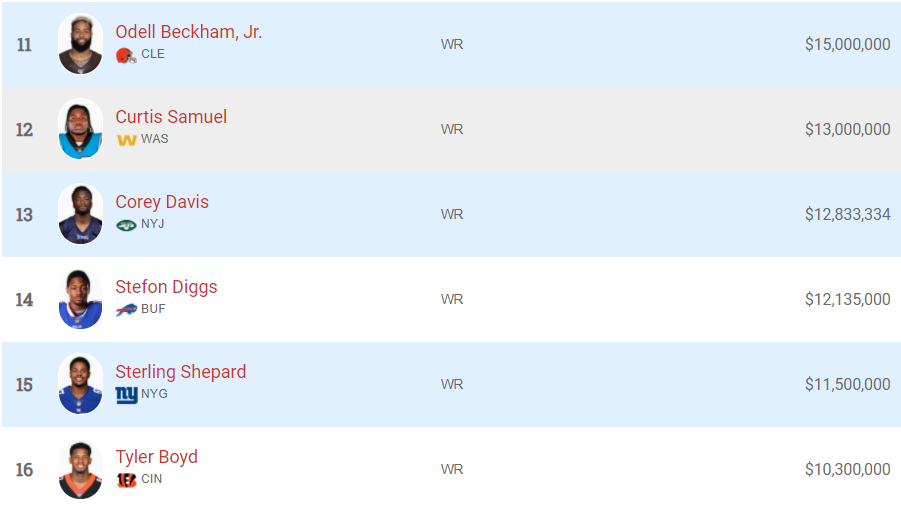 The final year of Davis’ contract will see him carry a $12.83 million cap hit on team’s salary cap in 2023. Among wide receivers that signed free-agent contracts this offseason, that ranks No. 3 behind Kenny Golladay ($21.4 million) and Curtis Samuel ($13 million) thanks to top-tier wide receivers inking one-year contracts. With future free-agent wide receivers in 2022 and 2023 such as Davante Adams, Chris Godwin, Allen Robinson, Tyreek Hill, Calvin Ridley, and D.J. Moore set to exceed that cap hit in 2023, Davis’ cap hit will remain reasonable for a mid-tier No. 1 wide receiver.

Despiting struggles with injuries, specifically of the soft tissue variety, and a career-worst 5.5 Fantasy Points per Game average in his fourth season in 2018, Parker put together an unprecedented fifth-year breakout with 15.4 (No. 14 among qualified wide receivers) Fantasy Points per Game in 2019. Finally playing 16 games, his combined efficiency and opportunity salvaged his sinking Lifetime Value. His +18.4 (No. 14) Production Premium and 30.7-percent (No. 5) Target Premium allowed him to maximize his 128 (No. 13) Targets on an offense that averaged 42.1 (No. 4) Team Pass Plays per Game.

As mentioned earlier, Corey Davis did not benefit from a pass-heavy offense this past season. However, his 23.1-percent (No. 24) Target Share and 32.6-percent (No. 20) Air Yards Share in the opportunity metrics displayed what he can do in an offense with more opportunities. 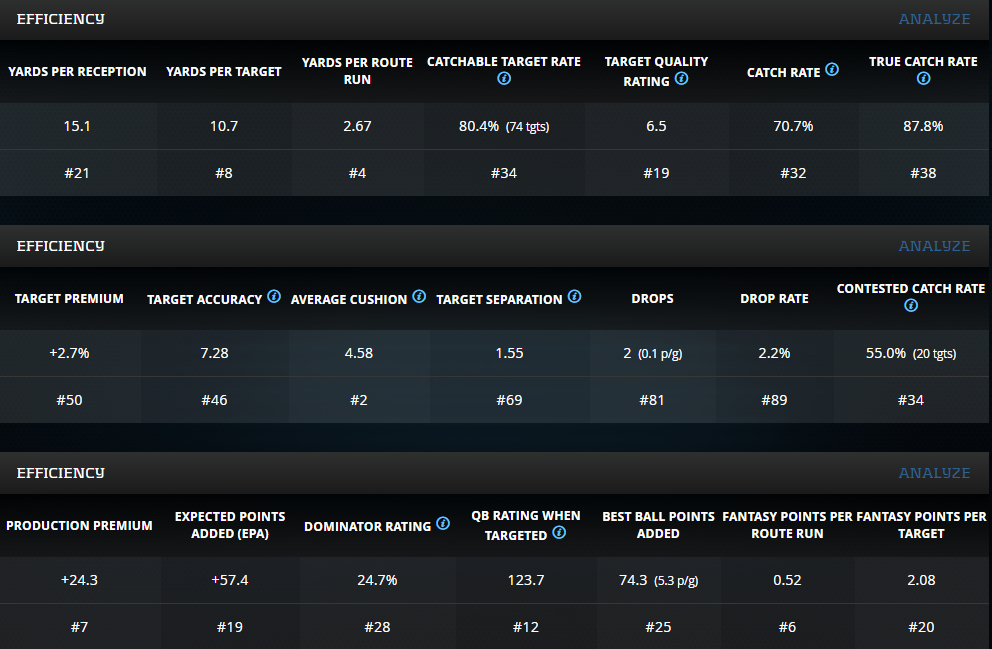 Parker and Davis are both 6-3, 209-pound wide receivers. Like 2019 Parker, Davis is a former first-rounder entering his fifth professional season in 2020. Both players finished their collegiate careers with impressive College Dominator Ratings in the 92nd-percentile or higher. They even share a common player in Larry Fitzgerald among their list of Best Comparable Players.

Despite a career-best 13.7 (No. 32) Fantasy Points per Game average and top-notch efficiency, Davis has failed to break out in his career according to the Breakout Finder. He missed the 200-point PPR mark by less than nine points, and fell short of the 1,000 yard receiving mark by 16 yards. Truly heartbreaking. Will he pull a Parker fifth-year breakout? Or will “Corpse” Davis return to the catacombs?

Now is the time to foist (editors note: great word again) Corey Davis to leaguemates. Despite an expected increase in his 92 (No. 42) Targets from 2020, his efficiency will be tough to replicate without Ryan Tannehill‘s 121.1 (No. 2) True Passer Rating. A Breakout Rating below 20.0 shows that banking on Davis to finally break out in Year 5 is irrational. He’s a JAG receiver and isn’t helping people win games. He’s a perfect throw-in in trades to acquire your target. 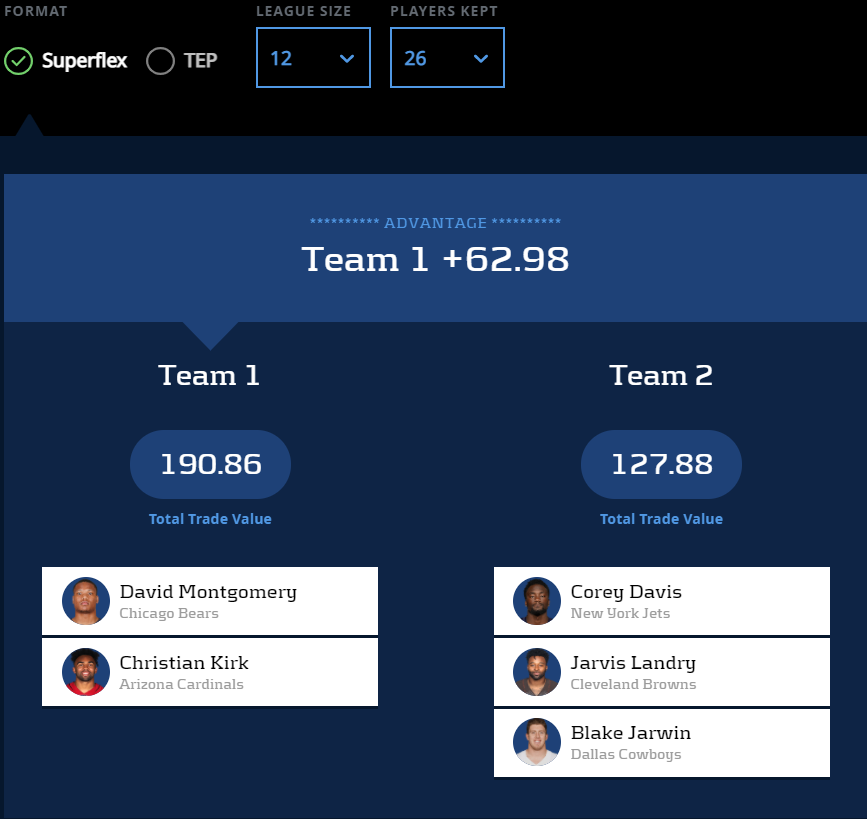 Remember Chris Godwin? He averaged 5.8 Fantasy Points per Game during his rookie season and 33.0 Receiving Yards per Game. He showed promise, but still had a reasonable acquisition price in the offseason. If you didn’t buy him after that season, then the price skyrocketed after he recorded at least 800 yards and seven touchdowns in each of the following three, despite missing games and playing alongside Mike Evans. 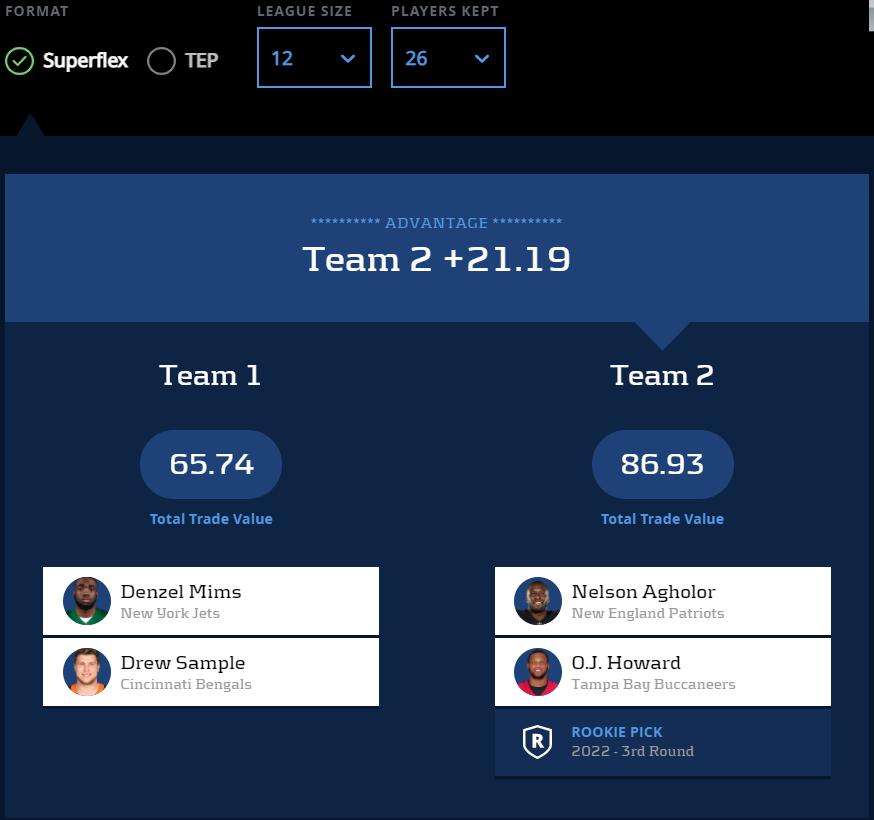 Denzel Mims Trade Analyzer (Sample Stinks, But Mims Is Worth This Cost)

Mims averaged 6.5 (No. 91) Fantasy Points per Game and 39.7 (No. 73) Receiving Yards per Game in 2020 and is best comparable to Godwin. Davis is on a DeVante Parker career arc and both are far from being Evans. Don’t buy Godwin at a premium when Mims is available at a fraction of the cost. Managers with Davis need to know that the numbers aren’t in their favor. Take advantage of his 2020 advanced stats and move on from him or be stuck with a roster clogger.