Every year, fantasy football is introduced to a breakout tight end that went late or undrafted at the beginning of the season. In 2019, it was Mark Andrews and Darren Waller, both currently being picked inside the top 50 in FFPC drafts. The 2018 season was a colossal disaster at the position, but Eric Ebron’s 14 touchdowns made him the fourth-highest scoring tight end that season. Which tight end will be that late round league winner in 2020? PlayerProfiler’s advanced stats and metrics point to one name going outside the top 100 in redraft leagues. A player set to be the most owned tight end on league-winning teams in 2020. That player is Jonnu Smith.

Jonnu Smith’s dynasty owners have watched his role with the Titans grow from his rookie season to this past season. His improvement from 2018 to 2019 was both from a statistical and efficiency standpoint. His targets increased from 31 to 45, and his yards after the catch increased by 102 yards. That equates to a 7.3 YAC/target difference. While a small sample, it proves that his 5.6 Yards After Catch per Target in 2018 is his floor. His YAC ability is key to him becoming a top 10 fantasy tight end in 2020. His Average Target Distance went down from 2018, but his 9.8 Yards Per Target ranked No. 2 among qualified tight ends last season. Put the ball in his hands and he will make the most of that target.

Smith is not just a YAC player though. He improved as a route runner and receiver too. His Drop Rate decreasing as his targets and role in the Titans offense grew is encouraging. Quarterbacks won’t throw the ball to a player if they can’t squeeze it. They also won’t throw the ball to players who can’t get open. The amount of Cushion given to Smith by NFL defenders increased from 2018, showing that they respected his ability to get past them. Though, with his yards of average Target Separation also increasing, it didn’t matter. NFL defenses cannot stop him from getting open or creating after the catch.

Jonnu Smith is an amazing football talent, and the Titans realized this halfway through the season. Fantasy football production is all about opportunity, and Corey Davis won’t prevent Smith from ascending in this offense and become the No. 2 passing option in a NFL offense in 2020. Let’s go back to a three-week stretch from last season when Ryan Tannehill took over the starting QB gig from Marcus Mariota and became the missing piece of their offense: 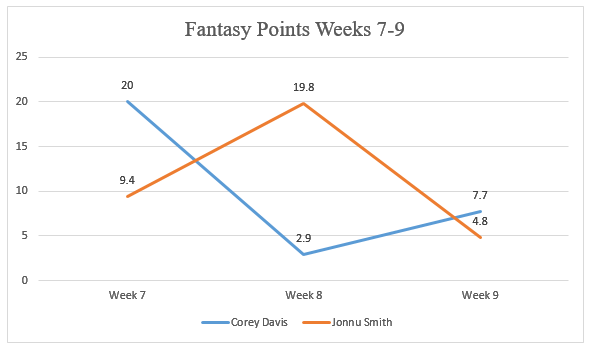 Both players caught 12 passes during this three game stretch. However, Smith held the advantage in yards and fantasy points averaged per game, displaying the same upside in fantasy point-scoring. A.J. Brown was cemented as the No. 1 receiver, but Davis was not the definitive No. 2. Davis and Smith were options 2A and 2B at this point of the season. The difference was that Davis’ role was trending down while Smith continued to trend upwards. For comparison, here are the pre-Tannehill Titans fantasy points at the beginning of the season. 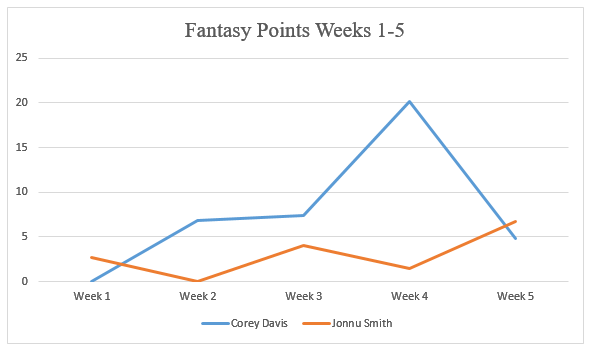 The pre-Tannehill Titans received one top 60 fantasy performance from Davis during a time where Brown was being outsnapped by the likes of Tajae Sharpe and Adam Humphries. While Smith was splitting snaps with respected veteran Delanie Walker. 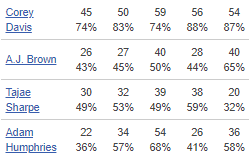 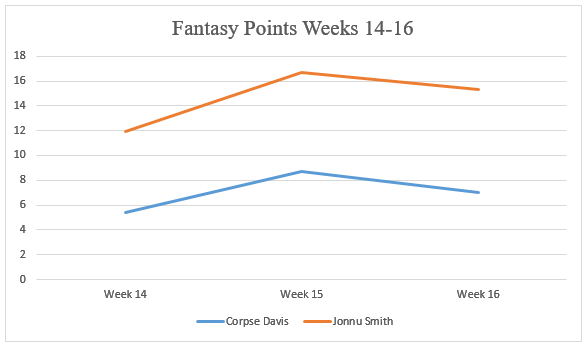 Random tight ends can end up with TE1 weeks any week of the season, but those that can put together three consecutive weeks with TE1 numbers are not common. Smith better catch your attention if winning your leagues is something you’re into.

Not only has Jonnu Smith proven to be a good football player who is already the No. 2 receiving option in his offense. His workout metrics on PlayerProfiler illuminated that he would perform at a high level in the NFL the way that he did in 2018 and continued to last year.

With a 130.0 (94th-percentile) Burst Score and 106.9 (83rd-percentile) Speed Score, Smith is the only tight end that can challenge for George Kittle’s YAC ability title, averaging at least 5.0 Yards After Catch per Target in both 2018 and 2019. Smith and Kittle are the only tight ends to do that in both seasons. Speaking of Kittle, pull up his 2019 efficiency numbers and compare them to Smith’s 2019 efficiency numbers.

We want tight ends that can make home run plays any time they have the ball thrown to them. Both were top 10 in important categories at their position such as Yards Per Reception, Yards Per Target, True Catch Rate, and Target Separation. They play the exact same role on their respective teams. Using their athleticism to create separation that generates yards after catch from short target distances from their quarterback. Kittle has the better hands, but Smith is the better contested ball receiver, with an 85.7-percent Contested Catch Rate on seven targets.

Jonnu Smith’s breakout season will not be a surprise, it should be expected. He should be dubbed Donkey Kong, or DK for short, because he is Discount Kittle in 2020 redraft leagues. The analytics and trends throughout the 2019 season are foreshadowing his fantasy football ascent. Enjoy getting him at his ADP outside of the top 100 this season, because it won’t be this low again until he exits his prime. Securing a full-time role in the Titans offense with a quarterback upgrade in Ryan Tannehill, Smith is set to build on his TE1 numbers from Weeks 14-16.