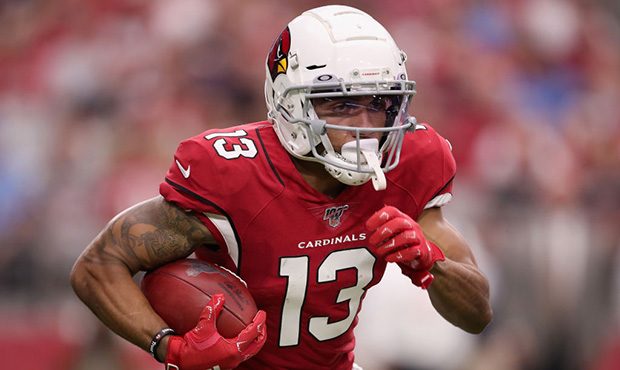 Whether you’re playing safe with a high-profile RB like Christian McCaffrey, or paying for the upside of Michael Thomas and Mike Evans, you’ll need to manage your salaries accordingly on the FanDuel Week 10 DFS slate. The best way to do this is by identifying “lineup makers.” These cheap DFS options give us the lineup flexibility necessary to afford the best plays on the slate. Here are some lineup makers this week based on advanced stats, metrics and analytic player profiles.

The Jets have not given positive signals on Le’Veon Bell‘s knee injury. After he received an MRI, they signed Josh Adams off of their practice squad and held him out of practice Wednesday. Unless he logs a full practice, expect Ty Montgomery to fill in as the lead man.

Montgomery is in a similar spot as Jaylen Samuels was last week. Not only is he is a big back at 6-0, 216 pounds, but he is also a pass-catching phenom. Montgomery’s 31.5 percent College Target Share lands in the 99th-percentile of NFL RBs.

He would likely split early-down work with Bilal Powell, but his size and skill advantage would net him the lion’s share of the work.

A Mark Walton suspension has finally opened the door for Myles Gaskin. The Dolphins know what they have in Kalen Ballage, which isn’t much, so Gaskin should command a significant opportunity share.

The Colts could sputter with an injured Jacoby Brissett, meaning the Dolphins could keep this game competitive. That would give Gaskin extra work at the stone-minimum RB pricing.

Robby Anderson flopped against Miami, only seeing four looks in a prime matchup. He’ll have another shot to hit value this week, as he gets a New York secondary that has allowed the most receiving yards to opposing receivers.

With a 103.2 (79th-percentile) Speed Score, Anderson has the tools to dominate this matchup. If he doesn’t hit this week, it’ll confirm that his prolific production down the stretch of last season was an outlier.

Christian Kirk only saw five targets against a top-ranked 49ers defense, but he still saw a 20.8 percent target share in that game. Kirk has now seen at least 20 percent of Kyler Murray‘s pass attempts in all but one game this season.

He should benefit from inflated pass attempt numbers in this game, as the Buccaneers are No. 3 in team pass attempts and the Cardinals are No. 11. Kirk has a high floor and should hit his ceiling in this game environment.

In his two games as a rookie against the Saints, Calvin Ridley compiled 239 yards and four touchdowns. He was torching them so badly that they opted to shadow him in the second matchup with Marshon Lattimore in favor of the great Julio Jones.

Ridley has already seen at least six targets in all but one game, and with the ceiling he possesses, Ridley is an obvious tournament lineup maker. With Matt Ryan due back under center, the Atlanta offense will be competent enough to keep pace with the electric Saints passing attack.

Marquise Brown has battled injuries throughout the season, but when he’s on the field he is electric. Lamar Jackson also looks for him often, as he ranks No. 8 in both Hog Rate and yards per pass route.

While he has hovered around 50 percent of offensive snaps the last two games, now would be the ideal time to increase his snap rate. The Bengals allow the second-highest explosive pass rate, according to Sharp Football Stats.

Brown is obviously an explosive-play receiver, so if he gets a few deep shots against this secondary he could smash value.

Mike Gesicki may have turned a corner in his young career. The 24-year-old athletic phenom out of Penn State caught all six of his targets for 95 yards against the Jets in Week 9.

He has a chance at continuing that success, as WR Preston Williams was just lost for the season with a torn ACL. The Colts are also allowing the fifth-most FanDuel fantasy points to TEs, so Gesicki should continue to hit his stride with extra targets from Ryan Fitzpatrick.