The NFL experience is about to switch to the inactive stage of its calendar. Where the goal is not to catch passes and score touchdowns, but to stock rosters with the players that will perform those deeds come the fall. Welcome to the offseason, folks.

The NFL Scouting Combine is the next big event on our horizons. But while teams will send their scouts and evaluators to assess the next generation of talent, front offices are also carrying out rigorous examinations of their existing rosters from a 2022 salary cap point of view. A lot of teams have a lot of work to do if they are to be cap compliant when the new league year begins. All teams will get under the cap, believe me. I mean, they literally have to get under the cap. It’s the law. But some teams face a massive struggle to do so while also entertaining hopes of being competitive in 2022.

Here, I will look at three teams whose cap future looks far from rosy as you read these words. Two are a long way over the projected cap, while the other is currently cap compliant. But they face a number of tough choices, almost as many as the other teams, which their limited pocket money will make all the more difficult.

With that, let’s jump in.

Cap Space information is courtesy of Over the Cap.

The New Orleans Saints have been the poster organization for the “Salary Cap Isn’t Real” brigade. For years, they sailed close to the wind. Yet they remained competitive, buoyed by the presence of Drew Brees under center. But in 2022, Brees will be starting his second season as an employee of NBC, and will not be around to right the wrongs of those in charge of the Saints bean counters. Mind you, the Saints will still carry a dead-money hit of $11.5m for him.

The Saints cap situation appears perilous to the outsider. All the more concerning when one considers the weakness of the team heading into the new year. They finished No. 28 in total offense last season. Just their second season outside the top 10 during the entire Sean Payton era. The only quarterback of note under contract in 2022 is Taysom Hill.  His limitations as a passer were all too evident in 2021. He had four games in which he attempted at least 20 passes last season. In those games, he averaged 204 passing yards at 6.6 yards per attempt.

The quarterback issue is of the most concern. Second to this is the need to upgrade the players who are there to catch his passes. Saints wide receivers combined for 163 receptions and 2,179 yards last season. Only four teams saw their wideouts catch fewer passes, with only five amassing fewer yards. Marquez Callaway led the team with 46 catches for 698 yards, with six touchdown grabs to boot. He was No. 46 in Yards per Target among all wide receivers. There were 93 players with a higher True Catch Rate than Callaway’s 78.0-percent. Getting Michael Thomas back healthy and happy would provide a boost, but when was the last time he was both?

The cap squeeze is also likely to hurt the defense. Dennis Allen earned the right to succeed Payton largely on the back of his defense, which finished No. 7 in yards allowed in 2021. The numbers would have been better had it not been for finishing No. 14 in passing yards allowed. This is after posting the fifth-best numbers the year before.

Now, with the cold hand of regression on the team’s shoulder, Allen faces the prospect of the team struggling to re-sign P.J. Williams. He was tied for the team lead with three interceptions. Marcus Williams was third on the team with 74 combined tackles. He also chipped in with two picks of his own. He is just 26 and will be looking to cash in as he hits free agency. Can the Saints justify locking him up long-term with so many other pressing needs on the roster and so little room for manoeuver?

New Orleans has been artistically exceptional with how they have managed their cap in the past. Seeing them become not only salary cap compliant but also competitive in 2022, will be something to behold.

Sitting in a pew in a Chicago Church, police officer John Malone thrust his hand out towards Treasury Agent Eliot Ness, who shook it with a steely determination.

“Tell me Mr. Ness” Malone then asked, “do you know what a blood oath is?”

When Ness replied that he did, Malone shot him a serious look.

“Good. Because you just took one.”

Ness and Malone were hunting Al Capone. The Green Bay Packers are hunting another Vince Lombardi Trophy. But while the Packers pledge to do whatever is necessary to land their prize, someone within the organization needs to sit Aaron Rodgers down and ask him if he knows what a rebuild is. Because despite saying he has no intention of playing through one, Rodgers will be doing precisely that by remaining with the Packers.

Green Bay has been in desperate need of a secondary weapon in their passing for quite some time. Sure, having Davante Adams as your leading wide receiver is a situation that most teams would kill for. Adams led the Packers with 169 targets, 123 receptions, and 1,553 receiving yards in 2021. He scored 11 touchdowns to boot. He was No. 2 in receptions and No. 3 in yards among all wide receivers.

The next closest player on the Packers in terms of targets was Aaron Jones, with 65. Jones was also second with 52 receptions. Allen Lazard had 513 receiving yards. So you could so Adams is pretty vital to the Packers. Well, he’s a free agent and should be looking for a contract that pays him roughly $25 million a year. So can the Packers seriously lock him up while at the same time bolstering the weapons around him? Al Capone might have been capable of such financial chicanery. But even he ended up paying the piper.

It’s not just Adams that is set to hit the market either. Lazard is a restricted free agent, so he’ll probably be back in 2022. But Marquez Valdes-Scantling is set for unrestricted free agency. MVS was No. 1 among all wide receivers with a 17.5 Average Target Distance and finished with a 16.5 (No. 5) Yards per Reception average. But a 47.3-percent (No. 113) Catch Rate might prevent him from hitting the free agent jackpot. But even if he could be persuaded to return to Green Bay, how is he making the team better?

The offense will need to get better by investing pennies where dollars are needed. But what of the defense? Jaire Alexander is set to play the 2022 season on his fifth-year option. Alexander profiled as an elite prospect coming into the NFL and has played like one throughout his career. He endured an injury-ravaged 2021 season, but in 2020 he was an elite cornerback in the league. He led the way with 18 pass breakups and allowed a mere 53.6-percent Catch Rate. Alexander will want to get paid, and justifiably so.

Rashan Gary is another player who will start asking the team about an extension after a breakout 2021 campaign. He smashed his previous career highs in sacks, tackles for loss, and quarterback hits. He also finished No. 3 among defensive linemen with 39 quarterback pressures. When is his payday coming?

I do not doubt that the Packers will be cap-compliant by the time the new league year begins. But what kind of team will they be able to put out? Hard conversations are going to have to take place with some high-earning players on the roster. But if Aaron Rodgers thinks this team is not rebuilding, he’s deluding himself. The Packers could be taking a knife into a gunfight in 2022.

You must have been asked that hypothetical question during your fandom. You know the one. Would you rather your team was a competitive one year after year but never won a Super Bowl? Or win a Super Bowl then fade into irrelevance for, let’s say 10 years? Tampa Bay Buccaneers fans who were asked that question two years ago maybe about to start seeing what happens when you choose the second option.

The Bucs are not, at the time of writing, projected to be over the 2022 salary cap. They have $89,747 of effective cap space, with 52 players under contract for the 2022 season. The problem is, that 52 does not include several top players who have made the Bucs success over the last two seasons happen. It does include Tom Brady‘s projected $20,270,588 cap hit. A bargain, considering at his advanced age Brady led the NFL in passing attempts, passing yards, and passing touchdowns a year ago. But a fat lot of good that it will do the team if Brady makes good on his retirement from the game.

Chris Godwin is heading to free agency after 3,276 receiving yards over the last three seasons, No. 8 among all wide receivers in that span. Godwin has drawn more targets from Brady over the last two seasons than any other player except Mike Evans (212 to 216). Brady averages 9.68 Adjusted Yards Per Attempt when looking for Godwin, who finished with 1,103 (No. 13) receiving yards. All amassed in just 14 games. He also logged 589 (No. 3) Yards After Catch. A little less than 90 grand in cap space is not going to secure him, even coming on ACL injury. 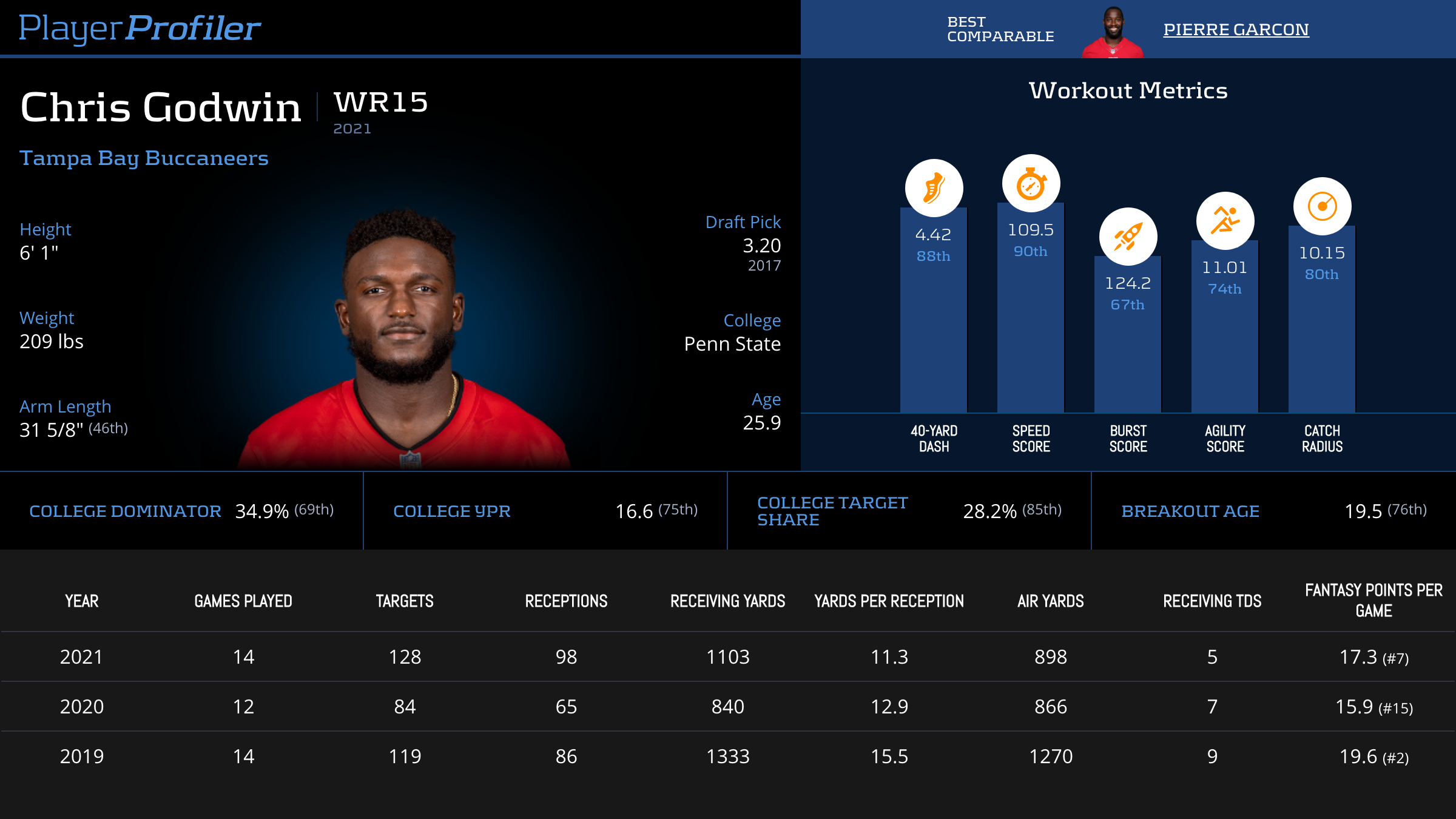 Rob Gronkowski, one of the greatest tight ends in NFL history, is a free agent. He could continue his career in 2022. But could you seriously see him catching passes from any other quarterback than Tom Brady? Ronald Jones, and more importantly Leonard Fournette, are also set to hit the open market. Fournette was a true workhorse in 2021, finishing with 239.9 (No. 7) Weighted Opportunites and 19.4 (No. 5) Expected Points Added. He has resurrected his career in his two seasons with the Buccaneers. But he will still want to be paid in line with his return to relevancy.

Ryan Jensen, the team’s Pro Bowl center, is also a free agent. He’s been a picture of durability and consistency throughout his four-year stint with the team. He’s going to command a hefty deal, especially considering how much Corey Linsley drew as a free agent in 2021. Carlton Davis recorded 13 (No. 10) Pass Break-Ups, and leads the league with 48 over the last three seasons. Teams across the league would pay through the nose to land that type of production.

Then are players like Jason Pierre-Paul and Jordan Whitehead, players who maybe won’t command top-tier salaries on the open market, but players who have been key to Tampa’s success over the last two seasons. You can’t pay everyone, that’s the truth of the salary cap system. But can the Buccaneers pay anyone and remain competitive next season? Even if Tom Brady goes back on his retirement and returns, how do the Bucs keep all his toys around for another season?

Smarter people than me are paid a lot of money to make these decisions. While you would hope they have a plan, and probably hope they can execute the moves they need to keep their players around and still improve their roster, remember the words of the great Andrew Brandt. Hope is not a plan.