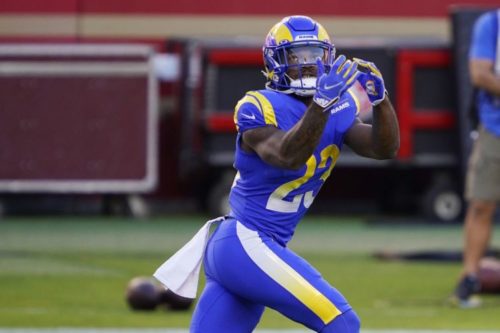 November football is nearing its end, and with 12 weeks of NFL football in the books, it is time to start thinking fantasy playoffs. Week 12 did not surface too many exciting options on the waiver wire, making this the perfect time to stash some playoff upside. PlayerProfiler’s advanced stats and metrics can help us look ahead rather than always chasing last week’s touchdowns.

The will they-won’t they relationship between the Rams coaching staff and Cam Akers‘ starting role has been the talk of the town for weeks. Akers’ Week 12 efficiency (9-84-1) dwarfed Darrell Henderson‘s 19 yards on three carries and Malcolm Brown’s 19 scrimmage yards on five total touches.

Project forward. Pray that McVay read the box score and plays his young stud as a workhorse in Week 13 against the Cardinals.

Ito Smith outproduced Brian Hill where it mattered in Week 12 against the Raiders. Hill rushed for 55 yards on 13 carries and drew one target. Smith went 12-65-1 on the ground and saw four targets. He is the higher upside play moving forward if Todd Gurley continues to miss time.

Jordan Wilkins was game-scripted out of this one early with Derrick Henry making light work of the Colts defense. He remains the go-to early down grinder if Jonathan Taylor remains on the bench. Nyheim Hines still presents the higher upside of the duo, but Wilkins is a touchdown dependent starter for teams with little options elsewhere.

Frank Gore‘s continued heavy usage is the perfect visualization of Adam Gase’s inability to call creative plays. Gore will continue to see 15-18 touches a game and fantasy players can use him in the Flex. If one of these 18 touches ends past the goal line, he’ll be an instant RB2 on the week. His Week 13 matchup against the Raiders has some potential for a run friendly Game Script, otherwise the fantasy playoff schedule is brutal for the run.

DeAndre Washington led the Dolphins in touches in an ugly Week 12 victory over the Jets.

not sure myles gaskin or salvon ahmed have the gravitas to simply push aside a guy with such an impressive all-around skillset. pic.twitter.com/CjjjhVhhq8

Washington’s upside remains low once Myles Gaskin returns to the lineup, but if he gets the start in Week 13, then there is hope. This is a long shot.

With high playoff upside, Tim Patrick remains a featured add in this column for two weeks straight. His schedule includes a potential Week 13 shootout with the Chiefs, Carolina’s soft secondary in Week 14, and another potential shootout in Week 16 against the Chargers.

not that it mattered lol.

Patrick is a featured weapon with high upside when Drew Lock returns to the lineup.

T.Y. Hilton is more available than most would think. He seems to have reclaimed his role as the primary receiving threat for Indianapolis. Temper expectations. Philip Rivers has been spreading the ball around, and the Game Script in Week 12 was ideal for increased pass attempts.

Keke Coutee is the apparent next man up in Houston after Will Fuller‘s season came to an end due to a PED violation. The depth chart currently features Coutee, Brandin Cooks, and Isaiah Coulter. Kenny Stills was recently released but could be re-signed.

Coutee may have some playoff upside, but we wouldn’t recommend staking your Week 13 on him. There’s a high chance this offense is simply less potent overall with Fuller on the bench.

Hunter Renfrow continues to see a high Target Share with a pass-heavy Raiders offense. This team is competing for a Wild Card spot and will continue to look for victories. The team as a whole has proven inconsistent, but on a good week, Renfrow can cash in a big game or two down the stretch.

With the Raiders, Seahawks, Rams, and Browns on deck, the rest of season fantasy schedule for the Jets is tough. The upside for Denzel Mims is the negative Game Script the team will face, resulting in extra passing.

The downside is that Adam Gase is still calling the shots. Still, Mims has eight targets in two of the last three games, and for a team facing an 0-16 season, it would make sense to deploy your young rookie. Now let’s hope the Jets do something right.

No. 5b) Breshad Perriman, Jets

We prefer Mims because Adam Gase has a poor history of getting the most from his deep threats. However, in theory, Perriman does have the higher upside with big play potential. Starting either means you’re desperate, or in a deep league with extra starters at Flex.

Andy Isabella is a long shot stash for the playoffs. If you are down to your last options, consider Isabella for his big play upside after seeing six targets with Larry Fitzgerald on the bench.

In Week 13, it is possible Jalen Ramsey‘s projected coverage on DeAndre Hopkins forces some extra big play targets to Isabella, although unlikely. Week 14 against the Giants presents a matchup with a soft secondary that is prone to giving up big plays, as does a Week 15 contest against the Eagles.