Welcome to Conference Championship Sunday in the NFL! Last weekend, we were all treated to perhaps the greatest weekend of playoff football ever, with three games won by last-second field goals, and the fourth, final game decided in epic fashion with a touchdown in overtime. Today, we’ll look at the AFC championship matchup between the Kansas City Chiefs and the Cincinnati Bengals, a rematch from Week 17 where Cincinnati scored in the last moments of the game and won 34-31. A key result of that victory, the Bengals won their first division title since 2009. Let’s take a closer look at both of these offenses, starting with the home team, the Chiefs!

Patrick Mahomes, now in his fourth year in the league, has separated himself from the pack as a top 10 quarterback of all time, and is slowly making the case to be called the greatest of all time. His play on the field has reached an elite level few have ever reached.

Can anyone stop Mahomes or will he make it to his third-straight Super Bowl?🔥 pic.twitter.com/BdMtp2AjF9

Consider this: In the two playoff games he’s played this year, he has thrown eight passing touchdowns. The remaining three quarterbacks, in the two games they’ve played, have thrown a combined six passing touchdowns. Sit back and watch him command this Chiefs offense on Sunday and witness his excellence at work.

In last week’s matchup column, I predicted the chiefs could use more Jerick McKinnon at running back, and they did! McKinnon had a 70.3-percent Snap Share and a jarring 31 (!) routes run. Clyde Edwards-Helaire only had 12 routes run. This backfield has opportunity bursting at the seams, but it has the look of a three-way committee with McKinnon leading the way, Darrell Williams handling short yardage situations, and CEH taking the leftovers. Edwards-Helaire, the former first-round pick, is slowly falling behind the two veterans.

A Chip Off the Old Block

This offseason, many expected Mecole Hardman to take the next step in his career and become an even more reliable option behind Tyreek Hill and Travis Kelce; however, Byron Pringle slowly carved out a place in this offense, running more routes, having a higher Snap Share, and even having more receptions last week against Buffalo. 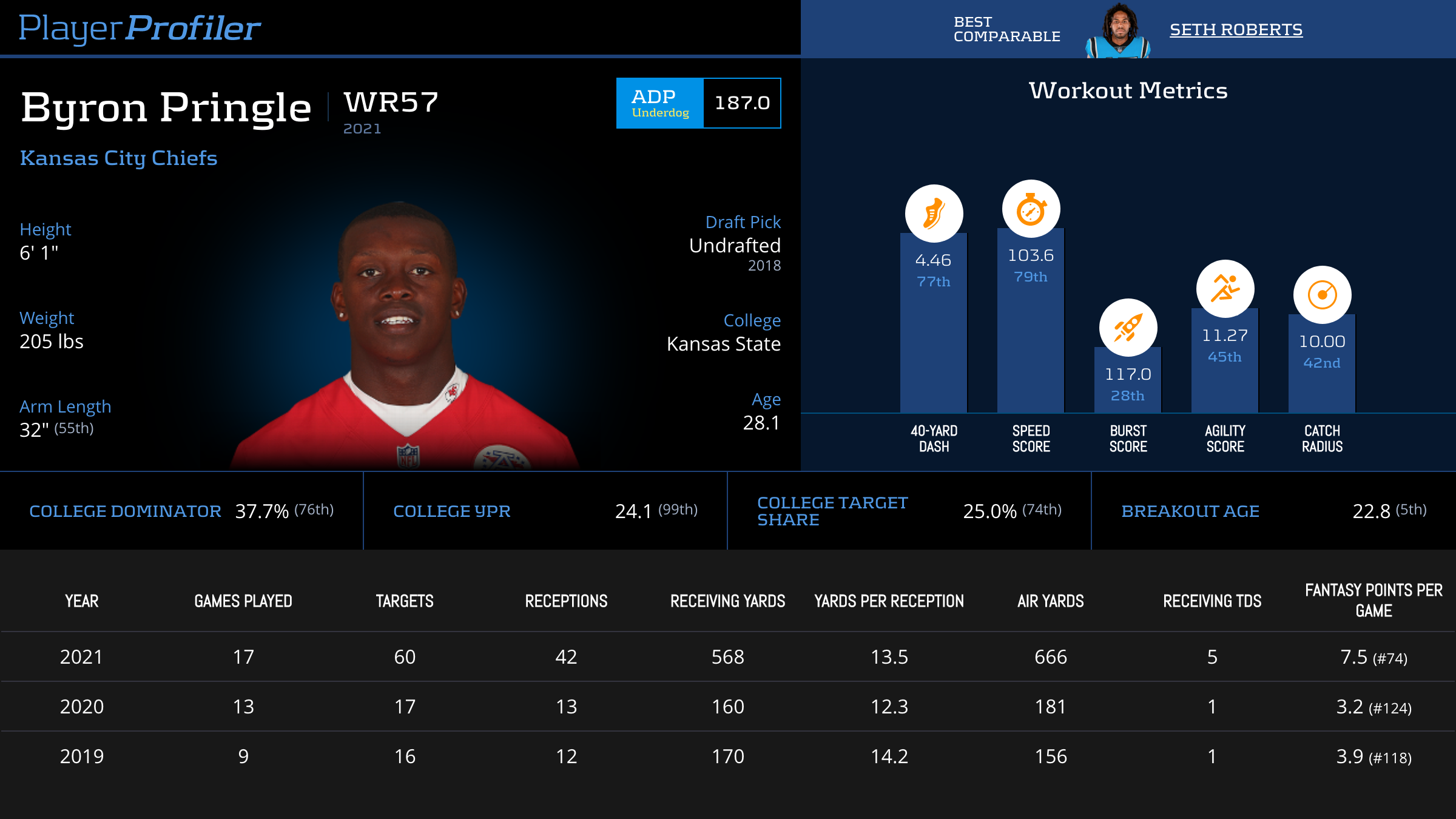 Mecole Hardman‘s 4.33 (98th-percentile among qualified running backs) 40-Yard Dash stands out above all of his metrics. And the blazing speed was on display on his 26-yard touchdown pass last week. But the steadiness of Pringle has been something Hardman needs in order to take the next step in his game. Of course, the passing offense flows through Tyreek Hill and Travis Kelce. So between these two receivers, not much will be asked of them. But we saw against Buffalo that they can make a splash play when their number is called.

Chase is On the Case

Ja’Marr Chase was arguably the most anticipated wide receiver to come out of the NFL Draft in 2021. And he followed through with a phenomenal season, even breaking the Bengals team record for receiving yards in a season. One of my favorite Chase stats that I discovered is that he averaged 21.2 (97th-percentile) College Yards Per Reception. Pretty incredible considering his competition was against SEC defensive backs. His current teammate, Tee Higgins, averaged a stunning 19.8 (93rd-percentile) College YPR. One would think that surely, with such an outrageous number in college, the number would regress once Chase made the jump to the NFL, right? He finished the year averaging 18.0 (No. 2) Yards per Reception, and was only 0.2 yards behind NFL leader Deebo Samuel.

This is overly simplifying it, but KC/CIN in Week 17 came down to 3 Ja’Marr Chase catches

* 69-yarder thanks to Sorensen’s spread-shaving angle

* 3rd & 27 conversion where KC sent the house… despite all four sacks occurring on 4-man rushes https://t.co/cRyeY31UI8

Chase is a star in this league, and after only 20 games, we’re seeing an elite talent that has the ability to take over the rest of the league. Oh, he also broke one other NFL record this season. He had 266 total receiving yards in a game against, of all teams, the Chiefs. Now, onto the guy that’s been delivering the ball to him since they were college teammates.

A Warm Cup of Joe

Joe Burrow’s rookie season was cut short by a torn ACL during a Week 11 matchup against the Washington Football Team. But after an aggressive rehab over the offseason, he was able to start the season in Week 1. And he has continually improved through the year. He is playing smart and safe with the football, all while simultaneously running for his life. Last week, he was sacked an NFL playoff record nine times against the Titans, who aren’t exactly the most imposing defense. Burrow will have to play even smarter and faster against an opportunistic Chief’s defense, who can take advantage of weaknesses if the offense does not account for them.

Not Just Another Joe Blow

The Bengals also find relief by handing the ball off to standout running back Joe Mixon, who finished the NFL season as the third leading rusher with 1,205 total rushing yards. And most impressively, he has an 87.5-percent (No. 5) Catch Rate. Mixon has proven that when healthy, he can produce and be highly efficient with his touches, which is reflected by his 770 (No. 8) Yards Created. He had a big play for a touchdown last week, and considering how often Burrow was hit last week, he could receive more carries as a way to protect him from continually getting crushed by the opposing defense.

The last time these two teams played, we got to see an incredible performance. Both scored over 30 points and Ja’Marr Chase broke the record for most receiving yards in an NFL game. Now they meet again, but this time the game is in Kansas City. There’s plenty to love about the upstart Bengals. Once a young team with plenty of promise, they have given life to a franchise that had embodied mediocrity. Now they are four quarters away from the Super Bowl. I expect the Bengals to come out playing fast and pushing the tempo on offense; unfortunately for them, the offensive line may have trouble keeping the pace with its skill positions. Kansas City wins 35-27.