As the season continues, less emphasis will be put on last season and early season’s stats. Vegas trends will also be implemented to help predict the game flow. I’ll conclude the article with a Cliff Notes section and give the readers my prediction for the game.
Welcome to the newest edition of Monday Night Showdown.  I’ll be guiding you through the important aspects to watch in every Monday night matchup.

Without further ado, let’s what the Saints and Seahawks have in store for us this week.

Jameis Winston has performed well as the leader of the Saints’ offense, posting 12 (No. 10 among qualified quarterbacks) Touchdowns and 0.75 (No. 1) Fantasy Points Per Dropback. Despite this, his fantasy season has been a roller coaster to start, with two games inside of the top 5 and the other three outside of the top 25. The floor is scary, but you’re rostering Jameis for his top-5 upside. He’s an auto-start in 2QB/Superflex leagues against a middle-of-the-pack Seahawks secondary.

A victim of weekly variance, Alvin Kamara has also struggled to maintain consistency. His performances are partitioned by being inside the top 10 and outside of the top 25. Kamara is still seeing elite opportunity, receiving 90.9 (No. 8) Weighted Opportunities and a 19.1-percent (No. 2) Target Share. You’re have no reason to sit Kamara, he will control the touches and feast against Seattle.

The Marquez Callaway breakout game finally happened. En route to a weekly WR11 performance, he racked up 4 receptions on 8 targets for 85 receiving yards and 2 touchdowns. He saw his highest Snap Share and route totals last week with the Saints seeming to figure out how to move the ball through the air. Against PlayerProfiler’s No. 112-ranked cornerback D.J. Reed, Callaway is a start in PPR leagues.

The deep threat Deonte Harris is really all the Saints have behind Callaway in the receiver room. He has the potential to score a deep touchdown, but even if he does, he’s still likely to finish as a low-end WR3. While he’s had an 8 target game, he faces a 28.3-percent (No. 130) Snap Share. He’s in no way reliable, but in bye-week hell he can be an emergency flex in PPR formats.

Geno Smith‘s first start this season was very meh. He managed the game well until he coughed up the ball in OT. Fantasy-wise, there’s nothing worth chasing here. The Seahawks will look to control the pace and run the football, they won’t have Smith “let loose” unless they have to. Plus, with the Saints front seven and Smith’s 70.0-percent Protection Rate, they’ll be in trouble if they get down early.

Alex Collins outplayed expectations with a workhorse role, earning 20 carries. The Seahawks are, as expected, running the football more now that Russell Wilson is injured. Despite a tough matchup, they’ll look to keep following this trend, making Collins a risky Flex play.

DeeJay Dallas possesses the one thing Collins doesn’t: receiving upside. Dallas saw 5 targets and turned them into 5 receptions. He was only given 4 carries, so his overall lack of usage is why he is a desperation play. 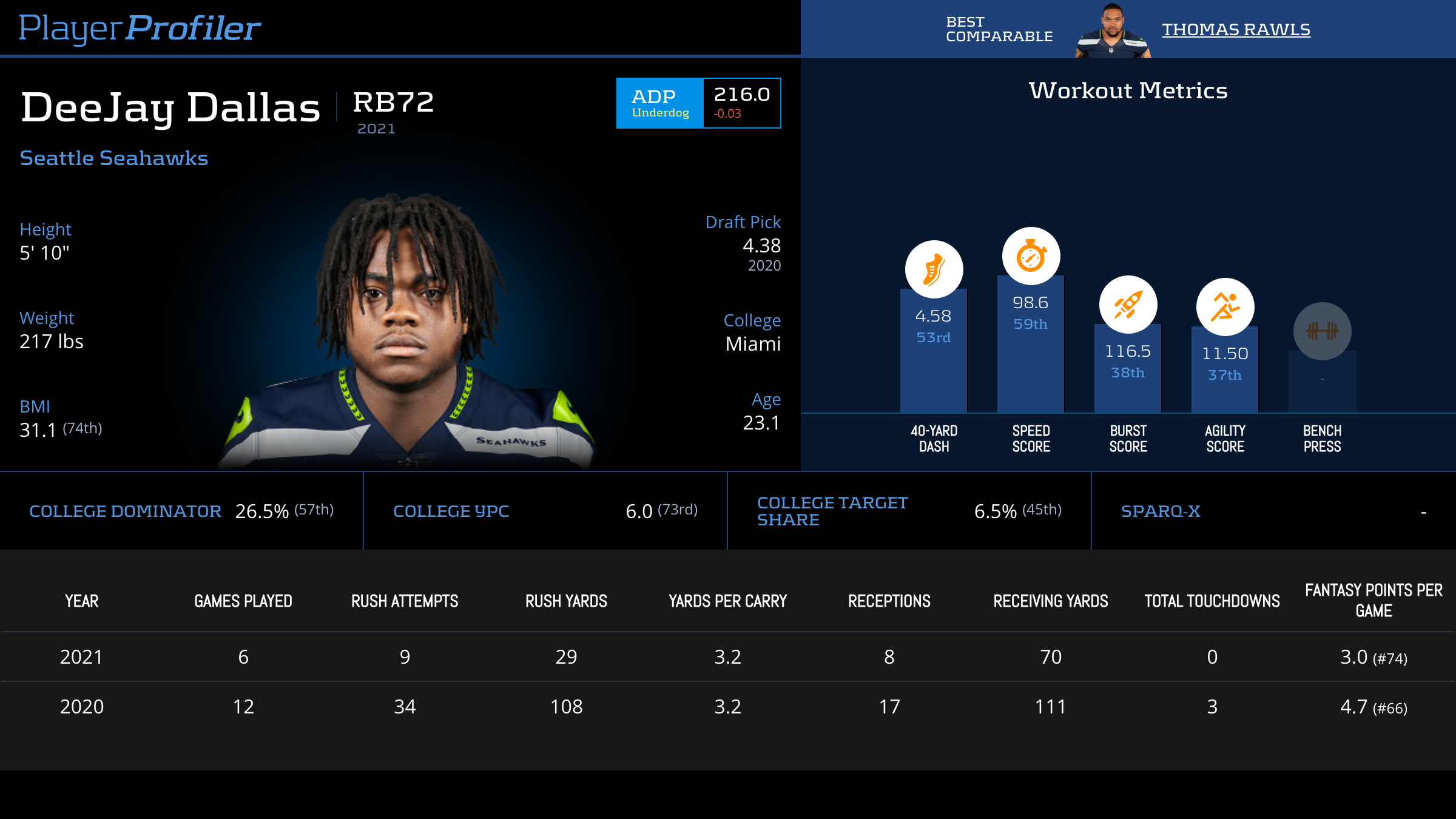 Tyler Lockett and Geno Smith weren’t on the same page on Sunday. Lockett converted only two of his seven targets. However, he ran a route on every one of Smith’s pass attempts, and totaled a 90.6-percent Snap Share. While his Air Yards will be much lower than normal, he’ll still be a target-hog and is worthy of a high-upside Flex play against No. 83-ranked CB Chauncey Gardner-Johnson.

D.K. Metcalf ‘s Snap Share is falling, but he paced the team in receiving yards for the fourth straight week. He has a seasonal 41.0-percent (No. 9) Air Yards Share and a 28.3-percent (No. 15) Target Rate. He also hasn’t produced less than 50 receiving yards in any game this season. He is a desperation play going up against Marshon Lattimore and his 32.8 Coverage Rating.

With Geno Smith at the helm, the outlook for the Seahawks is dreary. The offense moves at a sluggish pace, and has struggled to move the chains. The Saints have a fierce defense, and a dominant pass rush. I expect the Saints to control this game and cover the 4 point spread as favorites.

The Vegas total of 42 points feels low. The Seahawks and Steelers hit that total in OT last week. The Saints will have no problem scoring, and Smith will be more comfortable with a full game under his belt.

There is some concern about the weather. The outlook in Seattle is a dreary 55-degrees, with rain and wind gusts up to 15 mph. While this can slow play down, it shouldn’t be a downpour, and the wind isn’t overly abnormal. Play the over tonight, but expect a close finish.