Without further ado, let’s see what the Seattle Seahawks and the Washington Football Team have in store for us.

It’s tough to fly high with a broken wing. Since returning from his finger injury, Russell Wilson has been ice cold. He’s averaging 184 passing yards, 0 passing touchdowns, and 8 Fantasy Points Per Game. The good news for Russ is that Washington ranks No. 31 in Football Outsider’s Defense-adjusted Value Over Average, meaning the Seahawks offense has a massive edge. This is a picture-perfect rebound spot for “Mr. Unlimited”.

DeeJay Dallas is now the lead back by default in Seattle. Not only is he better than Travis Homer, he out-touched him 5 to 1 and ran 11 routes last week. He adds value to the team, posting a +5.1 (No. 23 of qualified running backs) Expected Points Added, and is reliable in the receiving game. Dallas is a deep flex play whenever he’s the lead back. 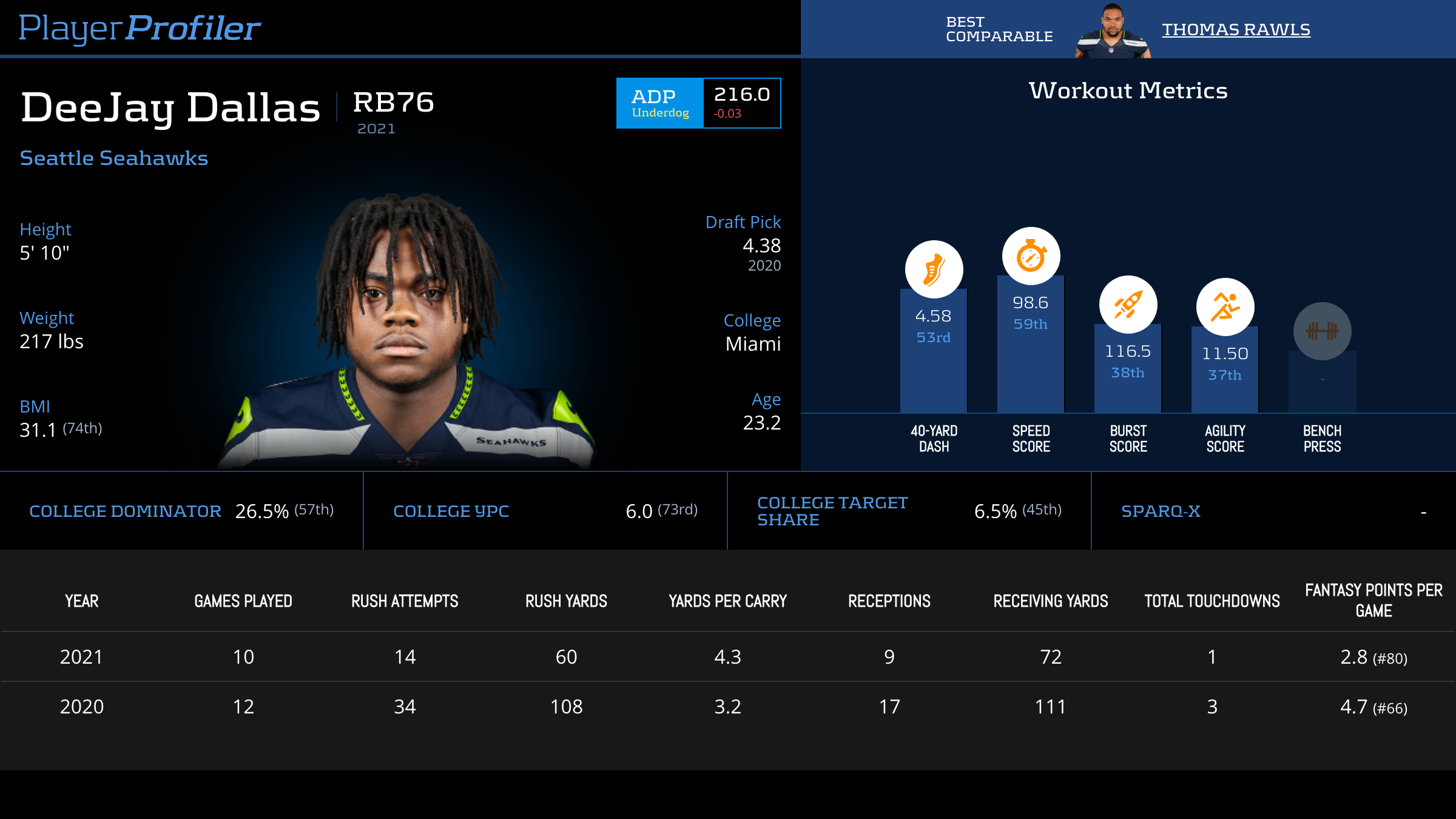 Whether you like it or not, Tyler Lockett is the number one receiver on this team. Last week he led the team with 115 receiving yards, and currently leads the Seahawks with a 99.3-percent (No. 2) Route Participation and 2.52 (No. 9) Yards per Route Run. The separator between him and D.K. Metcalf is touchdowns. Lockett out-scored Metcalf prior to Russell Wilson‘s injury, and I expect that to be the case from here on out.

That being said, D.K. Metcalf is no slouch. He currently sits at a disappointing 15.8 (No. 18) Fantasy Points per Game. You could blame some of it on Geno Smith, but Metcalf performed rather well during Smith’s stint as the starter. Regardless of who’s throwing the ball, Metcalf has been able to succeed. He’s racked up a 40.7 (No. 1) Dominator Rating, largely due to his 8 (No. 3) touchdowns. He’s is an every-week starter, especially with Russell Wilson healthy.

Taylor Heinicke had his redemption (and revenge) game on Sunday, finishing with 23.1 (No. 7) fantasy points. It’s been an up-and-down season, but he’s shown big play ability. He totals a 36.4-percent (No. 19) Deep Ball Completion Percentage on 44 (No. 10) Deep Ball Attempts. He’s an every week starter in 2QB formats and should be started again against a Seahawks defense that’s allowing 279.96 passing yards per game. 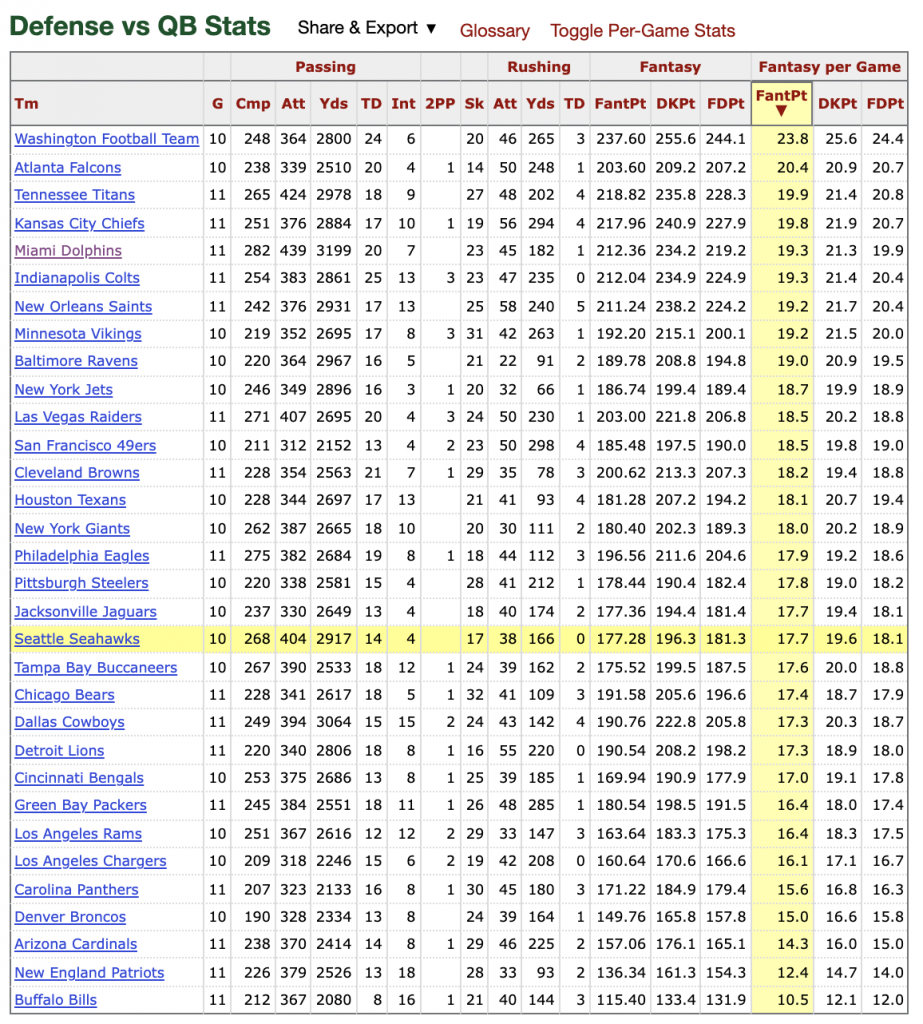 Antonio Gibson is healthy and has suppressed J.D. McKissic. He’s earned a 63.38-percent Opportunity Share  in the last two games. Despite battling through injuries, he’s compiled 128.5 (No. 16) Weighted Opportunities, 63 (No. 3) Evaded Tackles, and 431 (No. 15) Yards Created. If he’s healthy, he’s locked into your lineup.

Terry McLaurin‘s 15.9 (No. 17) Fantasy Points Per Game is below expectation. However, you can’t say he isn’t balling. He’s earned a 27.9-percent (No. 9) Target Share and 32.0-percent (No. 10) Dominator Rating. Still, he nearly leads the league with 587 (No. 2) Unrealized Air Yards. Taylor Heinicke is erratic and has struggled to connect with McLaurin at times. Scary Terry has massive upside lining up against 81st ranked cornerback Sidney Jones.

DeAndre Carter has come out of nowhere to be a viable fantasy option over the last few weeks. The bad news is that Curtis Samuel is back and thus Carter shall be relegated. Samuel is a deep flex play with decent upside coming off of another injury battle.

Speaking of Washington pass catchers returning to the lineup, Logan Thomas is also trending to play. He averaged 11.23 Fantasy Points Per Game prior to going on IR. It’s tough to tell how involved players will be, but if he’s a full go then he is a top 15 TE.

This game has an even point spread, meaning neither team is getting or giving points. Tonight’s pick has to be a straight-up winner. The public is favoring the Football Team at 58-percent of the money. Washington isn’t very good, and Seattle is better than a 3-7 team. The narrative is perfectly written for a Seattle victory, and that’s what I’ll be betting on today.

The point total is set at 46.5 points. Both team’s play at a slow pace, but have beatable defenses. They’ve both been finishing under the total lately, and the public expects this trend to continue with 70-percent of the money. Call me Bernie Sanders, because I am once again asking you to fade the public and take the over. I expect both offenses to take advantage of the defensive matchups and turn this game into a shootout.