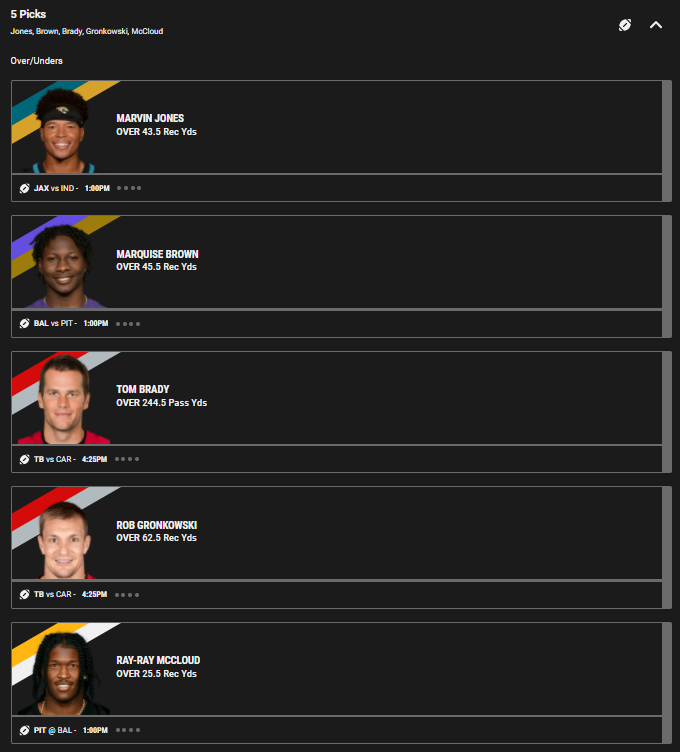 The Jaguars have nothing to lose, but Marvin Jones will lose $500,000 if he doesn’t bring in four receptions against the Colts. As a result, his volume will be safe in Jacksonville’s Week 18 pride match. Jones has reached 43 yards in five of his last seven games, so this modest line has a strong chance to hit the OVER. Also, he won’t have difficulty producing yards against PlayerProfiler’s CB64, Isaiah Rodgers.

So, you’re telling me there’s a chance?

Marquise Brown will continue to be heavily used in the Ravens passing game in Week 18 because Baltimore has a chance to make the playoffs if they beat Pittsburgh today. Brown has a 27.0-percent (No. 10 among qualified wide receivers) Target Share on 138 Targets and has hit at least 40 receiving yards in 12 out of 17 games this season. With their backs against the wall, the Ravens will lean on Hollywood and the passing game to keep their playoff dream alive.

Ray-Ray McCloud has been a target machine in the past few weeks. Since Week 14, he has averaged 7.25 targets per game and has hit 25 receiving yards in three out of four of these games. This is not surprising, considering he has averaged a 68.78-percent Snap Share since Week 14 on a team averaging 38.9 (No. 3) Team Pass Plays Per Game.

If the Buccaneers win against the Panthers and the 49ers beat the Rams, then the Buccaneers will have a home game in the second round of the playoffs. For that reason, I’m betting on Tom Brady to hit the OVER because he has only missed this line on five games this season. The Bucs will have enough scoring drives to support this line with an implied team total of 25.75 points. Also, Brady runs 43.4 (No. 1) Team Pass Plays Per Game, so if he was able to put up 253.6 passing yards per game with the ragtag 2019 Patriots wide receiver group, then he will do it with Mike Evans and Rob Gronkowski in a game with playoff implications.

It’s Gronk smash time in an important matchup against Carolina. The Buccaneers will lean heavily on Rob Gronkowsi because they are without Antonio Brown and Chris Godwin. Carolina’s defense yields a high percentage of it’s targets allowed to tight ends and Gronk will make the most of this opportunity with his 10.4 (No. 1 among qualified tight ends) Average Target Distance. Most importantly, he needs 85 receiving yards to earn a $500,000 incentive bonus. Cash out with Gronk.