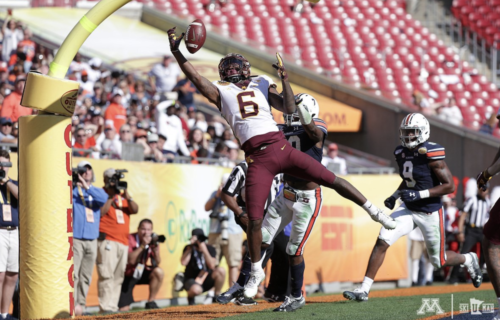 The due date for early entrants to declare for the 2020 NFL draft has passed. We now know the full pool of players available. It is officially prospect analysis time for dynasty owners. 2020 forecasts as a fruitful draft to own early rookie picks. A high number of skill position players project as early selections. If this prophecy holds true, then highly talented prospects will fall in rookie drafts in favor of players with lesser profiles but higher draft capital.

Daniel Jeremiah, NFL.com’s historically accurate mock drafter, recently released his 2020 NFL Mock Draft 1.0. He projected six wide receivers to go in the first round: CeeDee Lamb, Jerry Jeudy, Henry Ruggs, Tee Higgins, Justin Jefferson and Laviska Shenault. A quick review of some of the wide receivers that Jeremiah projects to be drafted after day one reveals the strength of this class.

Two of the main metrics used when analyzing wide receiver prospects are College Dominator Rating and Breakout Age. Prospects with high scores in both metrics are strong bets to become NFL studs. When these future target hogs fall in dynasty rookie drafts, they can turn into extreme values down the line, a la Tyler Boyd and JuJu Smith-Schuster. Two 2020 receivers that fit this profile are TCU’s Jalen Reagor and Minnesota’s Tyler Johnson.

Jalen Reagor left Texas Christian University early after an underwhelming junior season. However, he still displayed his smooth athleticism last year by compiling 384 yards and a touchdown on special teams. It’s safe to assume Reagor will be a Breakout Finder favorite in the dynamism category. In his sophomore season, which was his most impressive, he commanded a 32.6-percent Target Share for 72 receptions and 1,061 receiving yards. Plus, he rushed for an additional 170 yards and two touchdowns. This impressive 2018 led to his 18.7 (95th-percentile among qualified wide receivers) Breakout Age and 36.7-percent (73rd-percentile) College Dominator Rating. 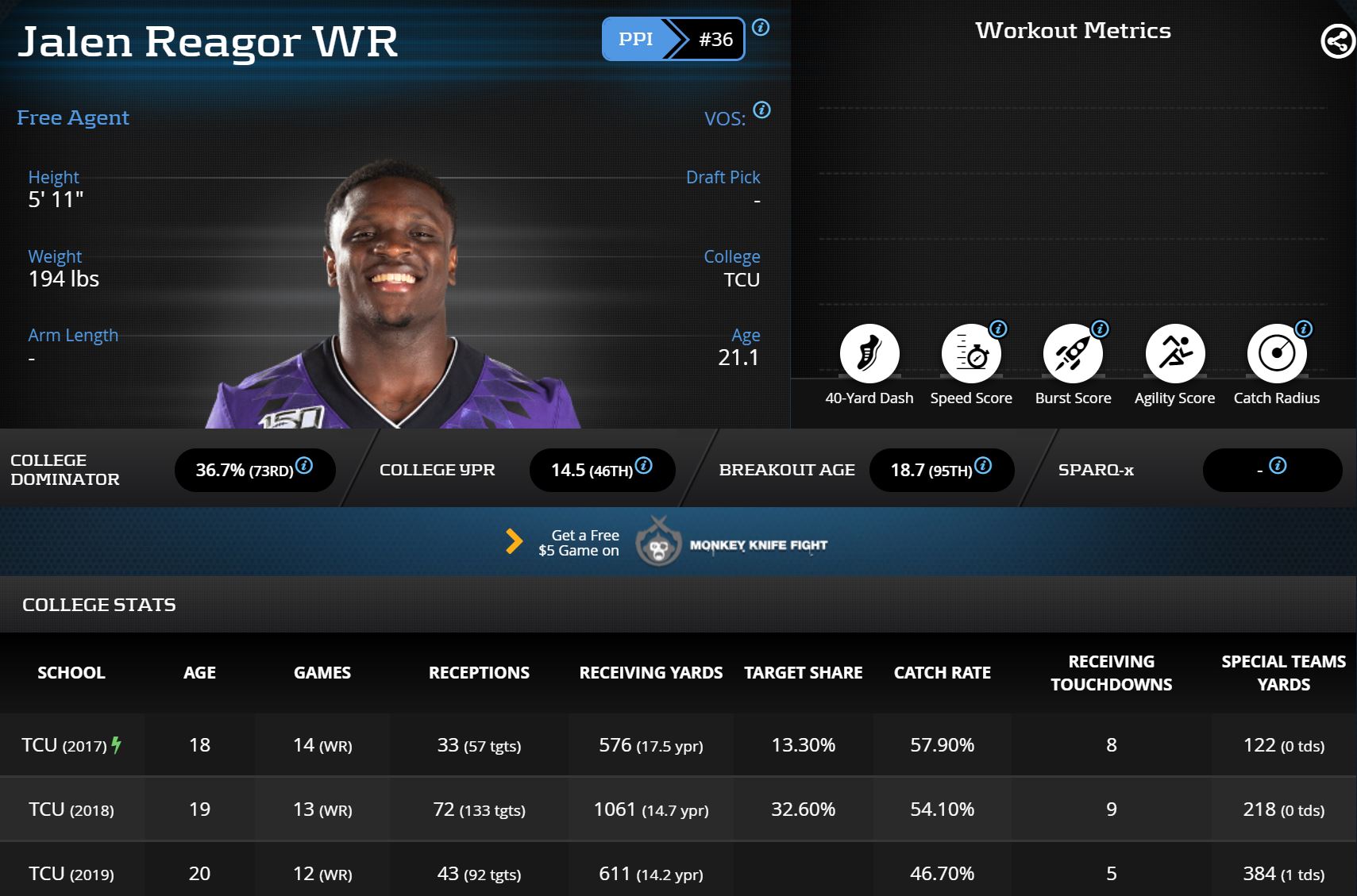 Reagor should also perform well at the NFL Combine and improve his draft stock. He is reportedly a beast in the weight room and should post a Speed Score that proves he can take the top off defenses at the next level. The NFL team that drafts him would be smart to use him like San Francisco used Deebo Samuel as a rookie this season. Sharp draft analysts like The Ringer’s Danny Kelly are already on the Reagor hype train. Kelly currently lists the Horned Frog alum as his No. 20 player on his Big Board. If Reagor has a D.K. Metcalf-like fall on NFL draft day, he may turn into the best value in 2020 dynasty rookie drafts.

Tyler Johnson surprised many analysts last offseason when he returned for his senior year. He already displayed his upside as a sophomore, posting a 19.0 (90th-percentile) Breakout Age and commanding a 29.2-percent Target Share, and it appeared unlikely he would benefit from another year in school. Johnson took his production to another level in 2018, catching 12 touchdowns on 78 receptions for 1,169 yards as a 20-year old junior. He returned for his senior season to become the first person in his family to earn a college degree and help the Golden Gophers make some noise in the world of college football. It is an understatement to say he accomplished his mission. 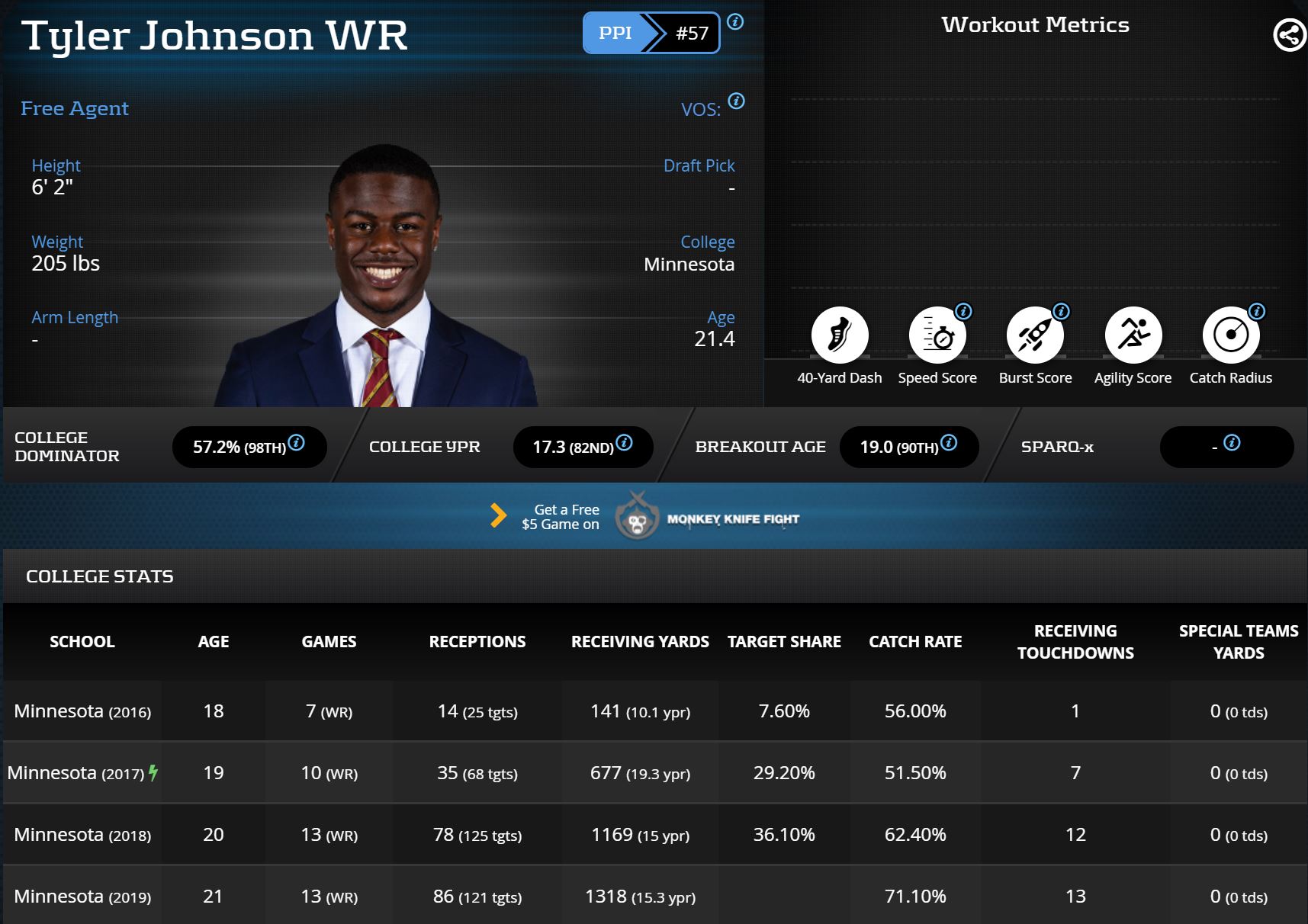 He increased his efficiency as a senior, recording eight more catches on four fewer targets than in 2018. Johnson averaged over 100 yards receiving and a touchdown per game with a 71.1-percent Catch Rate. Beyond individual stats, he helped Minnesota produce their first double-digit win season since 2003. He also answered questions about his ability to deliver in big games by leading the team to a 2020 Outback Bowl win against Auburn with 12 receptions, 204 receiving yards, two scores and MVP honors.

Despite incredible production evidenced by a 57.2-percent (98th-percentile) College Dominator Rating, Johnson has been overlooked by draft analysts. ESPN inexplicably lists him outside the Top-20 wide receivers and Top-140 players overall on their 2020 NFL Draft Best Available. It’s still early in the process, and Johnson will have an opportunity to improve his stock at the Combine. Covet him if he slips to the third round or later of the NFL draft and, in turn, the second round of dynasty rookie drafts.