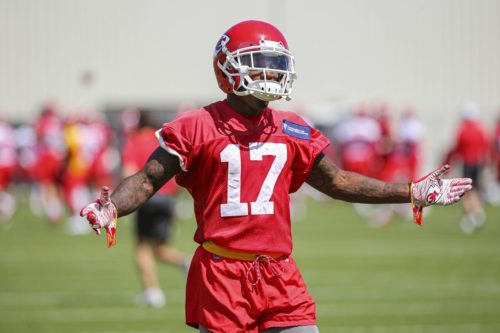 This is it. After the Kansas City Chiefs and San Francisco 49ers square off in Miami, we’re without NFL regular season football for over half a year. The next time there’s a proper Showdown slate, we’ll have a new XFL Champion, Cleveland Browns fans will have hope again and running backs still won’t matter. Who do the advanced stats and metrics like for the Super Bowl? Let’s get to it.

Patrick Mahomes ($16,000) will be the slate’s most popular play in the flex, and possibly in the MVP spot as well. More public money will be active on Sunday than in any other week of the season, and Mahomes has the most name value of any player on the slate. That doesn’t necessarily mean fade him, but be careful with using him as your MVP. Starting with an MVP that guarantees us to chop first place 50 ways if we win is not ideal. Consider locking him into lineups but looking for a less-owned MVP.

Travis Kelce ($12,500) and George Kittle ($11,500) are both great pivots. Both are concluding seasons that saw them lead their respective teams in targets, receptions and receiving yards. They’re both incredibly efficient in the face of league-leading volume.

Kelce and Kittle are the Spiderman pointing at Spiderman meme. In this case, one is more efficient while the other gets to catch balls from Mahomes.

If running Kittle at MVP, Jimmy Garoppolo ($14,000) in the flex is a near must-play. Kittle’s 26.5-percent Dominator Rating in the regular season was third among qualified tight ends. If he goes off, that means the 49ers’ passing game goes off. Garoppolo’s price tag makes him far too expensive to play in any scenario other than San Francisco hanging in a shootout with the Chiefs.

Four score and 220 yards ago, Raheem Mostert ($13,500) was a fine play but his ownership, coming off a historic performance, will be too high to get on board with. Before the Conference Championship, Mostert hadn’t topped 14 carries in five consecutive weeks.

Damien Williams ($14,000), on the other hand, is an actual bell-cow running back. Darwin Thompson ($6,000) has five carries and one catch over the past three weeks. LeSean McCoy ($6,000) has been on the field for a whopping one snap. Williams is a decent play being a 1.5-point favorite with a 27.75 team total. He still shouldn’t be taken over players such as Kelce or Kittle.

Tyreek Hill ($12,000) hasn’t seen double-digit targets or hit 100 yards in 12 weeks. He’s simply Kansas City’s second receiver to Kelce at this point but the public still sees him as a No. 1. He’s worth considering for an outright fade.

One way to get weird is to go heavy on 49ers and a George Kittle –Jimmy Garoppolo stack with either Emmanuel Sanders ($7,500) or Deebo Samuel ($8,500). The answer is Samuel, who has taken over as San Francisco’s second receiver. Sanders has scored more than nine Fanduel points once in his past ten games. Samuel has done that eight times in the same span. Based on his profile entering the league, this should surprise no one.

Kickers struggle to make the optimal lineup in shootouts because they don’t have access to touchdowns or splash plays. This game currently has a 54.5-point total, so fading both is on the table.

However, playing on 83.7-percent of the snaps in an offense led by Patrick Mahomes makes him worth considering.  A stack with Mahomes-Watkins-any Chief not named Travis Kelce or Tyreek Hill would be an interesting stack that banks on the fluky nature of touchdowns and lets us get up to Damien Williams/Raheem Mostert. Still, only play Watkins to be different, not because he’s good at football.

For Chiefs, the cheap options are Mecole Hardman ($6,000) and Demarcus Robinson ($6,500). Both are big-play threats tethered to Patrick Mahomes, but last week may have signaled a shift in their roles.

Glad to see Mecole Hardman get an expanded role Sunday.

* 40% of the snaps
* 21 routes, four more than Demarcus Robinson
* Snaps and routes most Wk 11#FreeMecole

Hardman is also a vastly more exciting player from an athleticism viewpoint. He ran a 4.33 (99th-percentile) 40-yard Dash and posted an 11.00 (75th-percentile) Agility Score at the Combine. How can anyone look at a miniature Tyreek Hill with signs pointing to a larger role and then opt for Robinson at $500 more?

No punt plays for the 49ers stick out as much as Hardman, but Kendrick Bourne ($7,000) would be the guy if they have a punt play that hits. To his credit, Bourne is more than a viable player for single-game formats when the 49ers’ opponent keeps it close. Because that happens so little, they don’t need the services of a third receiver often. Assuming the Chiefs do indeed play a tight game with San Francisco, Bourne is at least in play.