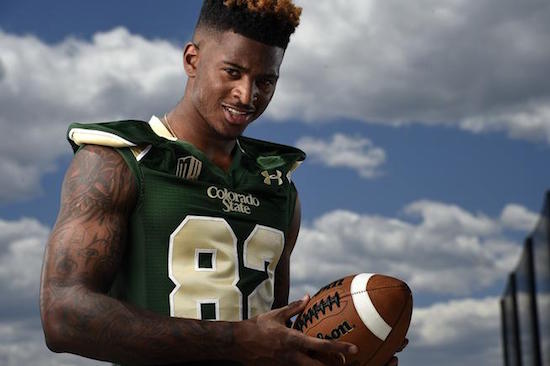 Rashard Higgins is an enigmatic fantasy prospect.  The good news is he can be gotten cheap, with a Dynasty League Football rookie draft  ADP of 3.01 as I write this, but some experts think he’ll be an NFL afterthought, not a fantasy difference maker.  With “Hollywood” Higgins the question becomes, what’s more important to you: breakout age and production metrics or physical comps?  His athletic measurables are catastrophic, but his College Dominator Rating and absurdly early start to that dominance lift him to the upper reaches of the 2016 RotoViz Phenom Index, where he ranks fourth.  Higgins is also a favorite of tape-watchers, scoring very highly in Matt Harmon’s Reception Perception and displaying route-running that reminds many of former Ram Isaac Bruce.  Will his skills translate to the NFL?  I believe so.

The Case Against Higgins

Rashard Higgins could not reach the 20th percentile in any of the PlayerProfiler‘s key wide receiver workout metrics.  Gulp.

Rashard Higgins‘ 84.6 (16th-percentile) Height-adjusted Speed Score (HaSS) and 112.4 (8th-percentile) Burst Score paint a vivid picture of a poor athlete.  It only gets worse from there.  Higgin’ 9.70 (6th-percentile) Catch Radius is tiny and his 11.66 (7th-percentile) Agility Score is abysmal.  It adds up to a 2nd percentile SPARQ-x Score (!).  With these athletic measurables Higgins may not have the baseline athleticism necessary to make it in the NFL.

Furthermore, Rashard Higgins‘ spider graph on Mock Draftable looks like a tiny, cocooned aphid!  I’ve never even heard of any of his comparable players.  Statistically, this matters.  If the average NFL athlete is greatly more athletic than any given player, this makes it unlikely that the player will come in and drag down the average.  If that happened often, the average would be lower.

If nothing else, NFL teams may degrade Rashard Higgins for his thin frame and slow 4.64 40-time and bump him down their draft boards.  The best predictor of NFL success is draft position.  For every bust like A.J. Jenkins (a first-round pick of the 49ers) there are a dozen first-and-second round picks from any given year who produce.  Pedigreed players get more patience and playing time.  Conversely, it’s incredibly easy to cut ties with a late-round pick or UDFA who isn’t an instant contributor.

I’ve heard Rashard Higgins compared to former Charger Vincent Brown, a very good college receiver who found himself out of the league after his marginal athleticism was further diminished by injury.  It’s possible that Higgins can get by on guile if all goes well but if he loses a drop of juice, he’ll have none left.

Even more important is level of competition.  Colorado State is in the Mountain West Conference, which bears little resemblance to the SEC when it comes to defenses.  The majority of the defense backs Rashard Higgins torched won’t be playing football on Sundays.  Then again, it’s not as though the offense around Higgins gave him an advantage, and his 2015 stats were notably depressed by losing his quarterback (Garrett Grayson) and his coach (Jim McElwain).

The Case for Rashard Higgins

Harvard Sports Analysis recently conducted a study finding that, for wide receivers, NFL Combine measurements aren’t a statistically significant predictor of success.  There are many ways to get open (craftiness, precise footwork, Anquan-Boldin-esque physicality) and receivers of all shapes and sizes have made it (or not made it) at the pro level. A lot more goes into winning at this position than athleticism.  Plenty of size-speed freaks have bombed, while the best receivers often face defensive backs that are far better athletes than they are and make them look silly.  So is Rashard Higgins that special?

Rashard Higgins‘ 18.9 Breakout Age 18.9 landed in the 91st-percentile.  Only 9-percent of his peers have had a better season at a younger age (or some combination thereof).  His 43.6-percent College Dominator Rating put him in the 85th-percentile, and his 16.2 college yards per reception were good for the 72nd-percentile.  Higgins was a mega-producer while operating as the focal point of his team’s offense, and he dominated predominantly older players.

Statistically, these are reliable indicators of Rashard Higgins‘ success — much more so than measurables.  Kevin Cole of Pro Football Focus created a model to find the most relevant college stats for receivers and found that a combination of younger draft age, higher career share of team receiving yards, more receiving touchdowns, and receiving efficiency (yards per reception) correctly predicted that a wide receiver prospect in the test set would be a success or failure about 81-percent of the time.

Cole is not bullish on Rashard Higgins’ prospects, due to his physical deficiencies and poor comparables, but according to his model, only five receivers from this class are more likely to post a top-24 fantasy season in their first three years.

Jon Moore’s RotoViz Phenom Index, which demonstrates the predictive value of age-adjusted production, also recognizes Rashard Higgins’ college accomplishments.  Higgins is one of four players in this class with a score over 2.47, which is the average score of the NFL’s top 12 receivers in 2015.  Moore’s metric favors precocious stat-stuffers over physical freaks, but most of the top scorers over the last three years are already household names or still promising.

And finally, Matt Harmon’s definitive study of receiver proficiency, Reception Perception, graded Rashard Higgins with the second best Success Rate vs. Coverage score against man defense, the third-best against press, and fifth against zone.  Harmon found that Higgins got separation on the full range of routes, at every level of the field, and did not rely on athleticism to do so even in the Mountain West.  Instead it is precise technique — including deception, hand-fighting and timing of leaps — that allows Higgins to win against more physically gifted players.  And whatever his limitations, Higgins does have the ability to stop on a dime or change direction without losing speed.  However, Harmon notes that those Mountain West defenses contributed to Higgins’ success.

Conclusion: Give Higgins a Shot

Draft position is probably the best predictor, so the jury is out for Rashard Higgins until his name is called. Some indicators say Higgins has no future, others say he’s likely to be a mid-range WR3 for at least a season or two.  For me the tiebreaker is the tape.  It doesn’t matter how he does it, this guy gets open and catches the ball.  His skills will translate to the NFL.  Higgins will certainly meet his match at times, but there are many defenders he can beat the same way he did in college.

When you get to the third round of your rookie draft, you’ll be looking at players like Rashard Higgins.  There will be significant question marks about all of these guys.  Do you believe Higgins will be enveloped by NFL defenses as he’s simply unable to compete, athletically?  Or do you believe that a versatile, technically masterful wide receiver can ply his trade against better athletes, especially if he isn’t matched up with elite corners?  Higgins doesn’t have to be Jerry Rice (or Isaac Bruce) to help your fantasy team.  I believe he’ll stick in the NFL and, in the right offense, become a reliable WR3 for stretches of his career.  How long those stretches will be is hard to say, at this point, but Hollywood should produce a lot more highlights than his poor workout metrics suggest.