Why would two scowling sports writers even consider conducting a genuinely upbeat, in-depth player evaluation?  Why risk a convergence of opinion when the television audience prefers contention?  Why would a sports analyst  risk offering real insight when he or she can stridently support a disingenuously polar opposite position with confirmation bias-driven data-mining, high level generalizations, and unfalsifiable coaching narratives?

This is all to preface: The Battle of The Michael Thomas.  Once per season, we will wade into the sports sewer, select two players to arbitrarily compare, and pick a winner.  Last season, Aaron Butler incorrectly picked Tevin Coleman over Devonta Freeman.  This year, we juxtapose two players solely based on birth certificate.  Now, let’s go and make Eric Rydholm proud!

Bad Michael Thomas possesses above-average production, below average YPR, above average agility, below average speed.  Though he stands 6-3, Thomas’ profile looks a lot like the typical NFL slot receiver.  BMT is now the same height and weight as Jordan Matthews coming out of Vanderbilt. However, Matthews was far more dominant and considerably faster.  Matthews has the profile of an outside receiver in the NFL, while Thomas profiles as a inside receiver at the next level.  Indeed, Bad Michael Thomas deserves the “pumped up slot receiver” label that the #FootballTwitter take-regurgitating drones incorrectly assigned to Jordan Matthews.

Why write things that make sense on Twitter.com when you can write things that don’t make sense?  While their 40-timers were identical, Dez Bryant showed great burst with limited lateral quickness.  Bad Michael Thomashas average burst paired with excellent size-adjusted agility (10.93 Agility Score is one of the best among 6-2 or taller WRs).  Measurables aside, here is how Dez Bryant and Bad Michael Thomas production compared:

Clearly, Matt Miller does not use PlayerProfiler.com.  Here are three WRs with similar workout metric proportions to Bad Michael Thomas. 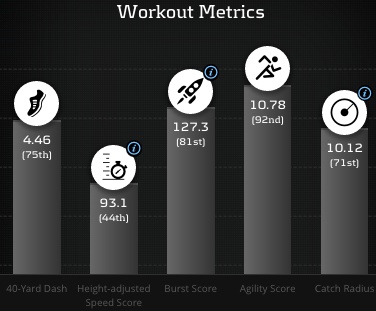 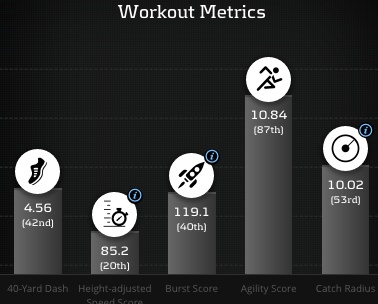 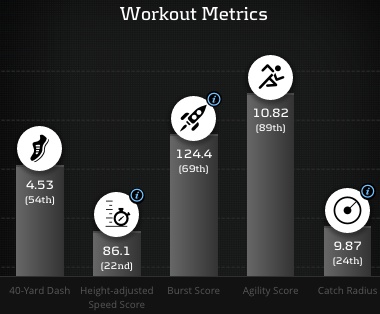 The wide receivers were Michael Campanaro (No. 1), Justin Hardy (No. 2), and Doug Baldwin (No. 3) — a who’s who of NFL slot receiver prototypes:

Taking the Eagles parallel further, while Bad Michael Thomas is the big slot WR prototype that was improperly assumed of Jordan Matthews, the Good Michael Thomas (GMT) also projects to be an inside receiver at the NFL level — a superior Nelson Agholor.

Working against Good Michael Thomas is the fact that he was not invited to the NFL Scouting Combine.  As Rotoworld‘s Rich Hribar noted on the Football Diehards Podcast, that fact alone implies that only a handful of NFL teams have been tracking Michael Thomas’ Southern Mississippi career with even a modicum of interest.  Given this, Thomas projects to be a day-3 pick, which will mute his year-1 snaps unless he miraculously finds himself on a talent-depleted WR depth chart due to injury or roster mismanagement.

Working in Good Michael Thomas‘ favor is his special teams prowess.  Thomas logged an incredible 600-plus return yards in his first year at Southern Mississippi.  Assuming he is selected in the back half of the draft, the special teams abilities should allow Good Michael Thomas to secure a spot on a 53-man roster at the conclusion of training camp and be available when called upon as the 2016 unfolds and incumbent players get hurt or underperform.

Alright Southern Miss Michael Thomas fans, what does he do better than OSU one?

Poor Buxton got this question backwards.  Bad Michael Thomas was the one invited to the NFL Scouting Combine, BMT is being compared to Dez Bryant (LOL), and BMT projected to be a day 1-2 pick in the NFL.  The onus is on Bad Michael Thomas to demonstrate a superior skill set to Good Michael Thomas, not vice versa.  By almost every measure, however, BMT looks like the lesser Michael Thomas. 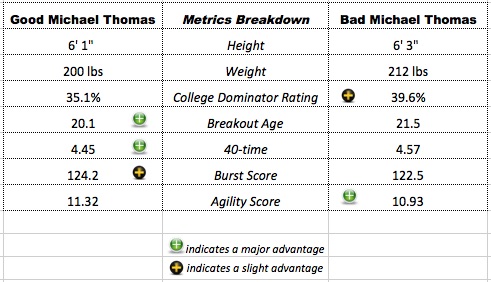