Few times in a season does a player emerge that’s truly worthy of a high priority pickup. The league-winning move may be one that doesn’t require any FAAB dollars to be spent. A key to winning consistently in fantasy football is using advanced stats and metrics to identify breakouts before they happen. Stashing these players before our opponents get the chance to is a winning strategy in any format. Of course, this is much easier said than done.

Nick Westbrook-Ikhine is our stash of the week in fantasy football.

When it comes to picking up, and sometimes starting, players that no one else in the fantasy community wants, pinpointing hits with any consistent success is inherently difficult. Entering any given week, these widely available players have enough obstacles to overcome on the path to consistent fantasy relevancy to keep the general public off of them. Still, this early in the season, there’s plenty of free meat to pick from the proverbial fantasy football bone.

A bet on volume is a shaky bet. But Nick Westbrook-Ikhine ran a route on 82-percent of Ryan Tannehill‘s dropbacks last week. Now, A.J. Brown and Julio Jones are out. For his part, Westbrook-Ikhine totaled four receptions on as many targets last week. He totaled a 4-53-1 receiving line. The Jets defense, meanwhile, rank in the bottom-half of Pass DVOA thus far. After the Jets this week, the second-year WR has the Jaguars on tap. That Jaguars defense rank third-to-last in Pass DVOA. I’d flex Westbrook-Ikhine in both contests. Brown and Jones are no bets to make it back for Week 5. Let’s stash the Titans No. 1 WR for the foreseeable future before the price goes up. 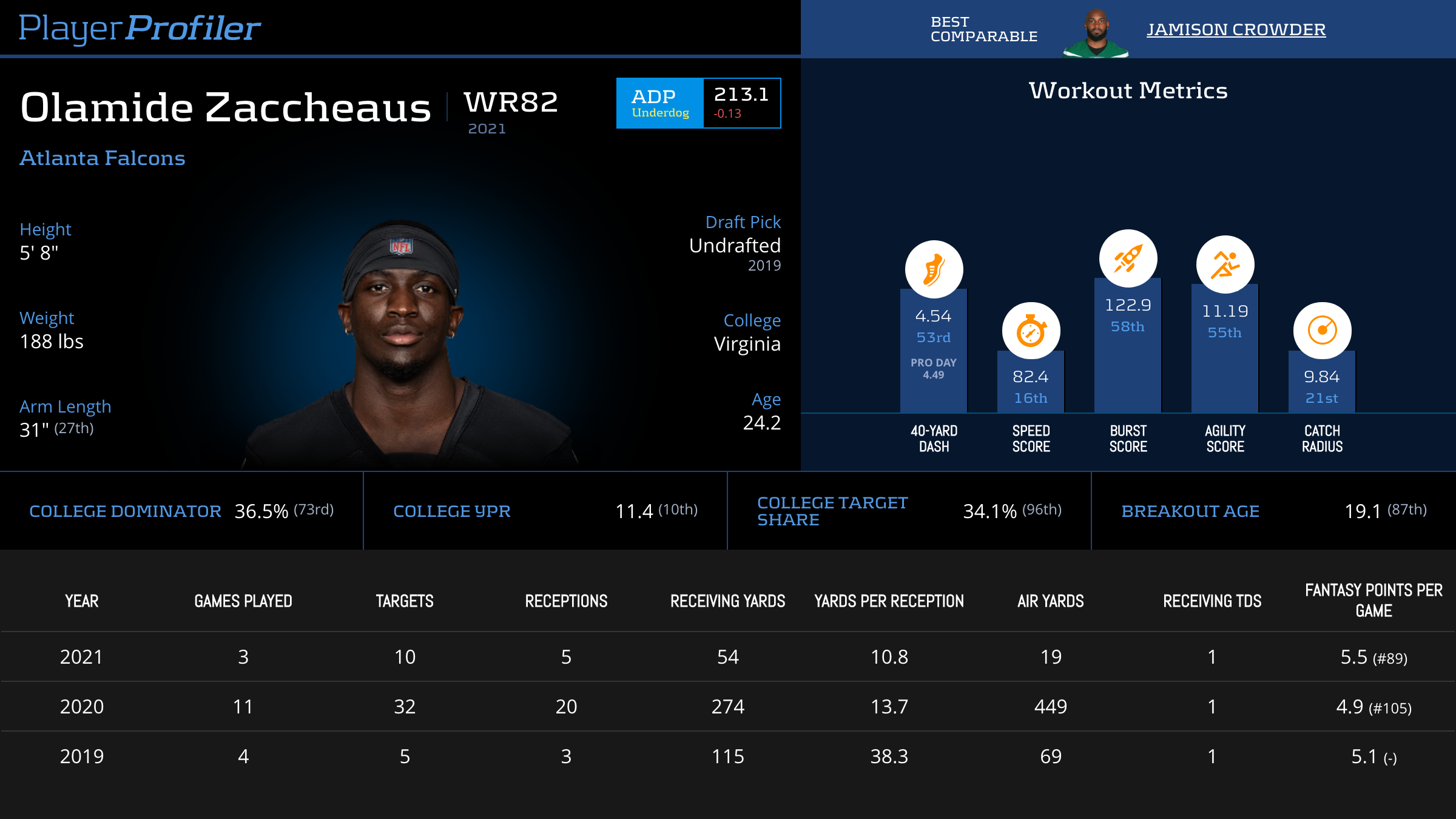 Last week, Zaccheaus totaled a 63.3-percent Snap Share in the absence of Russell Gage. The second-year WR ran 26 routes, earning six targets. He totaled a 3-32-1 receiving line. Well, Gage is out again this week! The Washington Football Team’s defense, meanwhile, have allowed four touchdowns to WRs in their first three games. The defense rank fourth-to-last in DVOA as well, including fifth-to-last in Pass DVOA. Helping Zaccheaus’ case more is the fact that the Football Team and Falcons rank No. 9 and 11, respectively, in situation-neutral pace. More overall play volume gives the second-year WR more opportunities. Let’s stash Zaccheaus and see if he earns permanent targets while Gage is out, this Falcons offense needs a spark!

Kadarius Toney totaled season-highs last week with Sterling Shepard and Darius Slayton leaving the game early. The rookie WR totaled a 67.7-percent Snap Share, leading to 29 routes run. Toney earned three targets, more than in his first two games combined, and parlayed the opportunity into a 2-16 receiving line. While that’s nothing that’ll get the group chat talking, he has a first-round pedigree. This week, he’ll audition himself for a bigger role. And if he sticks, he has a juicy matchup against the Cowboys next week.

After shutting down the Packers’ offense in Week 1, the Saints have allowed three touchdowns to WRs in their past two games. The downside for Toney is that he’s playing generally stout defense. The Saints rank No. 6 and No. 3, respectively, in Pass and Rush DVOA.

With James White out for the season, and with a full week of practice to prepare for his role, J.J. Taylor is a must-add. Brandon Bolden is not the move. Since Bolden’s three receptions last week are 33-percent of his total from last season, I’m going to go out on a limb and say he was used in that role because of an emergency. Taylor, meanwhile, fits the mold of a satellite back at 5-6, 185-pounds. The rookie RB’s routes run jumped from one in Week 2 to eight last week. Now, we’re betting on him running more this week with a full week to prepare and thus earning more targets. He totaled a 2-5 receiving line last week. 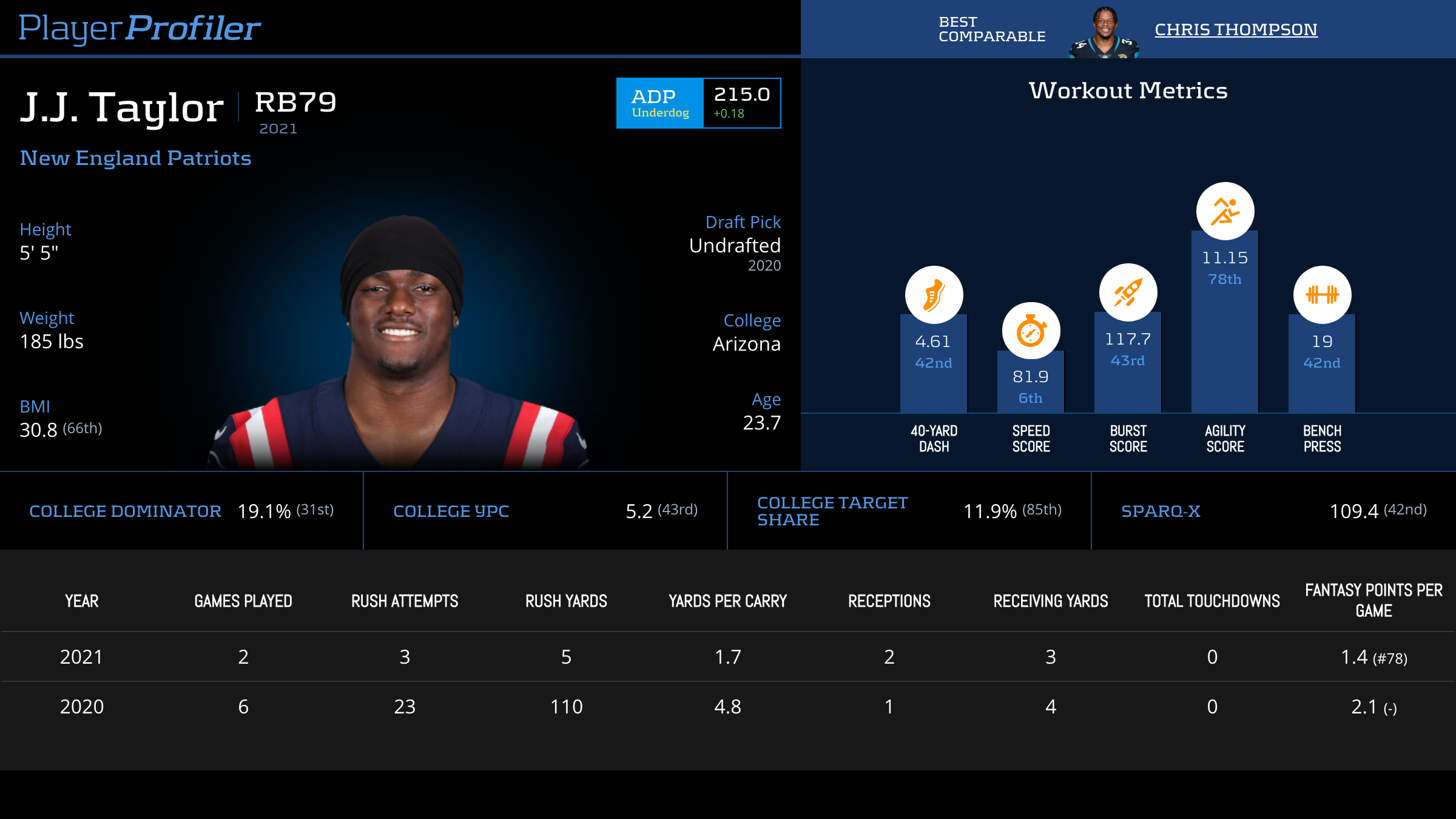 This week, the Patriots face off against the Buccaneers defense (have you heard?). Ranking No. 7 in Rush DVOA, the Patriots may be best suited for RB dump-offs to serve as an extension of the run game. In that case, he has aplenty opportunity. The Patriots and Buccaneers offense rank No. 5 and No. 12, respectively, in situation-neutral pace of place as well, while the implied point total sits at 50. Then, it’s wheels up next week for Taylor against the Texans.

Rhamondre Stevenson has a better draft pedigree than fellow rookie Taylor, but let’s not be scared off by a RB whose position coach said he had to work on everything less than two months ago. The same RB fumbled Week 1, then literally never suited up again. That’s a bet I’ll respectively let someone else make.

With Rob Gronkowski set to miss multiple weeks, O.J. Howard is the move to make if you’re attempting to snag the backup. Last season before Gronk became a thing, in his first four games before a season-ending injury, Howard simply was the guy. Though he was a part-time player based on Snap Share, Howard totaled 19 targets through four games. And he parlayed the opportunity into 11 receptions, 146 yards, and two touchdowns. This includes two top-8 weekly finishes as well. Based on these numbers and Gronk’s usage this season thus far, let’s get out in front of Howard popping and stash him now.

The downside is the Patriots aren’t a great matchup and that they shut down their former signal-caller Tom Brady.