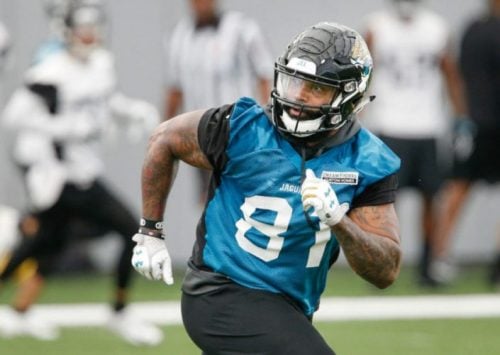 Week 5 was a good week when it comes to stashing players in fantasy football based on their advanced stats, metrics, and analytics profiles. Marquez Valdes-Scantling finished as the WR11 and is in line to once again see an expanded workload. The second time was the charm for Tre’Quan Smith, finishing as the WR5 with Ted Ginn sidelined. C.J. Uzomah only caught two passes for 43 yards, good for TE20 numbers, but established himself as Cincinnati’s every-down TE. Tyler Kroft being ruled out for this week increases the odds of Uzomah continuing to return value as a streamer. Alex Erickson continues to see more opportunity than Josh Malone, but both may be rendered irrelevant upon John Ross’ return.

The worst fears of fantasy gamers manifest when a player they cut bait on too early goes off. Knowing when to cut players from our fantasy football benches can often feel like an impossible task. While it makes sense to drop Josh Malone, he could easily become stash-worthy again if John Ross’ groin acts up. Alex Erickson may be the safer play in that instance since he’s received the usage in Ross’ absence. But stashing players is rarely about taking the safe route. It’s about taking gambles on players whose situations could vault them into fantasy relevancy. Even if you have to add them to your roster more than once in a season.

Like Tre’Quan Smith last week, Ito Smith makes his second appearance in the Tomorrow’s Newspaper series for 2018. Dropping Smith from fantasy rosters upon Devonta Freeman’s return made sense on the surface. But not when the injured starter has chronic lower body injuries that date back to last season. With Freeman out for Week 6 if not longer, Smith needs to be a priority stash heading into Sunday’s games.

The same reasons for recommending stashing Ito Smith in advance of Week 2 apply for this week too. Like Tevin Coleman, Smith recorded an upper-percentile College Dominator Rating and College Target Share at a Division I school. Like Coleman, he has the athleticism and college production profile to achieve standalone fantasy value in this Atlanta offense. We saw this in Week 5 when Smith found the endzone despite only playing 12 snaps and Freeman being active. If you owned and dropped him upon Freeman’s return, this is your second chance to not make that mistake again.

Chester Rogers is a player that represents the opposite approach to the one we try to take with our stashes. A relatively unexciting wide receiver tethered to Andrew Luck, he’s the definition of a safe player. But like many of the players discussed in this series, he’s taken advantage of an injury to a teammate. He’s seen 11 targets and eight catches in both games where T.Y. Hilton has been out or limited. With chest and hamstring injuries likely to keep Hilton out of a juicy match-up against the Jets, it’s once again wheels up for Rogers.

The 2018 efficiency numbers for Chester Rogers don’t paint the picture of an exciting player. But there are a few promising numbers to look at. One is his 96.9-percent (No. 3) Catchable Target Rate, which makes sense given his 6.7 (No. 93) Average Target Distance. Another is the league-leading 51.2 pass plays per game that the Colts average. The last one is his 10.92 (83rd-percentile) Agility Score. Now combine that with the fact that Ryan Grant is expected to be defended by Morris Claiborne and his No. 1 Coverage Rating on Player Profiler, while Rogers draws the coverage of the inferior Buster Skrine. It’s all enough to recommend Rogers as a deeper league dart-throw start.

It’s never comfortable to suggest stashing players on teams that have been as ravaged by injuries as the 49ers. With their top QB and RB gone for the year, it’s hard to expect them to move the ball consistently. But a receiver seeing increased opportunity on a team projected to be consistently playing from behind is hard to ignore. Especially when the top two players on the depth chart have been ineffective and/or in and out of the lineup with injuries. With Dante Pettis and Trent Taylor ruled out for Week 6, enter Richie James.

With one catch for seven yards on the season, Richie James won’t be on many fantasy radars. With a 22.8-percent (30th-percentile) College Dominator Rating and a 97.4 (26th-percentile) SPARQ-x score, he’s not the kind of player the Underworld faithful tend to gravitate towards. In this particular case, the team he plays for doesn’t matter as much as his projected Opportunity Share. With most of the projected opportunity coming from the slot, he has a chance to use his upper-percentile agility to make red zone plays should the team receive sufficient chances. Given the up-and-down nature of this team’s receiving group to this point in the year, he’s well worth the stash.

Entering Week 5, Marquez Valdes-Scantling was the only Green Bay rookie receiver to be listed in Player Profiler’s seasonal rankings. With both Randall Cobb and Geronimo Allison out, the chance for more than one of them to contribute increased. Equanimeous St. Brown received the nod over J’Mon Moore, catching three of his five targets for 89 yards. The status of both Cobb and Allison for Monday night is up in the air. Whether or not you own either, or Valdes-Scantling, St. Brown needs to be stashed.

With Equanimeous St. Brown expected to enter the starting lineup this week, Green Bay’s receiver configuration becomes more ideal. Marquez Valdes-Scantling and his 11.02 (72nd-percentile) Agility Score is a great fit in the slot. Davante Adams remains at flanker while St. Brown moves to split end. And a 6-5 split end with a 112.1 (94th-percentile) height-adjusted Speed Score tethered to Aaron Rodgers sounds like everything I want to be a part of. You know what to do.

It’s been a bad few weeks to be a  LRTE OG. First Tyler Eifert is lost for the season, and now Austin Seferian-Jenkins finds himself on IR. While he could return later in the year, someone will need to try and take advantage of a newfound starting role in an offense that trends towards being pass-happy until at Leonard Fournette returns. That someone is perennial Underworld favorite Niles Paul. He caught seven balls for 65 yards after ASJ went down, numbers that would’ve represented season highs for the injured starter. The odds that he steals ASJ’s job out from under him are greater than most fantasy gamers think.

Niles Paul represents the kind of tight end that has become a favorite of the Underworld. A converted receiver who has gradually put on weight and gained experience since switching positions. Though he saw extended playing time and success in 2014, 39 catches and 507 yards doesn’t necessarily constitute a breakout. What fantasy gamers forget is that he beat out Jordan Reed for Washington’s starting job in 2015 before a preseason ankle fracture ended his season. He has the look, he has the experience, he has the opportunity, but he doesn’t have the name brand recognition. He does have the ability to change that with a few usable fantasy outings.