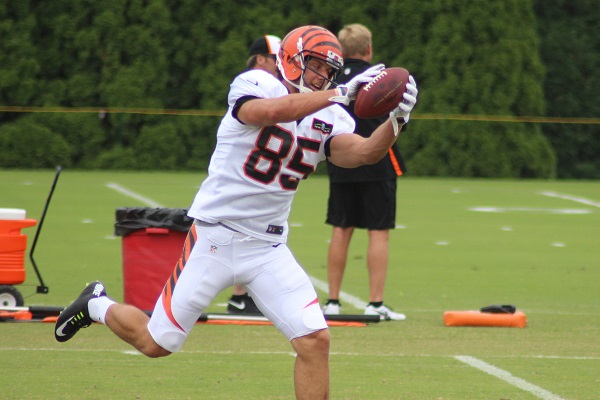 Tight end output is almost as volatile and difficult to forecast year-to-year as running back output. A lot of this has to do with a fragility rate that’s the highest among the fantasy skill positions, with tight ends missing 16.8-percent of their games due to injury. This adds further fuel to the speculation that Rob Gronkowski has an impossible ADP, and that betting on him to meet or exceeded the fantasy point output expectations of his 7.2 average draft position (ADP) in MyFantasyLeague.com (MFL) money leagues would be betting against a historical precedent.

Rotoworld.com‘s Evan Silva gave us permission in July to draft Gronk as high as we wish, but the fact that TEs drafted in Rounds 1-12 have endured a 44-percent draft capital-adjusted bust rate over the last two years should give you pause. If you decide to implement a Late Round Tight End tactic on draft day, a particular TE archetype has proven to be more durable and productive.

The best-value TEs in fantasy football are generally going to be the 6-5, 250-plus pounders that are going to play on every down or close to it.  The RotoUnderworld minions are excited about Travis Kelce’s 2015 outlook specifically because we anticipate him receiving a significantly higher snap share than the 73-percent he managed in 2014 while maintaining Gronk-like on-field efficiency. Fortunately, Kelce is still relatively cheap with an 48.4 ADP in MFL money leagues.  If Kelce is sniped by a fellow minion in the draft room, fantasy gamers need a viable alternative.

The stars are aligning for Tyler Eifert to become one of this year’s biggest value picks. Casual fantasy owners may discount him or write him off almost entirely because missed most of last season after dislocating his elbow in Week 1. In addition, some fantasy gamers seem to be down on the Bengals offense as a whole after they failed to meet the lofty expectations set for them in 2014, which should also help drive down Eifert’s price. Nevermind the fact that the starting offense resembled a scene from M.A.S.H. for a majority of the season.

With only 62 career targets, a look at Tyler Eifert’s intrinsic value is necessary. An 82nd-percentile college dominator rating combined and stellar workout metrics (none of which fall below the 71st-percentile) suggest a star in the making. His 2013 efficiency metrics weren’t great, but 1.) it was his rookie season and 2.) he was playing second fiddle to Jermaine Gresham. Despite that, Eifert recorded the higher Hog Rate (8.8 percent to 7.4 percent) despite receiving less targets, catching less balls and recording a lower snap share. With Gresham now in Arizona, Eifert should inherit the majority of his 94.2 percent snap share (seventh among TEs last season).

A tough schedule, projected to be the most difficult among TEs, is cause for pause. But, Tyler Eifert has the profile of a player who could overcome that challenge and still be able to generate enough fantasy points to exceed his current value and even possibly vault into fantasy TE1 territory as an every week starter.  If he doesn’t, he’s not a huge risk at his current MFL ADP of 128.7.

Austin Seferian-Jenkins has first round-caliber talent and was an elite producer in college as evidenced by his 87th-percentile college dominator rating of 29.5 at a BCS school. However, lingering concerns over a lengthy injury history knocked him down to the second round of the 2014 NFL Draft. Outside of his red zone catch rate and contested catch rate, none of ASJ’s rookie season efficiency metrics look fantastic. But, it’s encouraging to see that his snap share reached 100 percent in five of the nine games he played in, while only falling below 89.4-percent in two games: his NFL debut in Week 1 and the Week 12 contest in which he suffered a back injury that landed him on IR. Suddenly, his already-respectable 86-percent snap share (14th overall) appears even more impressive.  Consider that his snap share will likely increase, and that he’ll be upgrading to Jameis Winston, and ASJ is looking more and more attractive in the double digit rounds of your drafts.

His 11.20 agility score is better than that of a lot of RBs, and his 10.25 catch radius can be considered elite. His best comparable player per PlayerProfiler.com is Tyler Eifert, whose best comparable player is in fact Austin Seferian-Jenkins. If you can stomach the thought of passing on the TE position entirely until the double digit rounds, the data is almost daring you to spend two double digit round selections on these two players when applicable.

New Jersey is the latest city in the ongoing Age of FitzMagic saga, so all of the Jets skill players deserve additional consideration for your fantasy teams. Jace Amaro only recorded a 41.9-percent snap share in 13 games played in his rookie year. He’s suffered two concussions in two years, a red flag moving forward. He wasn’t too efficient when he did see the field, and there’s news coming out that he’s now considered an H-back instead of a TE. If this is true, the obvious downside is that he won’t see the field as much because he won’t be blocking as an in-line TE. Despite the glaring negatives, there is enough about Amaro’s profile that leaves room for optimism.

Jace Amaro has the requisite size we’re looking for in our late round TEs. His position third-best 15.9-percent Hog Rate tells us that despite only receiving 54 targets, he was well-utilized when he did see the field.  Critics will be quick to point out that he was “plagued” by drops in a rookie season that saw him adjust from playing in a gimmicky spread offense at Texas Tech to a real-life NFL offense. While he was indeed credited with six dropped passes on ProFootballFocus.com, he recorded a 100-percent Contested Catch Rate on PlayerProfiler.com. Granted the sample size of five targets was small, but it’s still impressive considering his alleged penchant for drops. In college, his role was similar to H-back, and he recorded a 71st-percentile College Dominator Rating of 23.3-percent (106 catches for 1,352 yards and seven touchdowns).

With a 200.3 MFL ADP, Jace Amaro is an afterthought to the general fantasy community. If he can improve his blocking enough to see the field more, which his size suggests is possible, he has a good chance to cash in on his sleeper status. As long as the shoulder injury Amaro suffered in the Jets’ preseason opener isn’t too serious, he’ll be a TE to keep your eye on this season.

All three of these players have been labeled medium to high injury risks on SportsInjuryPredictor.com, which is not surprising.  As we’ve already discussed, TE is a fragile position, which is one of the primary reasons not to spend early draft capital chasing one. Instead, save your picks until the later rounds and target a big-bodied, athletic, pass-catching TE.  They might not GronkSpike™ when they score, but they will score, in real-life and on your fantasy team.