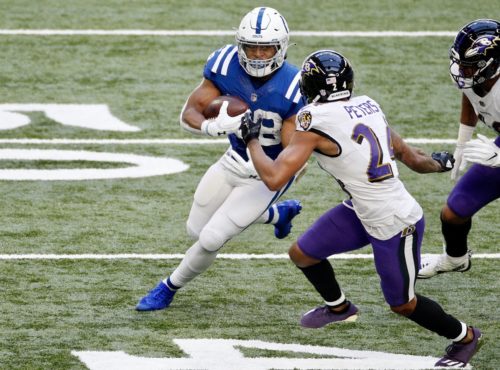 We’ve entered the back half of the 2020 fantasy football season. At this point, we know what our dynasty teams are, and with league trade deadlines upon us, time is running out to change them. Managers are gearing up to make a playoff run, while others are looking towards building a future contender. To complement this, the Dynasty Market Movers report shifts its focus to provide a wider view of the market landscape. Along with PlayerProfiler’s advanced stats and metrics, use these market trends to make wise dynasty decisions.

Drew Lock‘s sophomore season did not start out well, but he’s progressively turned it around since returning to action in Week 6. As a result, Lock has moved to QB17 on PlayerProfiler’s dynasty rankings. A Week 9 matchup with the Atlanta Falcons brought out a career-best fantasy point output. Lock threw for 313 yards, two touchdowns, and an interception on 48 passing attempts. He added another 47 yards and a touchdown on the ground. Despite the improved production, his season-long metrics are not impressive and there is still much debate on him as a franchise quarterback. The remainder of the season will be pivotal for the 23-year old.

Heading into the 2020 season with Marlon Mack and Jonathan Taylor on the roster, Nyheim Hines had become the third wheel in the Colts backfield. Fast forward nine weeks and Hines has 28 receptions and 220 receiving yards (both good for No. 8 among qualified running backs) on a 32.5-percent (No. 63) Snap Share. His fantasy output on a week-to-week basis has been up and down, but Hines has produced boom weeks resulting in Top 5 running back performances. Hines led the team in receptions heading into Week 10 and exploded for another 115 total yards and two scores on 12 carries and five receptions on Thursday night. With Taylor struggling, Hines is being called on to bring a spark to the Colts backfield. He’s climbed to RB34 on PlayerProfiler’s dynasty rankings.

Kudos to those who were able to buy low on Michael Pittman during his absence with a calf injury. Eased back in Week 8, Pittman ran a season-high 37 routes last Sunday against Baltimore, catching four of seven targets for 56 yards. He drew a primary cornerback match-up of Marcus Peters in that game.

Just a taste of what’s to come. pic.twitter.com/zmnkkLxaTm

At WR38 in the dynasty rankings ahead of veterans Adam Thielen and Odell Beckham, the Colts rookie WR will see his dynasty stock continue to rise after dropping 101 receiving yards on the Titans in Week 10.

Darnell Mooney has been a darling of the Dynasty Market Movers report, being featured and followed as a Watchlist Candidate way back in Week 2. Moving up 27.32 lifetime value points to WR53, Mooney is one of the biggest risers on PlayerProfiler’s dynasty rankings.

In Week 8, Mooney caught five passes for a career-high 69 yards and his first NFL touchdown. Last Sunday, he drew a season-high 11 targets. The fifth-round rookie has established himself as Chicago’s No. 2 WR, running at least 42 routes each of the past three games. With 779 (No. 11) Air Yards and a porous Vikings secondary on tap, a 100-yard breakout performance may be coming soon.

The Saints rookie tight end saw his best performance of the season in Week 9, catching three passes for 39 yards and a touchdown. At 6-5, 255-pounds, Adam Trautman has a solid prospect profile that includes a 11.05 (95th-percentile) Agility Score, 38.1-percent (97th-percentile) College Dominator Rating, and 19.6 (87th-percentile) Breakout Age. Coupled with the fact that the Saints traded up for Trautman, and with Jared Cook a pending free agent in 2021, you have an exciting dynasty asset.

Jonathan Taylor is struggling, you may have heard this. His dynasty ranking has fallen and is teetering on the edge of the top 10. Since returning from bye, the much-hyped prospect has seen his Snap Share fall from 35.6-percent in Week 8 to 30.8-percent in Week 9. Taylor fumbled his way to a season-low six carries in Week 9. Heading into Week 10, Taylor sits third amongst rookies RBs with 416 (No. 18) rushing yards and has 178 (No. 18) receiving yards, but he has not been efficient. He averages 3.9 yards (No. 42) True Yards Per Carry, has 18 (No. 32) Evaded Tackles, and a 14.3-percent (No. 49) Juke Rate. Sure it doesn’t look good right now given the high expectations, but it would be foolish to panic sell in dynasty at this point. Take a deep breath and stay patient.

With injuries decimating the 49ers running back depth chart, the promotion of undrafted free agent JaMycal Hasty put him on the fantasy radar in Week 3. Unfortunately, he has yet to seize the opportunity, recording only 36 (No. 61) carries and six (No. 82) targets for 172 total yards.

reminder: jerick mckinnon is not dead yet.

Hasty’s usage peaked in Week 8 with 12 carries and one target for 31 total yards and a touchdown. In Week 9, his Snap Share fell back to a more typical 25.0-percent and he saw only four carries and two targets for 13 yards. Around this time, Jerick McKinnon appeared to recover from his tired legs and regained control of the backfield. As 49ers running backs project to return for injury after the Week 11 bye, Hasty’s 2020 outlook is likely fading.

Bryan Edwards returned to the lineup from injury in Week 9 and the third-round rookie played…one snap. The Raiders took the whole idea of easing a player back into the lineup to a new level. Edwards began the season as a starter opposite Henry Ruggs, but has produced just five (No. 141) catches for 99 (No. 127) yards.

During Edwards’ four-game absence, Nelson Agholor stepped in and drew 17 targets for 11 receptions, 218 receiving yards, and three touchdowns. The trend did not change in Week 9 with Agholor playing on 89.8-percent of snaps, registering another 55 yards and a touchdown. For the time being, the exciting rookie prospect’s dynasty stock has dropped by 9.99 lifetime value points to WR52.

With a lack of target competition, Jamison Crowder started the season off commanding double-digit targets through his first four games. He translated this into three 100 yard-plus performances and looked like a value WR1. Unfortunately, he was derailed by hamstring and groin injuries that forced him to miss three games.

Denzel Mims is the #Jets WR1

Working back from injury in Week 9, Crowder played 69.8-percent of snaps, ran only 18 routes, and saw just two targets. Unlike early in the season, Denzel Mims and Breshad Perriman were also in the lineup for Week 9 and commanded a combined 15 targets. Crowder’s target hog days look to in jeopardy, which is not inspiring given his shallow 8.3 (No. 89) Average Target Distance rank. The 27-year-old has fallen to WR54 on PlayerProfiler’s dynasty rankings.

Tyler Higbee broke out in a big way over the last five games of 2019, scoring an average of  21.4 fantasy points between Weeks 13 and 17. However, that took place with Gerald Everett out of the lineup with a knee injury. Aside from a three touchdown performance in Week 2, Higbee has reverted back to his TE2 status in 2020 with Everett in the fold.

In 2020, Higbee is averaging 3.6 targets per game to 3.9 for Everett. Dynasty managers will see Higbee’s production as a disappointment this season. However, through seven games and a hand injury, he has actually outscored what he did in his first seven games of 2019.