Terry McLaurin has rented out space in this portion of the Value Index article for some time now. Despite an Air Yards Share that is tops in the league by more than two percent, McLaurin is habitually underpriced on DraftKings. While it may be his abysmal quarterback situation that is driving the price down, DFS players should continue to insert him into daily lineups regardless of who is under center for Washington. He has topped double digits fantasy points in all but one game this season, showing he is both situation and matchup proof. Squaring off against Detroit’s horrendous passing defense in Week 10, McLaurin is set to boom for possibly his best game all season.

Just as everyone predicted this offseason, Robby Anderson is the WR1 in Carolina. While the peripheral numbers suggest that he is essentially splitting WR1 duties with D.J. Moore, Anderson has outscored Moore thus far this season, averaging 15.4 (No. 18 among qualified wide receivers) Fantasy Points per Game as compared to Moore’s 13.0 (No. 38) mark. While this difference in points per game appears close, it should be even wider, with Anderson having 378 Unrealized Air Yards to 324 (No. 22) for Moore.

With the regular season more than halfway over, it’s time that DFS players embrace the year 2020 and begrudgingly accept that Anderson is not just the WR1 on the Panthers, but a weekly top option in DFS.

In the games that Diontae Johnson has been healthy enough to play more than 70-percent of the snaps, he has averaged 19 Fantasy Points per Game. This would place him as the WR6 overall on the season.

diontae johnson is averaging 12 targets per game in his 4 weeks with an 80% snap share this season.

$5.2K vs. an up-tempo bengals team and their banged up secondary. pic.twitter.com/MdwibOKC9B

Clearly Pittsburgh’s top passing game weapon, Johnson just needs to avoid injury to be a top tier option at the position. At $5,200 on DraftKings, this injury risk is overbaked into the price. He’s a no-brainer cash play and has tournament-winning upside.

Henry Ruggs has disappointed thus far as the first wide receiver selected in the 2020 NFL Draft. Setting aside a Week 5 outburst in which he scored 19.8 (No. 16) fantasy points, Ruggs has averaged only slightly more than 4.0 Fantasy Points per Game. Despite his entry-killing floor, Ruggs has seen at least 60 Air Yards in each of the past two games. He is best suited for tournament lineups as a contrarian play that has boom potential against an exploitable Broncos secondary.

Despite offseason narratives, the Rams have used three wide receiver sets on 68.0-percent of all offensive snaps. The clear third option among Rams receivers, Josh Reynolds has assumed a greater role in the offense lately. Since Week 6, he has seen at least 70 Air Yards per game. 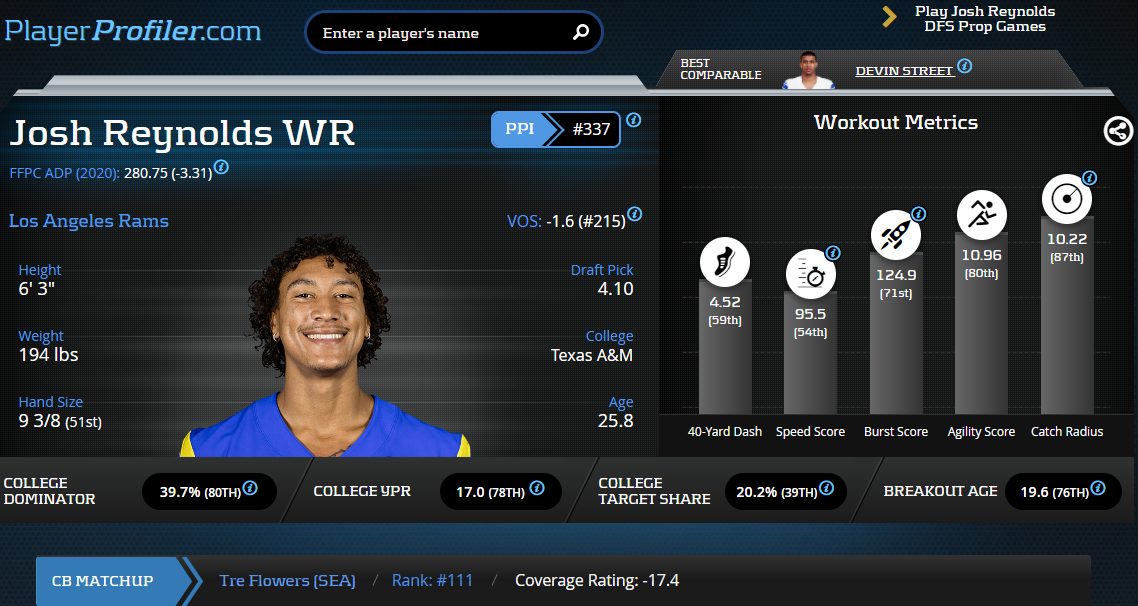 Set to face off against the Seattle Seahawks, the most magnanimous passing defense in all of football, Reynolds makes for a fine tournament play under the assumption that the Rams look to move the ball through the air in Week 10.

With Jerry Jeudy‘s Week 9 breakout stealing the show, some may forget how reliable Tim Patrick has been. He averages 11.9 (No. 43) Fantasy Points per Game and continues to see opportunity. Since Week 4, Patrick has averaged 110 Air Yards per game. While he doesn’t have the type of upside needed for tournaments, he makes a fine cash game play.

Tee Higgins is part of a receiving triumvirate that is buoyed by Cincinnati’s high-volume passing offense. He has seen at least 50 Air Yards and has finished with double digit fantasy points in every game since Week 2. Because of the way the Bengals spread the ball around, he makes for a better cash game play, as he is not seeing the type of volume required for a spike week.

Mike Williams has now made this list in each of the past four weeks. 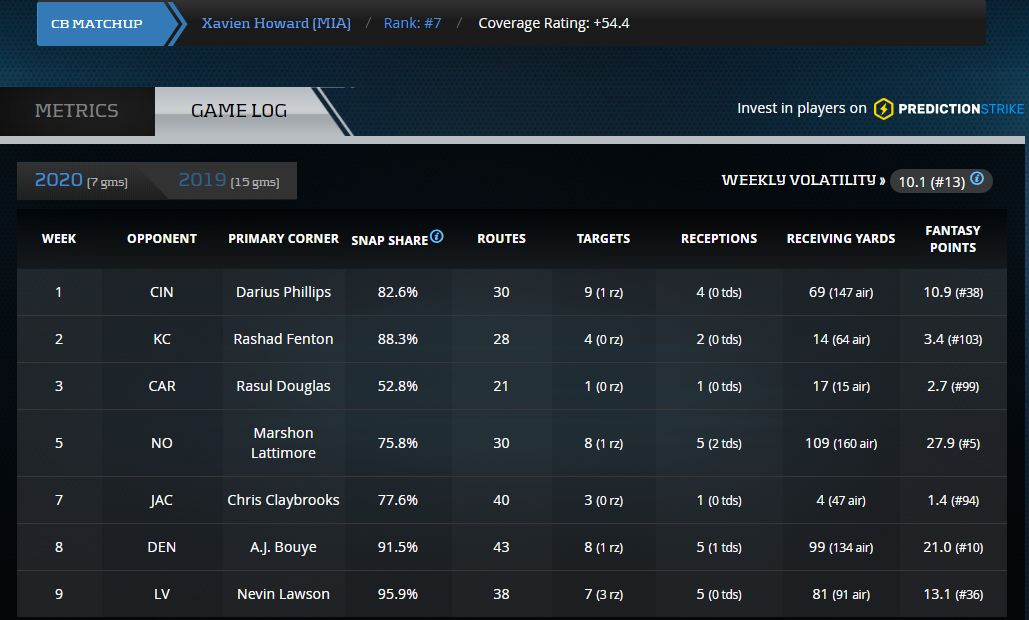 There is little else to say that has remained unsaid. Williams now has back-to-back games with five targets and 90-plus Air Yards. He continues to be heavily targeted downfield with a 16.5 (No. 7) Average Target Distance mark. He’s an ideal play in all formats.

Of course the one week Marquez Valdes-Scantling decides to realize some Air Yards, he is not on the main slate. Typical! Since all-pro Davante Adams‘ return, MVS has been a highly volatile play, seeing anywhere from 131 Air Yards to 18 Air Yards on a weekly basis.

Set to face off against the Jaguars in Week 10, the Packers may not need to air it out to get the win, which makes Valdes-Scantling a risky tournament play.

As alluded to earlier, D.J. Moore is essentially splitting the WR1 role in Carolina with Robby Anderson, who has vastly outproduced him. Moore is also coming off his worst Air Yards performance of the season, seeing only 14 in Week 9. Facing off against a stout Buccaneers defense, h’s a contrarian Hail Mary play in Week 10.

A.J. Green appeared to be clawing his way back to fantasy relevance with over 100 Air Yards in Weeks 6 and 7, posting over 15.0 Fantasy Points per Game in both games. However, he again was tripped up by father time in Week 8, posting only 3.9 (No. 73) fantasy points.

Facing off against a top Steelers defense and projected to see the most favorable matchup among all Bengals wide receivers, Green is a preferred contrarian play.

Since Sterling Shepard‘s return from injury, Darius Slayton‘s usage in the Giant’s passing game has cratered. It reached an all-time low last week when he saw only six Air Yards. However, he maintains a high Air Yards Share as a result of being the only Giants wide receiver who can appropriately stretch the filed, evidenced by a 12.9 (No. 28) Average Target Distance mark. With Shepard back, Slayton is solely a tournament play who may or may not catch a deep ball.