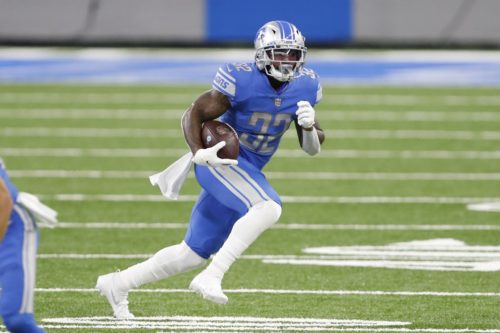 One of the more frustrating components of fantasy football involves shared backfields, especially when it’s a committee with three running backs. We’re here to help in decoding split backfields. In hopes of doing so, we look at advanced metrics such as Snap Share, Opportunity Share, and Weighted Opportunities. To start, we analyze the Detroit Lions backfield to look at what’s happening with D’Andre Swift, Adrian Peterson, and Kerryon Johnson. Then, we move to the Baltimore Ravens and their three-way running back carousel.

Rookie D’Andre Swift leads the Lions backfield in several opportunity and production metrics, particularly Snap Share and Weighted Opportunities. He provides the most all-around fantasy production in the rushing and receiving game. Veteran Adrian Peterson edges Swift in total yardage, but most of his productivity has come on the ground. On the flip side, former second-round pick Kerryon Johnson hasn’t logged a Snap Share above 35.2-percent in any game this season.

Similar to Frank Gore, Peterson continues to grind out yards on the ground even into his mid-30s. He leads the Lions with 350 (No. 26) rushing yards, but his Snap Share and Weighted Opportunities both rank behind Swift. Though he does edge out Swift with his team-leading Opportunity Share. Although Peterson leads the Lions in rushing yards, the Snap Share and touches have gradually declined over the past four weeks.

Currently, Johnson isn’t fantasy relevant with Swift and Peterson both healthy and producing in their roles. Before Week 9, the Lions barely involved him in the passing game. On the season, he only has 109 (No. 69) rushing yards and 79 (No. 52) receiving yards.

In terms of efficiency, D’Andre Swift has displayed efficient production with 5.7 (No. 12) Yards per Touch and a +18.3 (No. 16) Production Premium. Though it’s worth noting that despite an 87.8 (No. 11) Run Blocking Efficiency rating, Swift ranks below average with seven (No. 64) Evaded Tackles and 75 (No. 45) Yards Created. Hopefully, his touches and opportunities increase moving forward with his efficient production.

With D’Andre Swift‘s role increasing, he ranks as Detroit’s most fantasy-relevant running back. Unless there’s an injury to Adrian Peterson, it doesn’t look like Swift’s Snap Share and opportunities will increase too significantly moving forward. Peterson’s role continues to decline with his primary involvement being in the rushing game. Unfortunately, Kerryon Johnson also occasionally eats into Swift’s production and workload. However, continue to fire up Swift as an RB2 in PPR leagues. His pass-catching acumen is evidenced by his 34 (No. 11) targets, 26 (No. 11) receptions, and 207 (No. 10) receiving yards.

Like the Lions, the Ravens have a mixture of a veteran back in Mark Ingram, a rookie in J.K. Dobbins, and a third running back in Gus Edwards. The Ravens run a league-high 33.2 Team Run Plays per Game, but they unfortunately split up the touches three ways. With Ingram injured in Weeks 8-9, Dobbins edged out Edwards in Snap Share and touches. Dobbins receives the most targets, but only has only averaged 2.6 over the past five games. Meanwhile, Edwards and Ingram have only totaled 11 targets combined on the season.

The Ravens are among the league’s more run-heavy teams, but all three running backs interestingly average a similar amount of rushing yards per game. On the season, Mark Ingram has 225 (No. 45) rushing yards with 25 (No. 88) receiving yards and 37.9 (No. 63) Weighted Opportunities. J.K. Dobbins leads the team with 59.5 (No. 42) Weighted Opportunities, so it makes sense that he leads the team with 18 (No. 42) targets and 87 (No. 47) receiving yards. As a whole, Lamar Jackson doesn’t throw to the running backs often.

Gus Edwards leads the Ravens trio with 329 (No. 29) rushing yards and, unsurprisingly, 11 (No. 108) receiving yards. Although Edwards barely earns receiving production and targets, he ranks No. 49 with 54.4 Weighted Opportunities.

When diving a little deeper, we notice trends favoring J.K. Dobbins in terms of Snap Share, opportunities, and production over the past two weeks. Granted the increased snaps and usage for both Dobbins and Edwards came with Ingram ruled out in Weeks 8-9.

Even with Ingram out, Dobbins and Edwards continue to share opportunities and production. However, we note the efficiency of all three running backs particularly favoring Dobbins.

Hopefully, J.K. Dobbins‘ role increases moving forward since he ranks highly in the important efficiency metrics. Dobbins holds a 5.8 (No. 10) Yards per Touch average, a 33.3-percent (No. 7) Juke Rate, and a +11.5 (No. 25) Production Premium. With Ingram injured in Week 9, Dobbins didn’t take advantage of these additional opportunities facing a tough Colts defense. Similar to D’Andre Swift, Dobbins looks explosive and looks like the most exciting running back on his team. Another efficiency metric where Dobbins stands out involves is Yards Created. Dobbins has totaled 124 (No. 27) Yards Created compared to 56 (No. 50) for Ingram and 76 (No. 44) for Gus Edwards.

As mentioned earlier, Edwards leads the Ravens in rushing yards and ranks in the middle of the trio in terms of efficiency. Edwards averages 4.4 (No. 44) Yards per Touch mark and 4.2 (No. 28) True Yards per Carry, with a 14.3-percent (No. 49) Juke Rate, and -13.5 (No. 61) Production Premium. With Edwards only involved in the run game, he rates as more of a touchdown-dependent backup running back based on the matchup.

Prioritize J.K. Dobbins in the Ravens backfield due to his involvement in the passing game, explosiveness, and efficiency. Hopefully, the Baltimore backfield trends towards the Lions backfield in that the trio turns into a duo of running backs with an emphasis on the rookie. The trickier part of navigating this Ravens backfields is accounting for the rushing ability and production of quarterback Lamar Jackson. Add in the fact that Jackson hardly passes to his running backs, and it lowers Dobbins’ ceiling. Prioritize Gus Edwards in non-PPR leagues and fade Mark Ingram in all formats.