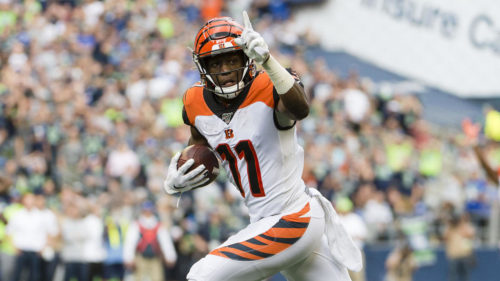 The Week 17 DFS slate on FanDuel is always a tricky one. While some teams actually let us know that they’re resting their starters, others want us to play a guessing game with how much playing time they’ll receive. Still, the safest plays are always going to be priced as such, meaning affording all of them in the same lineup requires some imagination. “Lineup makers” are the way to achieve this ideal roster. These cheap DFS options offer the lineup flexibility needed and can be identified using advanced stats, metrics and analytic player profiles. Here are some lineup makers for the Week 17 main slate.

Kerryon Johnson returned from a two month hiatus and was instantly thrust into 11 touches in a meaningless game. The Lions clearly have no issue utilizing him despite being eliminated from the postseason.

While he only put up 43 total yards on those 11 touches, he was facing an elite Broncos defense. This week, he’ll be set up far better against a Packers defense that cedes production to running backs while donating extra assets to pass defense. According to Football Outsiders, they rank 22nd in rushing DVOA, so Johnson should find more room on the ground.

With upper-percentile athleticism across the board to go along with a 36.4-percent (83rd-percentile among qualified running backs) College Dominator Rating at Auburn, he’s clearly capable of churning out production when given the proper touches. Look for the Lions to expand Johnson’s workload in his second game back from injury. Plus, his price never adjusted from the stone-minimum for an RB.

Darius Slayton was banged up with a knee injury in Week 16, playing a season-low 30.9 percent of snaps, and didn’t log a reception. Golden Tate picked up his slack, seeing 11 targets from Daniel Jones and posting a team-high 96 yards.

Slayton has yet to log a full practice this week, meaning Tate will continue to operate as the primary option for the Giants. He’ll be running the majority of his routes in the slot on Rasul Douglas, who ranks No. 119 in PlayerProfiler’s CB rankings. The slot is money for NFL receivers, getting free releases on the defenses worst coverage man.

The Eagles have allowed the sixth-most yards to receivers on the season. This game also has a 45.5-point total, which is the second-highest on the slate. Tate’s low price makes him a bargain in this game environment.

It’s not often that we can find an alpha receiver that has broken a slate multiple times this season at under $6000. With multiple games of over 100 yards and two touchdowns, D.J. Chark has that ability.

Chark has rare athleticism with a 115.3 (97th-percentile) Speed Score and a 132.5 (93rd-percentile) Burst Score. His team also knows how to utilize those traits, as his 25 Deep Targets ranks No. 7 among WRs this season.

Chark missed one game with an ankle injury, but he played 94.6 percent of snaps and led his team with seven targets in his first game back. Chark broke the slate against the Colts the first time these teams played this season. Look for him to smash his cheap salary.

Will Fuller once again exited early last week, putting Kenny Stills back into field-stretching duty. It wasn’t a fruitful day, as the Buccaneers pass rush got after Deshaun Watson sacking him five times. That prevented him from throwing the ball deep, but Stills still led the team in Air Yards, receiving yards and targets.

Stills has another soft matchup with Logan Ryan and his 31st-percentile Speed Score this week. He allowed 11 receptions for 96 yards and a score in his coverage last week against the Saints. Stills found the end zone twice when these teams played in Week 15.

DeAndre Hopkins is also at risk of missing this game. That would lead to more targets for Stills, and Keke Coutee ($5400) would also see an expanded role.

John Ross and his NFL-record 4.22 40-yard dash always present a mismatch. The only problem for him has been his health and a lack of opportunity. Ross put those concerns to bed in Week 16, running a season-high 46 routes and seeing 13 targets against the Dolphins. He only caught six of them, but he saw a ridiculous 283 Air Yards in that game.

The Bengals clearly want to take advantage of his speed, and that level of opportunity offers a chance to blow the slate wide open. Ross cemented himself as the second target opposite Tyler Boyd, so he is squarely in play in both tournaments and cash lineups.

With plenty of injuries all over the secondary, Washington was forced to play Coty Sensabaugh and Aaron Colvin against the Giants. It went about as well as one would expect, with Sterling Shepard and Golden Tate combining for 172 yards and a touchdown. Sensabaugh was the biggest liability in the slot, allowing six receptions for 120 yards and two touchdowns to Giants pass-catchers in his coverage.

This is a dream spot for all Cowboys receivers, and Randall Cobb should draw the best matchup in the slot. He is always the third option in this passing game, but all of them can feast in this matchup. A Cowboys stack should crush DFS in this must-win game for Dallas.

Jonnu Smith has now scored in three straight games for the Titans. He isn’t seeing massive target volume, but Tennessee knows he is one of their top playmakers after he ran for a 57-yard touchdown in Week 15.

It is mostly a crapshoot at TE for those not paying up for the top options, so playing the one with a 127.0 (93rd-percentile) SPARQ-x score gives us a chance at multiple big plays.

With Mark Andrews unlikely to play in this meaningless Week 17 game, Hayden Hurst will fill his role as the “move tight end” in this offense. Nick Boyle will always play more snaps with his blocking pedigree, but Hurst should enjoy more targets from Robert Griffin III.

Many forget that he is a first-round talent that was selected before Lamar Jackson. With a 105.9 (81st-percentile) Speed Score, he has big-play ability, which he flashed in Week 14 with a 61-yard touchdown catch. Roll with Hurst in some tournament lineups if needing a cheap option.