The Long Gain: Bargain Running Backs to Target in Week 17 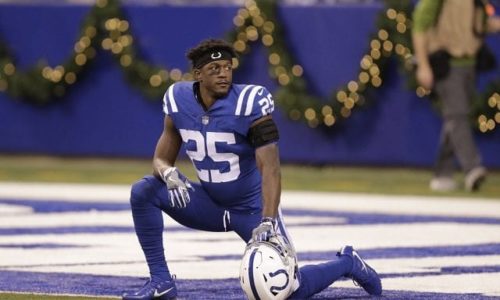 Heading into Week 17 of the NFL season, an important factor to consider when building our DFS lineups is that for a good majority of the league, the season is already over.

Week 17 is often unpredictable, with players who have seen limited snaps all season finally getting a chance to show what they’re capable of. We also have to consider what coaches of teams eliminated from playoff contention may do in order to play the role of spoiler against their opponent.

Despite the difficulties that Week 17 can present, it also presents another opportunity to win money this NFL season. It’s time to grind out one more week, as we look to close out the NFL season with a little more cash than we started with.

One of the benefits that comes with divisional matchups is that we get a chance to look back on a game from earlier in the season when two teams last met. In this case, if we look back at the Chargers’ Week 11 matchup against the Chiefs, we’ll find that Austin Ekeler finished as the RB4 with 21.2 PPR points.

During the Week 11 clash with the Chiefs, Ekeler erupted for 132 total yards on 13 touches, but didn’t manage to find the endzone. He saw 12 targets on the day, and finished with eight catches for 108 yards, while adding another 24 yards on the ground over five carries.

This may be the last chance we get to play Ekeler at a discounted rate, assuming the Chargers elect to part ways with Melvin Gordon at the end of this season. It’s time to take advantage of this bargain buy one last time, and fire Ekeler up for Week 17.

It was back in Week 11 that Mack had a chance to be the beneficiary of a porous Jacksonville defense. He totaled 109 yards on 14 touches and one touchdown, finishing the day with 16.9 fantasy points and an RB11 week.

When healthy, Mack has been the unquestioned leader of the Colts’ backfield. Boasting a 63.3-percent (No. 18 among qualified running backs) Opportunity Share on the team averaging 29.6 (No. 6) rush attempts per game is no small accomplishment. Mack is also No. 11 among running backs with 232 carries and is No. 10 with 1,014 rushing yards despite missing two games with a hand fracture.

Both the Colts and Jaguars are limping into the offseason, but that doesn’t mean Mack can’t go out in style against a league worst run defense.

For the final bargain buy of 2019, we reach a little deeper into the barrel to find ourselves an elite pass catcher and explosive talent out of the backfield in Ravens running back Justice Hill.

Following the injury to Mark Ingram in Week 16 against the Browns, Hill finally had a chance to shine, and finished the day with six touches for 51 yards and a touchdown. Hill’s 14.1 fantasy points last week (RB19) were his most on the season. He now has a chance to split backfield touches with Gus Edwards against the Steelers in Week 17 with Ingram having already been declared out for the game.

Despite having Robert Griffin III under center for the Ravens this week, Baltimore should still have plenty of offensive opportunities in their regular season home finale against the Steelers. Pittsburgh will be sending Devlin Hodges into the fire this week, who has just five touchdown passes to eight interceptions on the season, and now gets the Ravens in a must-win game if he hopes to lead the Steelers into the postseason.

Let’s face it, we loved Hill to start the season, and now we have a chance to love him to close out the season. Nevermind those 15 weeks in between. With rising opportunity heading his way, it’s time to embrace the bargain buy one more time, and slot Hill into our lineups this Week 17.