The tight end position in fantasy football is quite unique. On one hand, the elite ones are picked early, and the rest are drafted similarly to a drunken game of darts. Just toss the sharp ends at the board and hope at least one of them sticks in. Once the top five are gone, it is truly a shoulder shrug emoji. Who should team builders select? In redraft leagues, I believe waiting on the Chicago Bear’s tight end, Cole Kmet is the correct choice.

Kmet is currently ranked as TE 11 and is getting drafted around pick 130 (round 11 to round 13) according to PlayerProfiler ADP data for seasonal leagues. Drafting Kmet in the double-digit rounds presents the opportunity to get a viable weekly option with some value. This is especially true in leagues drafting on Sleeper where is he the No. 13 tight end off of the board. Kmet finds himself on Cody Carpentier’s Must Draft List which is encouraging given Cody’s football expertise. He is being taken as a top 12-15 option, but Kmet has top 8-10 upside and that makes him a candidate to be this year’s tight end breakout. 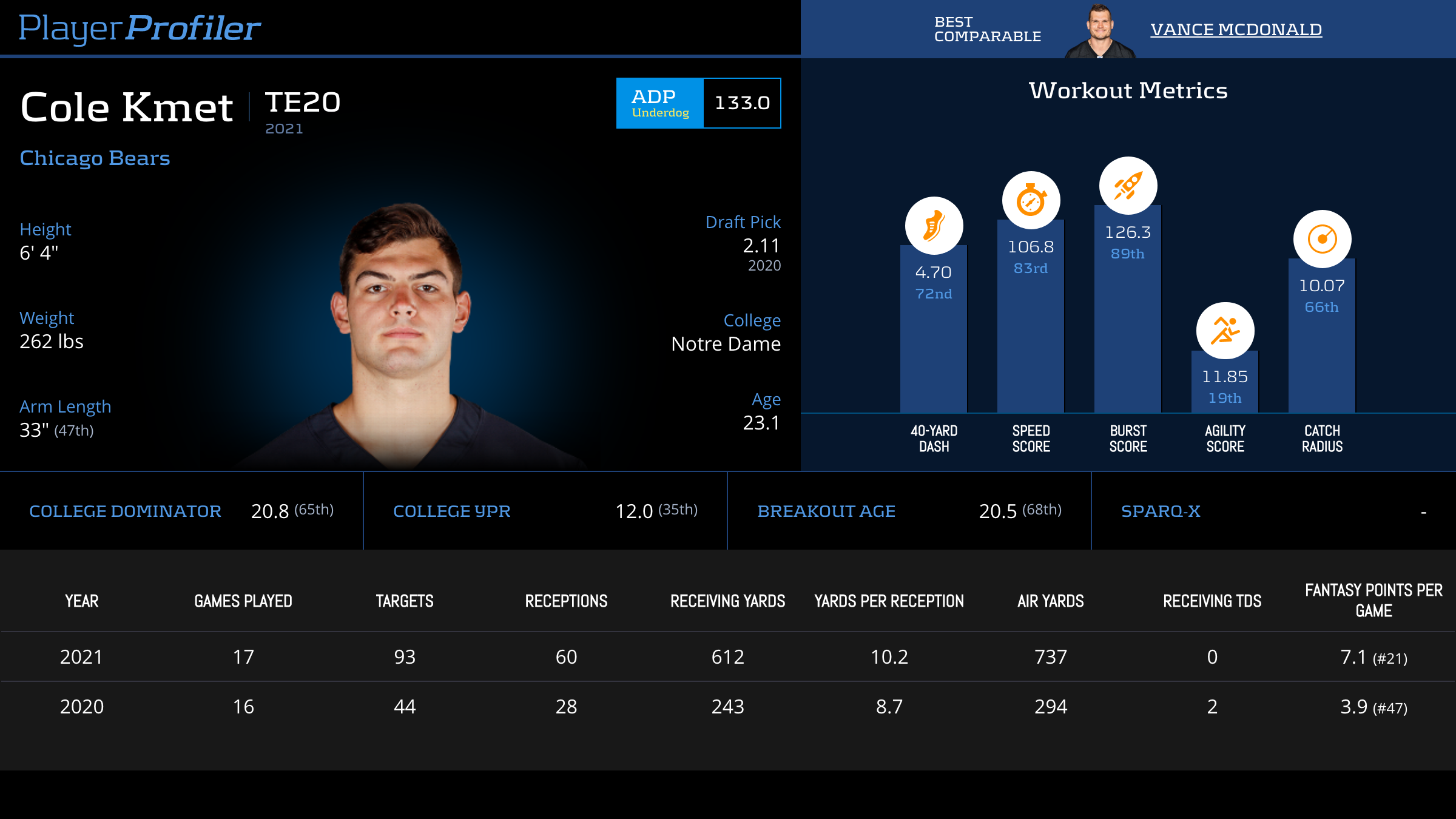 In 2021, Kmet saw 93 targets, caught 60 of them for 612 yards but did not catch a single touchdown. He finished the year as the TE 20 according to PlayerProfiler’s Data Analysis. Despite being the No. 20 best tight end last season, Kmet was top 10 in a number of performance metrics. Those 60 receptions mentioned earlier was good for No. 8 most amongst qualified tight ends. He had 737 Air Yards (No. 9), 9 Deep Targets, (No. 6), and a 7.9 Average Target Distance (No. 10). Kmet wasn’t a part of a good offense. We know this because Kmet ranked No. 7 in Unrealized Air Yards with 371. He finished the year with more Expected Fantasy Points per Game than Hunter Henry (TE 10), Pat Freiermuth (TE 13), and Noah Fant (TE 12). This is why Cole Kmet will be the 2022 tight end breakout.

To The Fantasy Football Shark Tank

Picking Kmet as this season’s breakout makes a lot of sense. He checks all the boxes for a player on the verge of taking his game to the next level. Chicago’s tight end is young (23.4), athletic (88th-percentile Burst Score), and has a clear path to 100+ targets. Justin Fields is a high-end quarterback prospect who is poised to take a step forward in his development and that is a plus for Kmet.

The Bears do not project to have an exciting offense despite having some talent on that side of the ball. Chicago’s offense ranked No. 26 in total DVOA according to Football Outsiders. The organization did fire head coach, Matt Nagy, and the Bears hired the former Colts’ defensive coordinator, Matt Eberflus. We cannot guarantee he will be able to get more out of the offense.

Along with a mediocre offensive depth chart, there is a particular metric that is important in projecting Kmet. That metric is Expected Receiving Touchdowns. In 2021, Kmet was expected to catch 3.39 touchdowns according to PlayerProfiler’s Data Analysis. Even with that mark, he would have finished as TE 14-15. So it would take even more than touchdown regression to propel a proper breakout.

It is hard to not like Kmet as a tight end breakout candidate. This is why I will invest with 82-percent confidence.

Take No. 2 – Sequon Barkley is a MUST Draft RB in Redraft

Saquon Barkley’s career has been a roller coaster ride. He was selected with the second overall pick, performed like a top ten running back two years straight, and then the injuries started. The Giants’ tailback hasn’t been a reliable fantasy asset since 2019. He ended his 2021 campaign as the RB 30 overall and the RB 27 on a points per game basis. That changes this season because Barkley will return to performing like a top ten running back and this is why he is a must draft!

At this point in the fantasy football season Barkley being drafted in the second and third round. This is already trending upwards in draft rooms. The football Giant is the No. 10 running back on PlayerProfiler.com’s Seasonal Player Rankings. That is right in line where he is being drafted, and given his talent profile, Barkley can far outperform his redraft price tag. The talented back did pop in some metrics which should be encouraging to fantasy football team builders. He posted a 13.3-percent Target Share (No. 8 among qualified running backs) and a 52.4-percent Route Participation Rate. 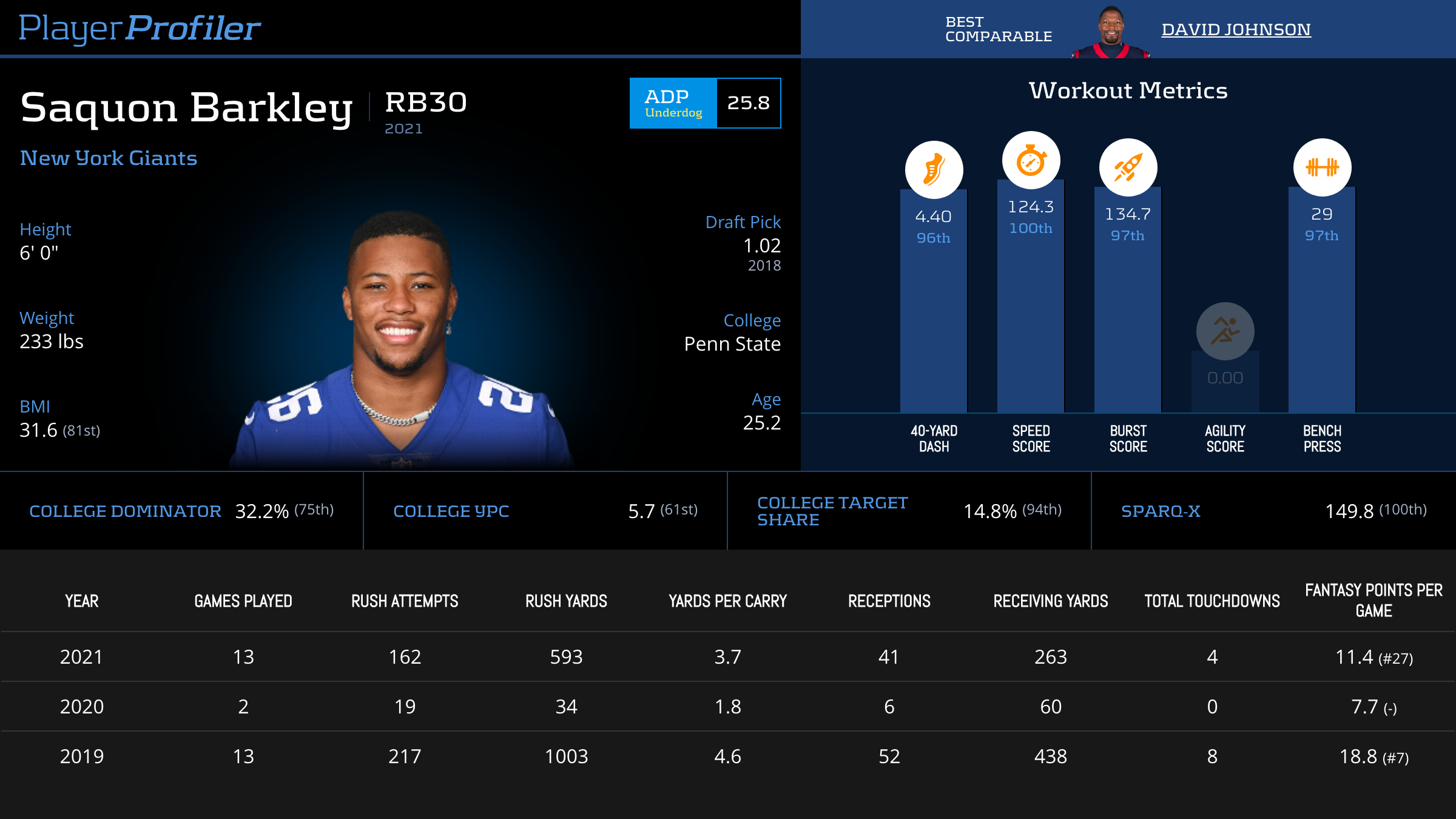 Calling last season mildly unlucky may be a bit generous, so the fact that he still showed off his receiving abilities is worth being excited about. This is especially true considering who New York’s new Head Coach is going to be.

Brian Daboll is well respected in the NFL, and he is known as an offensive master mind. Daboll specializes in the passing game. This will be fantastic for Barkley. In 2021, Barkley saw 6.8 Defenders in the Box (No. 8) and had a 24.7-percent Stacked Front Carry Rate (No. 3). An improved offense will open opportunities for the running back. Barkley is the Giants’ most talented offensive player, and if Daboll works his magic then it will certainly mean Barkley is a big factor.

Coaching was not the only improvement the Giants franchise made this offseason. New York drafted two offensive linemen within the first three rounds of the NFL Draft this past spring. Take all these ingredients, mix them up and a big fantasy football bowl, and boom Barkley finishes as a top 10 running back option this year. That is why he is a must draft player in redraft leagues.

To The Fantasy Football Shark Tank

It is so easy to be all in on Barkley for the upcoming fantasy football season. He was one of the best running back talents to enter the league in some time, and there are several positives surrounding the Giants’ offense. There is not a lot to push back on when it comes to Barkley’s 2022 outlook. New regimes will sometimes bring aboard new players to push the current roster. But in this specific case, there is no other running back who will prevent Barkley from a massive workload.

The New York tailback is in a contract year so that may be some additional motivation. Players tend to be locked in when they are playing for a massive pay day. This is yet another factor to consider when drafting in 2022.

The Giants are projected to be facing a tough schedule for running backs. Heading into the preseason, they have a -6.1 Weighted Schedule Strength which is the No. 23 worst. That is not a great sign, but the positives outweigh the negatives.

Barkley looks like a 2022 smash candidate. I’m will invest with 92-percent confidence.

There was a lot to get excited about from these two takes. Kmet appears to be a strong tight end breakout candidate and Barkley is ready to ball out. Teams that miss out on the high-end tight ends like Mark Andrews and Dalton Schultz can still have a strong team build with Kmet. Jonathan Taylor, Najee Harris, and Christian McCaffrey all have RB 1 in their range of outcomes, and so does Barkley if just a couple things break his way. Get these players in redraft formats.

That concludes Fantasy Football Shark Tank: Episode 4. Missed any of the old episodes? Not problemo. Click the links below to catch up.

Share this with LIT-TURE-ALLY everyone you know and come on back for the next installment of the Fantasy Football Shark Tank!