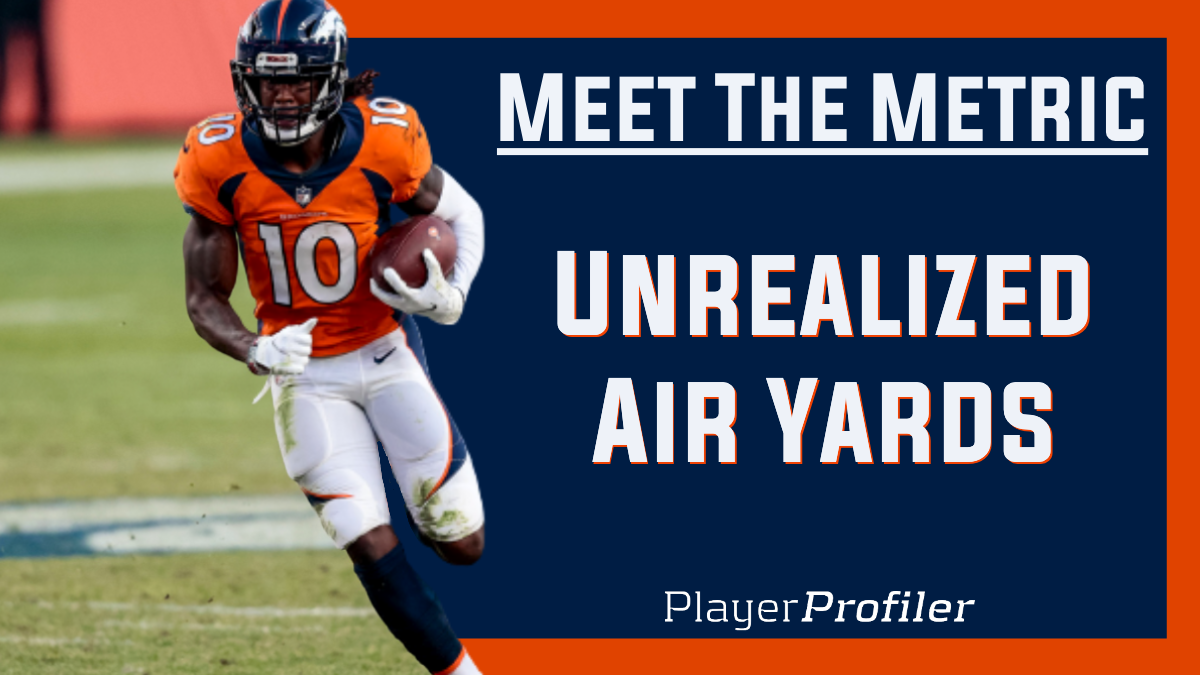 We hear you, Louis:

We still using QB “wins” huh? All the advanced/next gen stats we have now and still we use QB wins to build up and tear down QB’s. Comedy.

There are so many wonderful stats and metrics people can use to enhance their understanding and enjoyment of the game. Yet some people “in the know” continue to point to one small part of a box score to “prove” how much they know. Why they do this, and why people still listen, is beyond me.

Luckily, we of The Underworld provide viewers and readers with a virtual cavalcade of advanced stats and metrics, all geared towards helping you get to know the players you should be picking up and those you should be avoiding in fantasy circles. Unrealized Air Yards is one such metric.

Unrealized Air Yards represent the total depths of uncaught passes. Receptions never made, balls never squeezed, fantasy points never amassed. An Unrealized Air Yard is the ultimate “what might have been” in the modern NFL passing game.

The player with the second-most Unrealized Air Yards (965) was Denver Broncos rookie wideout Jerry Jeudy. He logged 1,536 (No. 6) Air Yards thanks in no small part to his steady diet of 25 (No. 7) Deep Targets. Yet he finished No. 31 with a mere 571 Completed Air Yards.

Why the huge disparity between these two players? Putting it mildly, quarterbacks matter. With Matt Ryan as his quarterback, Ridley enjoyed a 6.5 (No. 18) Target Quality Rating, with a 7.38 (No. 38) Target Accuracy Rating to which he pinned an 84.1-percent (No. 66) True Catch Rate. Jeudy, with Drew Lock sending him the ball, earned a 4.2 (No. 102) Target Quality Rating. Not to mention a 6.06 Target Accuracy Rating, which was “good” for the No. 107 rank. His 62.8-percent (No. 105) Catchable Target Rate combined with a 7.1-percent (No. 20) Drop Rate helped him finish with a 73.2-percent True Catch Rate. There were 102 wide receivers that posted a better mark.

A player posting a high share of Unrealized Air Yards is not necessarily a player to immediately shy away from. A target is, after all, earned by that player being good at catching the ball. If all players targeted were tethered to accurate quarterbacks, that would be fantastic. But fantasy football is a volume-driven game within a game. As long as players draw looks down the field, the predictive nature of Air Yards would suggest that they will start catching the ball and posting statistics that can help you in fantasy football.

That is why Jerry Jeudy is a bounceback candidate in 2021, especially if the Broncos can upgrade their quarterback. Calvin Ridley finished as the WR4 in Fantasy Points per Game in 2020 with a quarterback who was not among the elite in terms of accuracy. With someone other than Drew Lock under center for the Broncos, Jeudy could be a force to be reckoned with in 2021. His current ADP over at the FFPC is WR42. I think I’d like some of that.