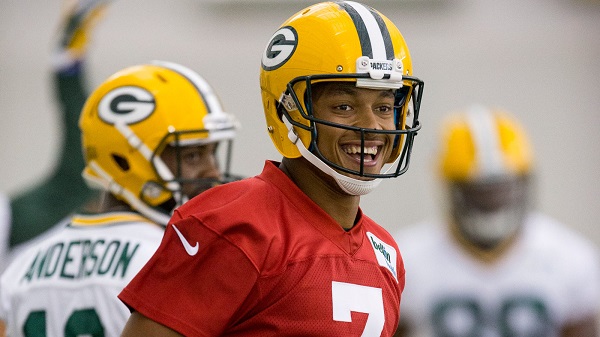 We see it happen all the time in fantasy football. One player emerges from a given week as the hot commodity that owners fall over themselves to acquire, even if it means spending a high waiver priority (or most of our FAAB) in the early weeks. Then that player goes out and does nothing to justify going after him in the first place. This year’s shining example of this phenomenon, Kerwynn Williams, was an attractive add at the time of David Johnson‘s wrist injury based on his advanced stats, metrics, and analytics profile. And while everyone ends up being correct when using hindsight to analyze fantasy football, the fact remains that Week 2 was too early in the year to justify spending so much to acquire him. There were a number of factors working against him, which we’ve seen manifest in the last few weeks.

Few times in a season does a player emerge that truly deserves that high priority pickup. The best example of that so far this season is Jerick McKinnon. An athletic freak who has been percolating for years, all he needed was the right combination of opportunity and situation to unleash his fantasy potential. With Dalvin Cook suffering a torn ACL, he was going to give you rest-of-season value regardless of how well he performed over these last two weeks. Meanwhile, Aaron Jones, another pre-Week 5 high priority pickup, has seemingly been relegated to a timeshare with Ty Montgomery.

All of this is to say that the move that helps you turn the corner on your fantasy season may not be one you have to spend any of your FAAB on at all. One of the keys to being able to win consistently in fantasy football is being able to identify potential breakouts before they happen. Stashing players that would become hot adds with a big game before any of your competitors have a chance to acquire them is a winning strategy in any format. If you were able to add Orleans Darkwa in advance of his 130-yard performance against the Broncos in Week 6, for example, you now have an efficient player running behind a top 3 offensive line per Player Profiler metrics. You can start him as your RB2 for at least the rest of the bye week portion of the season.

Keep in mind that doing this with any sort of consistent success is inherently difficult. All of these widely unowned players have warts that keep the general public off of them. Knowing who to cut in these situations can sometimes be more difficult than deciding who to pick up. There’s always the chance that you cut the wrong player, right before they breakout.  However, those who know how to properly utilize Player Profiler’s advanced stats and metrics will gain a greater understanding of when it’s time to bid big on a player.

Despite being one of the highest priority adds across all league platforms, Brett Hundley is still widely available. His ownership percentages currently sit at 12-percent (Yahoo), 13.6-percent (ESPN), and 29.68-percent (MFL). This isn’t just a player who’s going to be a stopgap for a few weeks. With Aaron Rodgers likely done for the year, Hundley becomes a full time, rest-of-season starter. There’s a chance that owners who are feeling the bye week sting will look to acquire him after Green Bay’s Week 8 bye. But if he has a big game against New Orleans this week, that could end up being too late.

Brett Hundley had a bad game in relief of Aaron Rodgers against the Vikings in Week 6. That scared many owners off of him during this week’s waiver period, despite a favorable Week 7 matchup against New Orleans. It shouldn’t have, because there are some factors working in his favor when it comes to his long-term projections. The Packers have a +9.73 (No. 7) Supporting Cast Efficiency grade, which is easier to accomplish with Aaron Rodgers under center, but is still important. He’ll also be helped by his receivers averaging 1.77 (No. 3) yards of Target Separation. The team has a 90.9 (No. 8) Run Blocking Efficiency grade if they want to lean more towards the run at times to keep defenses honest.

Brett Hundley‘s stellar athletic profile, combined with an 82.3 (81st-percentile) College QBR, shows us that he offers a lot in the way of running ability. The upside is there if you can afford to stash him heading into his Week 8 bye.

Another player who’s barely receiving any buzz despite turning in a good Week 6 performance is Devontae Booker. Despite the coaching staff’s alleged desire to get Jamaal Charles more involved, Booker actually out-snapped him last week. Though most of his production came in the fourth quarter with the game out of hand, it’s still important that Booker still saw six targets to Charles’ three in Denver’s first game coming out of their bye. This isn’t surprising given Booker’s 14.3-percent (90th-percentile) college target share.

All we can gather from the continued talk of increasing Charles’ touches is that the team is losing more faith in C.J. Anderson by the week. Though the Broncos have a 63.5 (No. 20) Run Blocking Efficiency grade, Devontae Booker. has the kind of athletic and production profile to be able to overcome that deficiency. It’s translating to the field as he’s currently averaging 11.8 (No. 1) yards per touch (albeit on only eight touches in two games), with a +50.6 (No. 19) Production Premium. A late-season emergence and breakout isn’t out of the question.

Bennie Fowler was rightfully a high-priority addition with Emmanuel Sanders already ruled out for Week 7. But, he’s still sitting at under 30-percent ownership in MFL leagues. Considering that his +22.1 (No. 34) Production Premium and +29.8-percent (No. 26) Target Premium are both light years ahead of both Sanders and Demaryius Thomas, this is baffling.

Interestingly, it was Bennie Fowler who led the Broncos in both snaps and routes run against the Giants after Emmanuel Sanders went down, despite Thomas’ monster fantasy performance. There’s also the fact that he’s going up against the same team (Chargers) that he scored two touchdowns against in Week 1 (with a healthy Sanders). There’s a chance Sanders’ ankle sprain is of the high variety, which wouldn’t bode well for his chances of coming back within the next two or three weeks. So be proactive and pick up Fowler.

In looking at potential Bills players to stash in case Jordan Matthews‘ thumb injury continues to sideline him, it’s interesting that so many of them have recorded plus efficiency metrics while Tyrod Taylor checks in with a less-than-ideal -6.9 (No. 23) Production Premium. Given how efficient most of his passing game weapons have been, despite limited opportunities for a number of them, it’s fair to wonder if we should begin blaming his negative efficiency on how bad Zay Jones has been to this point. Though he has a 91.5-percent (No. 23) snap share, he’s managed a nearly impossible 21.7-percent (No. 118) Catch Rate. That’s five catches on 23 targets, despite being on the field almost all of the time. The team needs a secondary receiving option with Charles Clay also injured, and Jones isn’t it.

Even if Jordan Matthews plays this week, the match-up against the Bucs is favorable enough that more than one pass-catcher can have fantasy viability. Andre Holmes has shown plus efficiency and co-leads the team with two TDs, despite barely being used to this point. Brandon Tate played more snaps and ran more routes than Holmes with Matthews out in Week 5, while scoring a TD and recording 10.5 fantasy points.

It’s also not out of the question that recently acquired Deonte Thompson could make an impact. A +17.3 (No. 39) Production Premium on limited snaps and targets with the Bears through the first five weeks suggests that Thompson was at least efficient with the opportunities that he did receive. A +15.1-percent (No. 33) Target Premium, which is designed to factor out bad QB play, suggests that he could make an early impact if given sufficient opportunity. Even Nick O’Leary, who saw six targets and put up 10 fantasy points in Week 5, makes for a decent TE streamer with Charles Clay out. If you end up needing to start one of these players this week, you may as well flip a four-sided coin.

While we’re on the subject of Bears receivers, Tanner Gentry and Tre McBride are names that deserve attention in deeper leagues. One was a practice squad call-up and one was a seventh-round pick who was claimed off waivers from the Titans right before the season started. Both went catchless in Week 6, so the fantasy community isn’t paying attention to them. Meanwhile, those of us who use PlayerProfiler will see that Gentry led all Bears receivers with a 98.6-percent Snap Share in his first game since his Week 2 debut. He was also the leader in routes run with 21. McBride wasn’t far behind with a 73.2-percent Snap Share and 16 routes run. Kendall Wright, playing primarily in the slot, only managed a 29.6-percent Snap Share and 10 routes run. He can safely be dropped in all but the deepest of leagues.

Mitchell Trubisky only threw 16 passes last week. While the Bears will try to lean on the run game for as long as possible with the rookie under center, it won’t be long before they find themselves in the kind of game script that requires him to throw more passes. You can do what you will with the narrative that Tanner Gentry and Trubisky showed rapport in the preseason. But the team was comfortable enough with Gentry and Tre McBride playing heavy snaps to release Deonte Thompson despite all of their injuries. Gentry displayed both elite college production and efficiency at Wyoming, so it’s not surprising to see why he got so much run in Week 6. McBride, long a favorite of the Underworld, has scintillating athletic measurables that have yet to translate to the NFL level. If either player, or both, can translate their gifts to NFL production, they can be usable fantasy assets as the season progresses. Unless Trubisky ends up being good enough to support two startable pass-catchers for fantasy purposes, the play here may be to see which one emerges as a go-to option.

If you need a free square wide receiver play in all formats for Week 7, Leonte Carroo is your man. Over the summer, DeVante Parker‘s Rotoworld page consisted mainly of hype and puff. Now it consists mainly of blurbs that suggest he’s nowhere near a return from his ankle injury. While Kenny Stills is the safer play, he’s a name that more fantasy owners know. As a result, there’s a higher probability of him already being rostered.

While Jay Cutler may no longer have the ability to support more than one fantasy viable pass-catcher per week, Leonte Carroo remains a plug-and-pray streaming option for Week 7 against the Jets. While he played third fiddle to Jarvis Landry and Kenny Stills last week, it’s hard to ignore a player with a 63.9-percent (99th-percentile) College Dominator Rating and 20.7 (96th-percentile) College YPR at an FBS program, especially if DeVante Parker misses more action than anticipated. No one knows when it’s going to happen, but Carroo’s time is coming. At the very least, you’ll want to own him in dynasty formats when it does.

With Tyler Eifert opting to undergo season-ending back surgery, Tyler Kroft becomes a player worth noticing. A look at his prospect profile doesn’t hint at a player who’s going to be a difference-making league winner. However, he’s the only player who’s stepped up as a viable secondary receiving option in this offense. He’s tied for the position lead with four end zone targets, good for a 44.4-percent (No. 3) End Zone Target Share in the Cincinnati offense. He’s averaging 2.2 (No. 7) yards per pass route. He generates a 140.o (No. 5) QB Rating when Targeted. And, his +53.1 (No. 8) Production Premium and +49.0-percent (No. 13) Target Premium are both stellar. At a position that’s always inherently difficult to predict, it behooves you to stash these kinds of players when they emerge.