An interview with New Orleans Saints running back Boston Scott 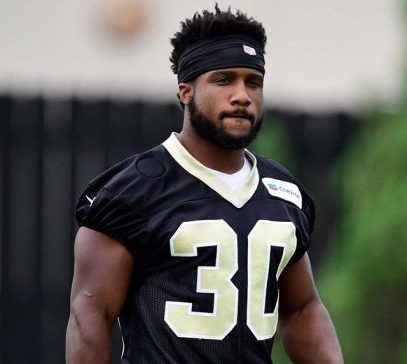 I recently had the pleasure of being in contact with an Underground favorite, Boston Scott. He did not disappoint. Scott’s advanced stats, metrics, and analytics point to an eventual NFL breakout. Scott is not only a delightful prospect, but a fantastic person. Because of his dynasty intrigue, PlayerProfiler‘s fanbase gets the exclusive interview. With it, we can further understand the wonderful addition to the New Orleans Saints’ backfield.

Me: First things first, had you ever heard of PlayerProfiler.com before we wrote an article about you?

Boston Scott: Had not, someone told me about it and I checked it out!

Me: How does it feel when you break the plane? What goes through your mind after you’ve just scored the touchdown?

Boston Scott: Like a little kid in a candy store, and it’s a great feeling I give the glory up and then go celebrate with teammates!

Me: Outside of football, where do you find your greatest joy and fulfillment?

Me: In 2017 PFF selected you for their All-Conference USA First Team Offense. Yet, you were not invited to the NFL Combine. Why do you think you were snubbed?

Boston Scott: I don’t worry about things like that now looking back, I got here so nothing else really matters.

Me: With the running back position, size seems to be a huge factor in evaluation. Many assume that because you are a “small” running back, that you could not carry the load of a typical NFL running back. Do you have a response to those that have labeled you as a “diminutive” running back? Are there any current or former NFL running backs that you have modeled yourself after?

Boston Scott: There have been RBs my size that have gone on to be pretty productive, names like Darren Sproles, Dion Lewis, Ray Rice, MJD (Maurice Jones-Drew), Jacquizz Rodgers, and Justin Forsett so it’s possible.

Me: It was said that defenses has a difficult time tracking Darren Sproles because they couldn’t see him behind the line. Have you ever heard of something like that? Do you think that your size aids to your elusiveness and ability to find holes in the line?

Boston Scott: Yeah definitely, once I learn the playbook I will be able to build on that and really show that.

Me: What are your biggest advantages on a football field? Where do you succeed most?

Boston Scott: I feel like I have advantages all over the field, my size can be viewed as a weakness but if running backs do all they are supposed to do when running the ball, pressing keys, and being patient, being shorter actually can help bec  ause you can get lost behind the line.

Me: Which aspects of your collegiate game do you think were overlooked?

Me: Strength and tackle breaking have been two of your most defining attributes as a collegiate running back. Your bio features a 425 pound bench press, a 370 pound clean, a 625 pound squat. Was there a time that you first started committing to a strength and conditioning program? Who first helped you unlock that strength? How much effort and energy do you commit to your physical fitness?

Boston Scott: It all started in high school with coach Robbie Yellot, that’s where I realized I had a knack for it, and when I really worked at it I was able to accomplish so many things from a physical standpoint I also knew that if I wanted to play at a higher level there had to be something that separated me being so small in comparison to the average measurables. That’s where I fell in love with the weight room and have been ever since.

Me: I have heard many stories of what NFL players eat. Some of the more intensive diets include Tom Brady‘s TB12 and some of the least intensive include fried chicken, pancakes on game-day, and weekly fast food. How important is your diet to you?

Boston Scott: Very important, I was blessed with a mother who is a dietitian so she did a fantastic job making sure we ate the right things growing up and that has carried on throughout my life, I love healthier options taste-wise and I know that those healthier options are key in fueling my body the right way.

Me: What areas are you putting the most work into improving this off-season?

Boston Scott: Learning the playbook so I can play fast.

Me: Alvin Kamara was one of the most impressive players in the league last year. Is he really as good as people say? How good is he?

Me: Does Drew Brees emphasize passing to running backs in practice? How involved is his relationship with the running backs?

Boston Scott: Absolutely, chemistry is important so we have time in practice and outside of practice dedicated to building the chemistry and timing.

Me: As of now, what has impressed you most about the Saints?

Boston Scott: The entire organization is awesome, they brought me in with open arms and everyone made me feel at home.

Interviews are fun in the fact that you get to hear from your favorite players, but what can we glean from this Q&A? After all, we’re all trying to get an edge over our competitors in Dynasty leagues. With that in mind, let’s briefly extract a few important bits and pieces from Boston Scott‘s answers.

First, I’d like to point out that Boston Scott views his interior running as “overlooked”. It’s important to remember that Scott can break tackles. In college, he averaged 4.2 yards after contact and forced 45 missed tackles on 180 touches in 2017. Also adding intrigue into Scott’s interior running would be his ability to get “lost behind the line.” He will be running behind an offensive line that scored a 115.1 (No. 3) in Run Blocking Efficiency. With that line and Drew Brees occupying the defenses, Scott just might be able to be a patient interior runner. Disappearing behind the O-line and reappearing in the endzone. Maybe, just maybe, he will take over the Mark Ingram role.

The biggest thing that stands out in Boston Scott‘s interview is his focus and dedication to his body. Strength, conditioning, and nutrition are a staple of his life. Scott is a state-champion weight lifter, has a nutritionist for a mother, and continues to build on his athleticism.

Even though Boston Scott is small, he’s a beast. Scott’s athleticism is illustrated by a 125.9 (86th-percentile) SPARQ-x Score, a 4.45 (91st-percentile) 40-Yard Dash, a 126.0 (84th-percentile) Burst Score, and a mind-blowing 10.82 (97th-percentile) Agility Score. Scott is an impressive athletic specimen. And he adds what many smaller running backs do not, size. Scott’s 30.5 BMI puts him in the 55th-percentile. He’s not small, he’s compact. In addition to his athletic prowess on the field, we also need to remember that one of the largest benefits of a strict strength, conditioning and nutrition regime: injury prevention. If we want one thing from our running backs, we want them to stay healthy. Scott’s dedication to this will maximize his longevity. He’s a Wayne, not a Dwayne.