Picking out players to target in drafts based on their advanced stats and metrics can be a great way to succeed in fantasy football. It’s also important to understand the ADP trends that shape how and when players are drafted. These trends can clue drafters in on where they should take the plunge on their targeted players. Here are some of the more important movers in FFPC ADP after one week of the preseason.

In the Ravens’ first preseason game, Miles Boykin caught four passes for 39 yards on nine targets. He also had a fantastic over the shoulder TD grab nullified by a holding penalty. He saw more volume than expected in his first NFL action, but fantasy owners should not overrate this performance. Boykin only played three of 12 snaps with Lamar Jackson, and was not used until the second unit took over. Baltimore wants to know what they have in the third-round rookie, and thus peppered him with force-fed targets from Trace McSorley. Boykin is a lock to make the team due to his draft capital, and his dynasty stock should be on the rise considering his 98th-percentile Speed Score and absurd overall athleticism at 6-4 and 220-pounds. In seasonal formats, however, he is still little more than a dart throw. 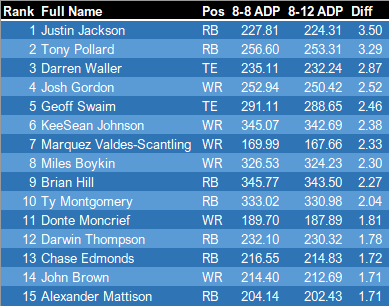 Whereas Miles Boykin‘s fantasy stock has been helped by his camp performance and preseason showing, Donte Moncrief has shown trends that point to actual in-season production. The most actionable changes made before opening day are those made to the depth chart. Despite not playing in the first preseason game and James Washington having a few good moments, Moncrief has solid grasp on the number two spot in Pittsburgh. He posted a solid 17.1-percent (No. 54 among qualified players) Target Share and 13.2 (No. 30) Average Target Distance last year with the Jaguars. If he can sustain that target distance while getting similar volume in Pittsburgh’s higher-octane offense, he will be a great value in 2019.

Alexander Mattison had a solid preseason debut with nine rushing attempts for 30 yards and one catch for a one-yard score. He played 15 of 29 first half snaps including most of the plays with Kirk Cousins on the field. Since he is listed second on the depth chart behind the oft-injured Dalvin Cook, it is easy to see why his ADP is trending up. On the other hand, Mattison is still a below average athlete that was a compiler at Boise State and a reach for the Vikings in the third round of the NFL Draft. His best ball price is still reasonable if you can get him the late rounds. He should be faded in dynasty and relegated to the waiver wire to start the season in weekly redraft leagues, as his overall profile suggests he will never have a feature back role.

Irv Smith played 25 of the offense’s 29 first half snaps, including three where he lined up in the slot. In that substantial action, he hauled in three of seven targets for 21 receiving yards. He was also running deep routes and barely missed a few big gains. Despite a good showing, Smith is falling because he continues to play behind Kyle Rudolph on the depth chart. Rudolph played every snap with the first unit whereas Smith only played with that unit in heavy personnel groups. Temper expectations for his rookie campaign. This is a clear buying opportunity in dynasty, however, on an above average athlete with second round draft capital that averaged 16.1 (87th-percentile) yards per reception playing with many other elite weapons at Alabama. 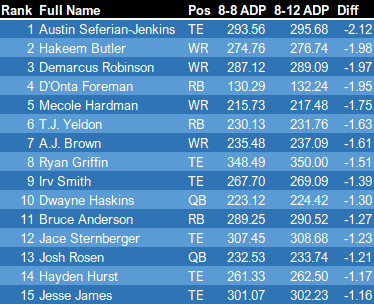 It was a rough outing for Dwayne Haskins in the preseason’s first week. He finished the game 8-14 passing for 117 yards with two interceptions, two sacks and a fumble lost after the catch. Case Keenum did not look much better, and this is only the first preseason game. They will want to see what they have in the first-round rookie by the season’s end. Haskins flashed potential at his last year at Ohio State with an 86.3 (92nd-percentile) QBR and 9.1 (80th-percentile) yards per attempt, which both predict future success. In 2-QB and Superflex formats, he will be a weekly contributor by the end of the year. In dynasty, Haskins is a solid buy at his current price to stash on the bench while he accrues value.

N’Keal Harry did not make the cutoff for the top 15 fallers table above, but is still an interesting case. Maurice Harris and Jakobi Meyers played the most snaps with the second unit and both caught touchdowns. Harry caught passes on both of the passing routes he ran, but only played on three snaps total. He played less because he is not on the roster bubble. Belichick would be stupid not to utilize a difference maker that was dominant in college from a young age, evidenced by a 43.9-percent (88th-percentile) College Dominator Rating and 18.7 (95th-percentile) Breakout Age. Harry also tested with a 98th-percentile 134.5 SPARQ-x score that puts him in elite company. Belichick is fickle, but not stupid. Harry may start out the season in a wide receiver rotation but, when all is said and done, will end up with the third-most targets in New England behind Julian Edelman and James White.