Chris Ivory and T.J. Yeldon and the Value of Team Backfield Drafting

The devout readers of PlayerProfiler.com are well versed in our rationale for a Zero RB drafting plan in the 2016 season.  The volatility and unpredictable nature of the running back position is precisely why drafting wide receivers early will greatly increase the likelihood of a successful fantasy football season.  Yet the fact remains, all fantasy teams need quality running back production to win a championship.  The question that hasn’t been answered yet?

What is the optimal running back draft strategy when following the Zero RB algorithm?

The answer doesn’t lie in specific rounds or players.  It is a much more simple and holistic concept: Team Backfield Drafting.

I examined all relevant running backs from last season and ranked them according to the nine important running back metrics from PlayerProfiler.com. These metrics were selected based on their close correlation to fantasy production.  They were as follows:

Below is a chart of the top 30 running backs ranked using these nine metrics: 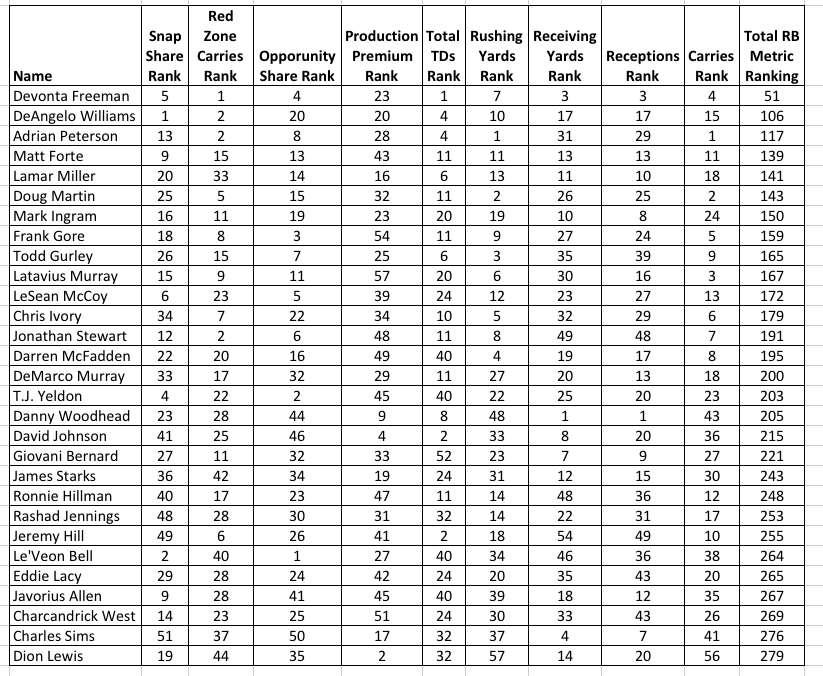 From this list, there are four team backfields that Zero RB proponents should target.  All four require at least two, and sometimes three selections.  The idea becomes that invariably someone becomes the top running back, and by selecting the entire backfield the owner is ready to reap the benefits. Imagine if drafting the Atlanta Falcons backfield last season?  Using a ninth and tenth round pick, a team could have balanced an Antonio Brown, Julio Jones, Brandin Cooks start with Devonta Freeman.  The same could be said for an Arizona Cardinals Chris Johnson/David Johnson late-round pairing as well.  The four team targets below have two commonalities: Great offensive situations and a realistic path to secure the entire backfield on draft day (or waiver wire).

Much like when Eddie Murphy and Dan Akroyd waited until just the right time to buy orange juice shares in Trading Places, once Latavius Murray‘s average draft position (ADP) on MyFantasyLeague has dipped into round five, it became the time to buy.  The Oakland Raiders lead running back had a strong all around sophomore season, ranking third in total carries and sixth in total rushing yards.  Murray was ninth in Red Zone Carries and a solid 15th in snap share.

Latavius Murray brings incredible speed metrics with a 93rd percentile in 40 yard dash time and 96th percentile in Speed Score.  Most importantly?  He is the clear cut top running back on a team with one of the top three offensive lines in the NFL.  Drafting Murray in round four or five allows the Zero RB strategy to be relatively uninterrupted, and DeAndre Washington‘s 134.6 ADP means a minuscule late round cost to handcuff.  Murray finished as the tenth overall fantasy running back in 2015, and rates tenth on the above RB Matrix.  If your team drafts late in round four or early in round five, buying into the Oakland Raiders backfield will provide a security blanket with a very high floor.

Sometimes the situation trumps all, and that is the attraction of the Baltimore Ravens backfield.  Reports indicate that the two top running backs are second year player Javorius Allen and either veteran Justin Forsett or free agent signee Terrance West.

The talent profiles of Ravens running backs are sorted in the inverse of their respective ADPs — the perfect fantasy football buying opportunity.  Justin Forsett is actually the first Ravens running back being drafted in round nine.   The current lead running back favorite, Javorius Allen, is going in round 16, and both free agent signing Terrance West and rookie Kenneth Dixon are going in round 17.   In a Ravens high-powered offense, this is amazing value.  Forsett rarely gets the goal line touches, but still has value with a 77-percent Snap Share, which ranked seventh among relevant fantasy running backs in 2015.

The owners of this backfield simply need to observe the last weeks of preseason to see who grabs the lead role.  RB depth chart ambiguity drives down the cost of all team running backs.  With each back carrying a minimal acquisition cost, it makes sense to monopolize the Marc Trestman backs.  With so much uncertainty surrounding running backs drafted in the middle rounds, the minimal investment for the Baltimore Ravens backfield is sure to pay huge fantasy dividends whle illustrating perfect Zero RB execution.

A very clear backfield situation that can be secured in the mid-late round range of drafts. In a reverse of the Baltimore situation, the goal line running back is being drafted first.  Chris Ivory (ADP 79, RB30), is being selected at the end of round six.  The passing down/two minute drill running back, T.J. Yeldon (ADP 97, RB37), is going just 18 picks later at the beginning of round nine. Both players provide substantial fantasy value.

Chris Ivory ranked sixth in total carries with 266, and fifth in rushing yards with 1,070 last season.  He ranked seventh in Red Zone carries with 39, and 10th in total touchdowns with eight.  Jacksonville struggled to score from inside the five yard line, and that is what Ivory will bring to this team.  Ivory’s monster offseason contract ensures that the Jaguars will use him often throughout the season.  The best part?  His production last year (11th in fantasy points per game with 13.6), came while having a Snap Share of only 49-percent which ranked 58th among all NFL running backs.  Ivory doesn’t need a large load of carries to be productive.

T.J. Yeldon had a quality overall rookie season finishing just behind Chris Ivory with 13.0 fantasy points per game, placing him 13th overall among running backs.  He ranked 21st in receptions with 36, 26th in receiving yards with 279, and 22nd in rushing yards with 740.  All this while finishing seventh in evaded tackles with 78, and 35.8-percent (No. 8) Juke Rate.  Yeldon possesses the metrics, enters his second NFL season, and has a role carved out in a high powered offense. Assuming the Jaguars putrid offensive line play (59.7 rating/31st in NFL) improves, Yeldon has a chance to shine in Point Per Reception (PPR) leagues.  If Ivory were to get injured, Yeldon’s stock would rise dramatically.  All of this for the 37th running back off the board.

The AFC South is not known for having great pass defenses, which will lend itself to high scoring games.  Depending on the matchup, starting both of these running backs could give a high 20-plus point floor total at the running back positions.  By selecting four strong wide receivers in the first five rounds, the Jaguars backfield could provide a fantasy playoffs-bound lottery ticket.

There may be some skepticism to endorsing the backfield from the worst running game in the NFL last season.  In 2015, Detroit ranked last with a total of 1,335 rushing yards.  However, the departure of future Hall of Famer Calvin Johnson forced offensive coordinator Jim Bob Cooter to revamp the offense. This year, the Lions will feature a no-huddle offense, which will open running lanes and create receptions galore.  Given the poor performance last year, the ADPs are very attractive for Detroit’s two main running backs, Ameer Abdullah and Theo Riddick.

Ameer Abdullah underwhelmed in his rookie campaign, but still brings powerful metrics (98th percentile Burst Score and Agility Score) to the field. Abdullah will face the sixth easiest fantasy running back schedule in 2016, and should see an uptick in yards per carry (4.2) and yards per touch (4.6). Abdullah’s main issue is holding onto the football (five fumbles in 2015), but that is exactly what drives his ADP down to the current overall 88th pick.

All Theo Riddick did last year was finish second among all running back in targets (99), receptions (80), and receiving yards (697).  He was third among all running backs in Juke Rate (42.3 percent), and third in Fantasy Points Per Opportunity with 1.27.  A no-huddle offense will cause Riddick to be on the field with Abdullah at times, and will push Riddick close to 90 receptions.  In a tough division, the opportunities that arise when playing from behind should also be frequent.  A PPR stalwart, Riddick presents fantasy value in all formats.

If you draft with the Zero RB plan in mind, you must attempt to find running back consistency later in the draft.  That is much more likely to be found by targeting team backfields rather than haphazard players. Why guess at which mid to late round starting running backs will consistently produce?  Corner the market on two team backfields, and provide your fantasy team with safe and productive options.