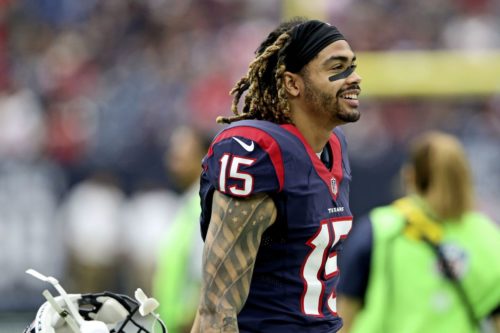 The Week 5 DFS main slate on FanDuel features four high-priced RBs in premium matchups. The key to cashing in these situations is jamming in as many as possible and paying down at other positions. The best way to do this is by identifying “lineup makers.” These cheap DFS options give you the lineup flexibility necessary to afford the best plays on the slate. Here are some lineup makers this week based on advanced stats, metrics and player profiles.

Negative game script is fantasy gold for satellite backs. Washington happens to rank No. 30 in Game Script and has a matchup with the New England Patriots. This will put Chris Thompson on the field in favor of the one-dimensional generational grinder, Adrian Peterson.

Thompson has had an underrated start to the season, ranking No. 2 among RBs in targets and receiving yards. He also averages 8.2 (No. 1 among qualified running backs) Yards Per Touch and has scored double-digit fantasy points in every contest so far. Expect him to get a heavy dose of short targets as the Washington quarterbacks check down early and often.

The Pittsburgh Steelers did some self-scouting and finally saw Jaylen Samuels’ 20.2 (97th-percentile) College Target Share. He received 18 total touches on Monday night and even lined up in the “wildcat” multiple times.

James Conner was limited throughout Week 3 with a knee injury and also picked up an ankle injury in Week 4, putting his availability in question. Even if Conner suits up, Samuels has carved out a significant role with his versatility. The Steelers will continue to feed their running backs to hide Mason Rudolph, giving Samuels a shot at crushing his $5000 salary.

With Christian Kirk out this week, Larry Fitzgerald figures to see a significant increase in targets for the Arizona Cardinals. Fitzgerald plays in the slot 91.1-percent of the time, meaning he will likely spend most of his day seeing journeyman cornerback B.W. Webb. Webb has allowed a perfect 158.3 passer rating on 11 targets this season. With Arizona’s No. 1-ranked pace of play and Fitzgerald’s high Dominator Rating, this matchup will be exploited.

Will Fuller is primed for a bounce-back game against Isaiah Oliver and the Atlanta Falcons secondary. Fuller has elite speed with a 4.32 (99th-percentile) 40-Yard Dash compared to Oliver’s 4.50 (58th-percentile) speed, meaning he will be tested deep early and often.

Fuller has seen plenty of big-play opportunities. His eight deep targets and his 17.1 Average Target Distance both rank top 10 among receivers. The problem is he’s only connected on 162 of a possible 393 Air Yards. Expect that to change this week.

While the QB situation is less than ideal, Robby Anderson draws his best matchup of the season. He predictably struggled while facing Tre’Davious White, Denzel Ward and Stephon Gilmore in his first three matchups. He now takes on the Eagles secondary that allows the most fantasy points to receivers. They will also be down their three best cornerbacks, leaving Sidney Jones and Craig James as starters.

Sam Darnold is also trending towards playing on Sunday, meaning Anderson should see more aggressive downfield targets. We saw him produce three top-5 fantasy performances last season. Look for him to hit his ceiling in this matchup.

Calvin Ridley has been out-snapped and out-targeted by Mohamed Sanu in three games thus far. But Ridley has nearly doubled Sanu’s Average Target Distance (14.0 to 7.7). He also owns a 76.1-percent (No. 60) Snap Share, which is way up from the 65.0-percent (No. 88) mark from his rookie season. This is the signal DFS gamers should be looking for, as Ridley has a high chance to post a big week with this usage.

With Davante Adams struggling with turf toe, Jimmy Graham turns into the best receiving threat for Aaron Rodgers. Adams has seen a 26.1-percent (No. 10) Red Zone Target Share this season, while Graham ranks second on the team with a 21.7-percent Red Zone Target Share. This usage should skyrocket, and Graham has had multi-touchdown upside his entire career.