Without further ado, let’s see what the New York Jets and the Indianapolis Colts have in store for us.

Mike White went nuclear in his last outing against the Bengals, putting on a show with 405 passing yards, 3 touchdowns, and 28.2 (No. 2) fantasy points. He displayed accuracy as well, finishing with an 82.2-percent Completion Percentage. The Bengals are no slouch on the defensive end on the ball, so this was truly an impressive performance. While this is a nice story, the Colts now have film on White and will be much more prepared. The volume alone makes him a low-end QB2 worthy of a start in 2QB leagues. 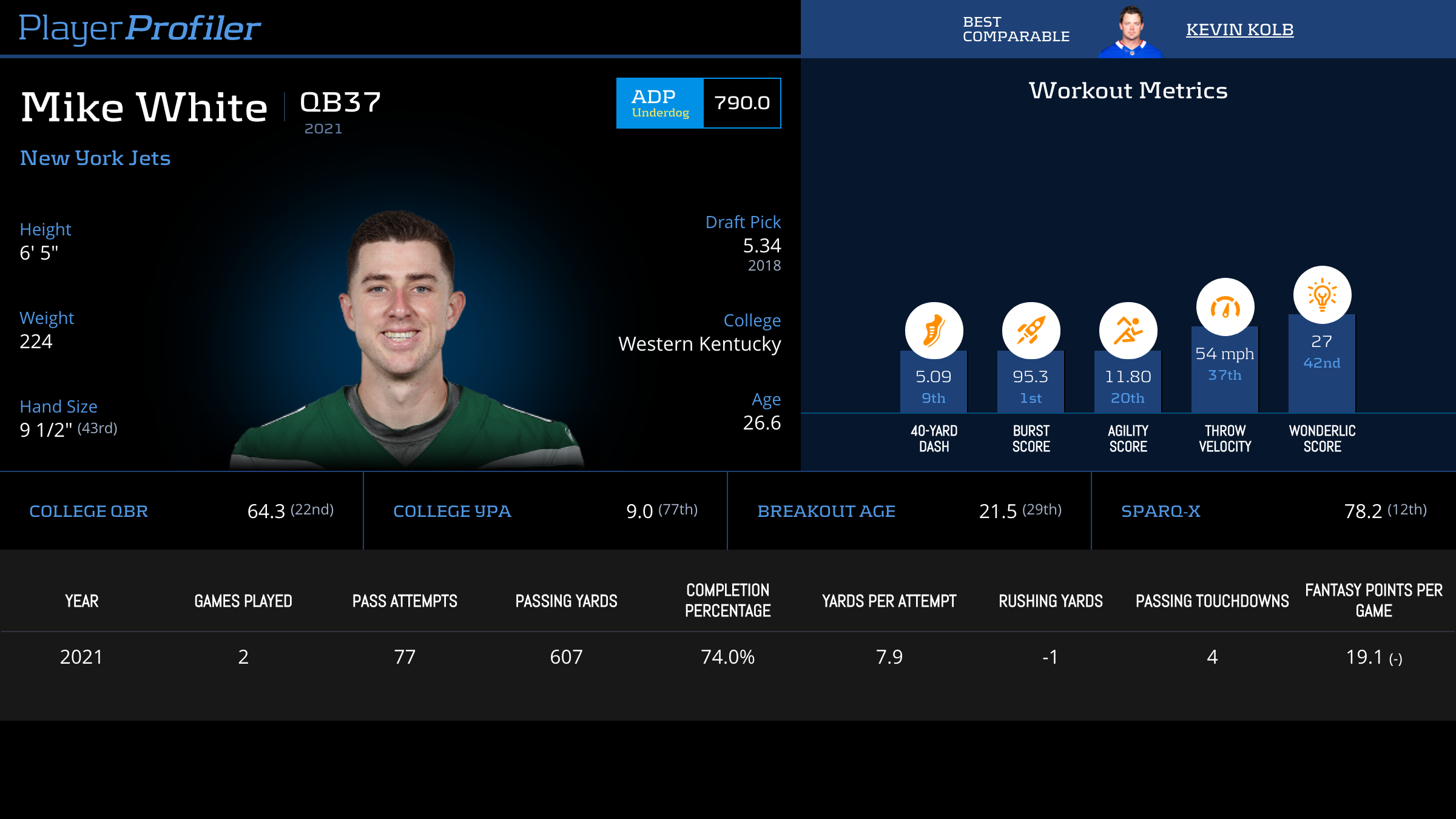 Michael Carter season is here. Carter is coming off of a career high game in all phases. His explosive performance included 15 carries, 9 receptions on 14 targets, 172 total yards, and 32.2 (No. 1) fantasy points. His Snap Share and Routes Run have been trending up all season, and now the breakout game is a notch under the belt. The Colts rank well vs running backs, but the good backs they’ve faced have been able to cut them up. Trust the volume and start Carter

The Jet’s had two (that’s right, two) RB1’s last week. Ty Johnson produced 86 total yards and 19.6 (No. 9) fantasy points on 6 targets and 4 carries. That being said, Johnson’s has finished with under 35-percent Snap Share for the fourth straight game and has only been given more than five carries once. The volume just isn’t there for Johnson, and is likely going to disappoint tonight.

The Vet, The Rookie, and The Ghost

With Corey Davis out, Jamison Crowder led the receiving core with 9 targets and 84 receiving yards. In his four game returned from injury, he’s averaged 7.5 targets per game, 30.3 routes per game, and a 31.8-percent Red Zone Target Share. He’s the safety blanket, which is something Mike White will need in his back pocket in order to succeed. Crowder gets the Flex tag in PPR leagues.

Sunday was a career day for (healthy) Jets’ rookies, with Elijah Moore setting career-highs with 6 receptions and 67 receiving yards. There was a lot of hype surrounding Moore in the offseason, and part of the reason he hasn’t met those expectations is a lack of routes. His 65.4-percent (No. 75) Route Participation, and 14.3 (No. 66) Target Share create an extremely low ceiling. His Snap Share and Routes Run are trending down, not up. No Corey Davis means Elijah Moore will see enough opportunity to earn a Flex spot, but know his ceiling is capped. 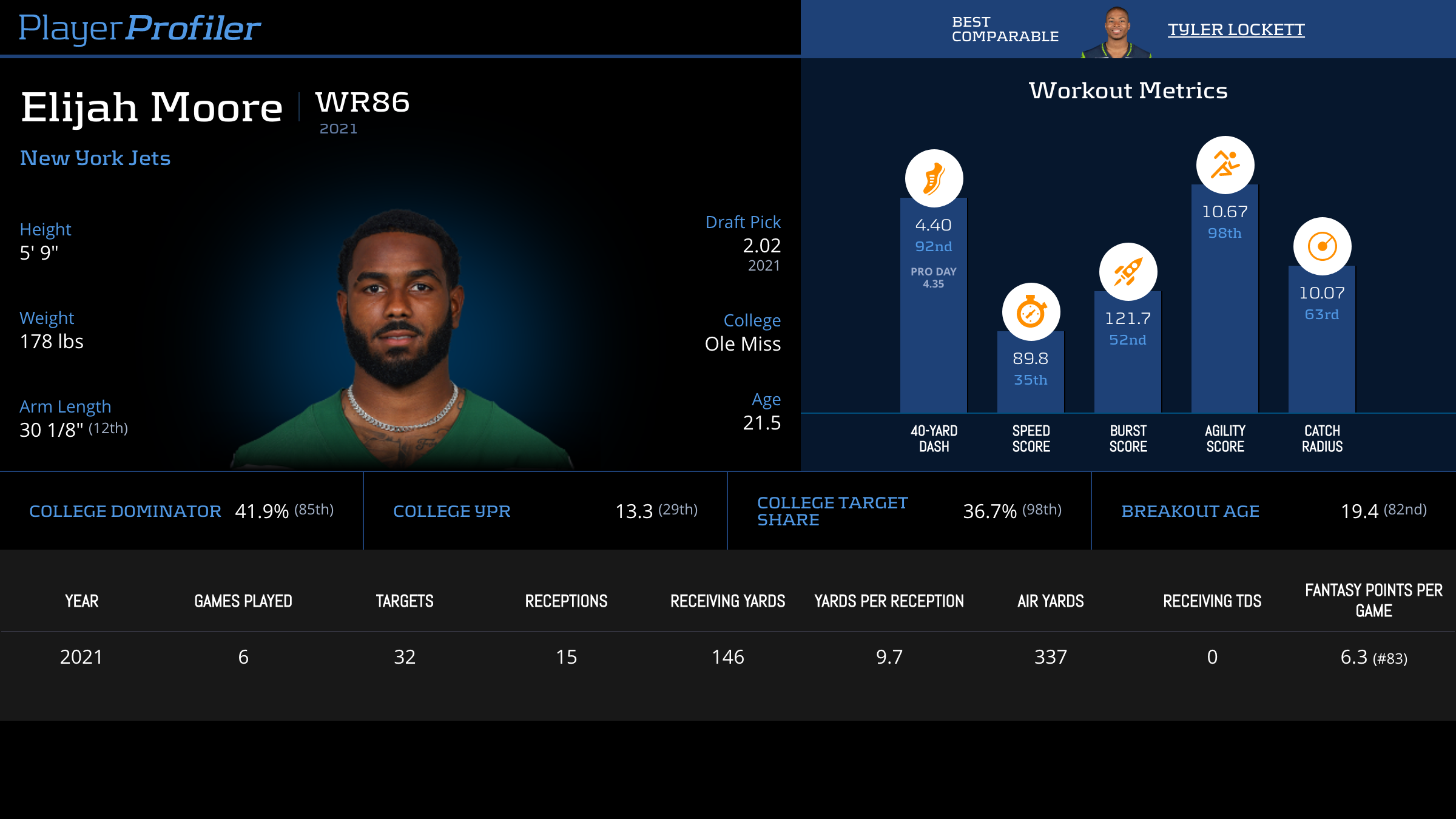 Denzel Mims finally saw real usage on Sunday, earning a 76.7-percent Snap Share and running 32 routes. However, that materialized to only 3 targets, 2 receptions, and 30 receiving yards. He’ll see the field plenty with Corey Davis out again, but at the moment there is still no sign of enough life to plug Mims into lineups.

Carson Wentz isn’t performing extraordinarily well as a fantasy asset, but wow is he consistent. He’s scored between 17 and 23 fantasy points in all but one game this season. For his draft capital, a bonafide mid-to-high QB2 is an ideal outcome. He’s been below average in efficiency, but his pure production numbers are solid. So far he’s racked up 1,926 (No. 16) passing yards and 14 (No. 10) touchdowns. The Jets defense is by no means good, which isn’t all good news for Wentz managers. There is a danger of a heavy run game with an ultra-positive Game Script. Still, the opportunity for production and the floor makes him playable in 2QB leagues.

Jonathan Taylor is being unleashed. Sunday marked five straight games of at least 100 total yards and a top 10 weekly performance, and tonight will make it six.  The Jets give up the most fantasy points to running backs, and the Colts are going to be in a position to run a ton. Taylor is pacing a scorching 6.4 (No. 2) Yards Per Touch and a 57-percent (No. 1) Juke Rate. All of his efficiency metrics are jaw dropping. Not that you needed convincing, but be ready for another nuclear outing from Taylor.

Since JT’s takeover, Nyheim Hines has hardly seen the field. He has a low ceiling and a rock bottom floor. Hines should be kept on the bench.

Michael Pittman is the alpha in Indianapolis. He checks in with an impressive 24.7-percent (No. 19) Target Share, 98.2-percent (No. 4) Route Participation, and 9 (No. 12) Red Zone Targets. This has materialized to 594 (No. 9) receiving yards and 4 (No. 14) touchdowns. He’s churned out a top 10 weekly performance in each of the last two games. He’s not efficient, but he’s productive. Pittman is a must play against a weak secondary.

Zach Pascal has disappeared since having two solid outings to start the season. Whether T.Y. Hilton has been in or out, Pascal has failed to convert on his opportunity and has yet to eclipse 50 receiving yards this season. He’s ran 281 (No. 1) Slot Snaps, but has only seen a 16.3-percent (No. 55) Target Share. On Sunday, Pascal set season highs with a 91.7-percent Snap Share, 47 routes, and eight targets. Against the Jets, he has WR2 upside, but there are plenty of better plays this week.

Mo Alie-Cox has had two games of more than 10 fantasy points, in each of which he scored a touchdown. He’s ran over 20 routes just once, and seen under 5 targets in 7 of 8 games. He’s in a solid spot to score a touchdown tonight. There are better streaming options out there, but Alie-Cox is playable.

Non-Redraft note: Ashton Dulin has a solid prospect profile and could be inching towards a breakout. He’s seen 4 targets in each of the last two games and received 146 Air Yards. He’s starting to play more and has opportunity with T.Y. Hilton and Parris Campbell both hurt. He’s not worth the start tonight, but you should stash Dulin in deep dynasty leagues.

The Jets pulled off the miracle on Sunday, but to win again on the road on a short week is quite the tall order. The Jets are not winning this game. As for the +10.5 point spread for the Jets, I don’t expect them to cover that. Indy has a solid defense that can get to Mike White and put him on the ground. I like the Colts to roll again in front of the home primetime crowd.

The point total is set at 46 points. This is a tough call, but I expect the Jets to be able to move the ball a bit and put some points on the board. I’m running with the Vegas trends and riding with the Over streak.