Justin Jefferson has fallen short of his expectation so far, but he’s still balling. He comes into Week 9 with 43 (No. 12 among qualified wide receivers) receptions, 563 (No. 16) receiving yards and 3 (No. 22) touchdowns. Jefferson and Kirk Cousins have struggled to connect at times, explaining the low touchdown total and his 357 (No. 11) Unrealized Air Yards. He’s currently cemented in the WR2 category, but still has the upside to finish atop the overall rankings. 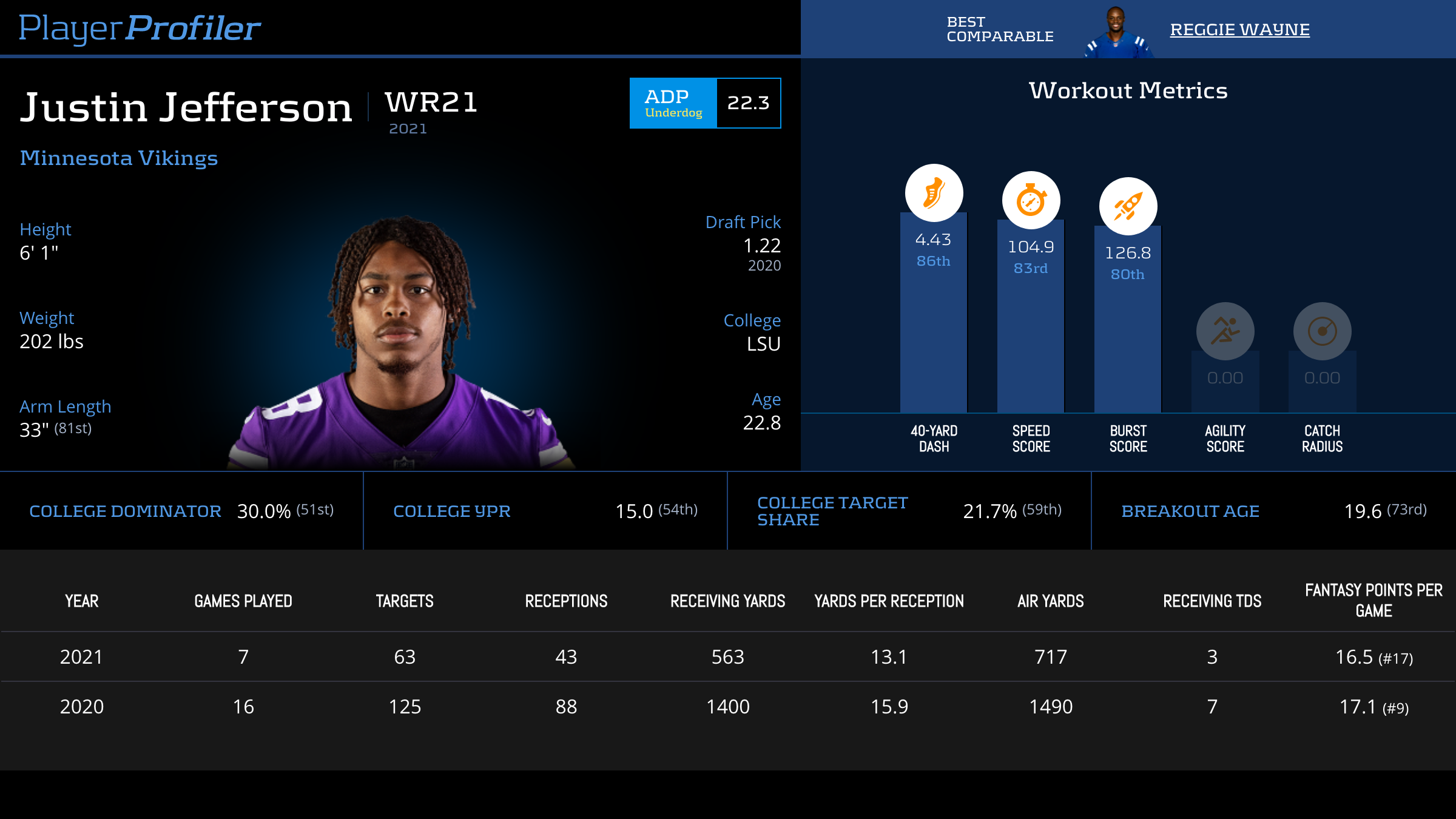 Jefferson has earned a significant share of opportunity, with a 24.6-percent (No. 20) Target Share and a 39.5-percent (No. 10) Air Yards Share. His recent dud against the Cowboys is of no concern. While he saw a season low Snap Share and target totals, he’s going to go right to his normal high target volume if they want to win games. The Vikings have a stretch of games against solid, but beatable, secondaries. Jefferson is a great target for a late season push.

In his first game returned from injury, Jerry Jeudy ran 20 routes, saw a 72-percent Snap Share, and led the team with 4 receptions. It didn’t take him long to get re-acclimated. Jeudy is a smooth route runner and an electric play-maker, one they’ll have to rely on to compete in their next stretch of games.

The Broncos only average 34.8 (No. 18) Team Pass Plays per Game, but nearly all of those targets are going to go to Jeudy, Courtland Sutton, and Noah Fant. Jeudy fits Teddy Bridgewater‘s style of play, and will be targeted heavily going forward. You can take advantage of the small sample size and buy him at his near-lowest value.

And now for this week’s certified, locked and loaded, Fantasy Supermarket BUY OF THE WEEK…

Mike Williams has fallen flat on his face two straight weeks now, and three out of the last four. With the recent struggle of Williams and the Chargers offense as a whole, now is the time to buy. The Chargers average 40.3 (No. 3) Team Pass Plays per Game and face a slew of average-at-best secondaries. Coming off two straight losses, the Bolts are primed for a bounce-back stretch. This is going to involve giving Williams the ball more often.

Williams has posted at least 20 fantasy points every time he’s received more than 5 targets, and has failed to score 5 fantasy points in all three games where he’s seen 5 or fewer targets. We all know what he has the capability to do when he’s fed, but his recent slump is the perfect time to pounce on managers who have lost faith in the fifth-year breakout receiver. Get him now.