Without further ado, let’s what the Bears and Steelers have in store for us this week.

Justin Fields and a Murky Backfield

Justin Fields was unleashed last week. In a sluggish game, the Konami-code rookie threw for 175 passing yards and 103 rushing yards in a top 5 fantasy performance. Despite averaging 5.5 (No. 7 among qualified quarterbacks) carries per game, this is the first game where Fields has exploded through the ground. He has been pushing the ball downfield, averaging 9.8 (No. 2) Air Yards per Attempt, and Pittsburgh has been susceptible to big plays. He should be started as a QB2 tonight.

Khalil Herbert has made a statement as the temporary starter, averaging 13.45 fantasy points over the last four weeks. He totaled 78 carries, 10 targets, and two games over 100 total yards. The sixth-round draft pick has performed well, albeit with low efficiency metrics. If David Montgomery returns, then Herbert is downgraded to a low-end flex play. 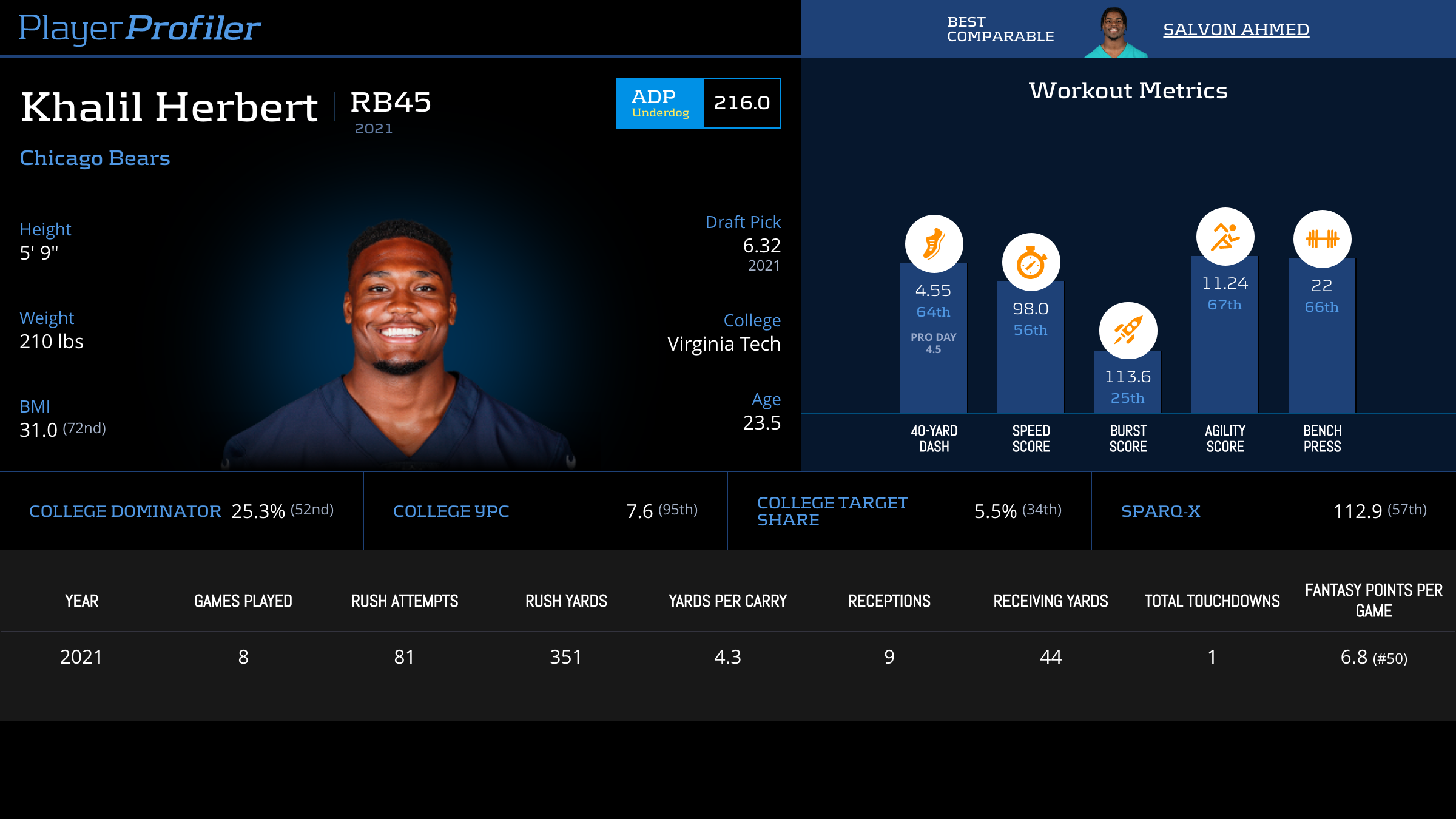 David Montgomery is likely set to return to action tonight, and step into 29.6 (No. 7) Team Run Plays per Game. Montgomery was a true bell cow when healthy, earning a 72.9-percent (No. 6) Opportunity Share and 52.5-percent (No. 9) Route Participation. If you’ve already held through Sunday with Montgomery in your lineup, you don’t have many options if he sits.

It’s been a rough season for Allen Robinson. He and the Bears quarterbacks have been on completely different pages. Robinson only averages 5.5 targets per game. He’s been completely misused, currently being given an 84.7-percent (No. 28) Snap Share and a 29.5-percent (No. 35) Air Yards Share. At this point, he’s a sit until he shows any sign of turning this slump around.

Darnell Mooney has been the playmaker of this receiving core. He’s been a favorite of Justin Fields, earning a 26.1-percent (No. 13) Target Share, 98.3-percent (No. 13) Route Participation, and a 27.2-percent (No. 20) Target Rate. The production has been spotty; he’s only finished as a top 30 receiver in three out of eight games. Mooney draws a tough matchup against Joe Haden, and is a low end flex play.

Tight ends in this offense don’t score often, but Cole Kmet is the leader of the pack. He’s seen 5 targets in each of the last three games. He’s earned a 17.7-percent (No. 8) Target Share, but has had trouble materializing the opportunity into production. Kmet is a sit this week.

Out With The Old, In With The Najee

Death, Taxes, and Najee Harris. He’s been automatic this season, dominating backfield opportunity. Harris gathers 153.7 (No. 2) Weighted Opportunities, 22 (No. 12) Red Zone Carries, and a 18.4-percent (No. 3) Target Share. The efficiency hasn’t been there, but the amount of opportunity has overshadowed it. He’s the RB2 on the season and an auto-start versus a middle-of-the-road Bears rush defense.

Diontae Johnson deserves a better quarterback. Johnson comes in with a 30.0-percent (No. 4) Target Share and a 19.1-percent (No. 8) Hog Rate. He scores 18.0 (No. 11) Fantasy Points per Game, but a 4.95 (No. 64) Target Quality Rating has held him back from further dominance. While Jaylon Johnson could be a tough matchup, Diontae is an auto-start in PPR leagues.

The magic of 2020 Chase Claypool has faded. He has only finished with at least 15 fantasy points in two games. Claypools’s seen a healthy Target Share, but only has 403 (No. 38) receiving yards and 1 (No. 64) touchdowns. His efficiency and his connection with Big Ben are poor, but with a solid matchup versus Kindle Vildor, I expect him to have a decent night. Slide him into your flex.

The injury to Eric Ebron has paved the road to the breakout of Pat Freiermuth. He’s had 7 targets, an 18.92-percent Target Share, and two straight top 10 finishes in each of the last two games. He runs short routes over the middle and is a safety net for Big Ben. The athletic, red zone threat is a viable streaming option.

The Bears and Steelers are both not very good. I expect this to be a close game. Although Matt Nagy is returning, I expect the Bears offense to continue to improve little-by-little. Justin Fields has the ability to move the ball and Pittsburgh has a beatable defense. On the other side, the Bears defense has been average and Pittsburgh has shown the ability to move the ball at times. I think Chicago wins this game outright, and will take their spread at +7 points.

A total of 39 points is fair, but low. Both offense are sluggish and have a tendency to fail to produce points. However, 40 points is a low bar for two teams who can move the ball and struggle to stop opponents. I’ll fade the public with this one and take the over.