Without further ado, let’s get into the NFC West grudge match between the Rams and the Cardinals.

Matthew Stafford is finding success in his new home. He’s torching secondaries with 25 (No. 6 among qualified quarterbacks) Money Throws and a 97.0 (No. 9) True Passer Rating. In his last matchup against Arizona, Stafford had an average day in a disappointing loss. At this point, he is a weekly start.

Sony Michel appears to have usurped Darrell Henderson as the lead back in LA. After missing Week 13 with a thigh injury, Henderson has landed on the COVID-19 list and will remain sidelined. Last week, Michel posted 129 total yards and 21.9 (No. 7) fantasy points on a 97.0-percent Snap Share. He is now a weekly top-15 play for the rest of the season. 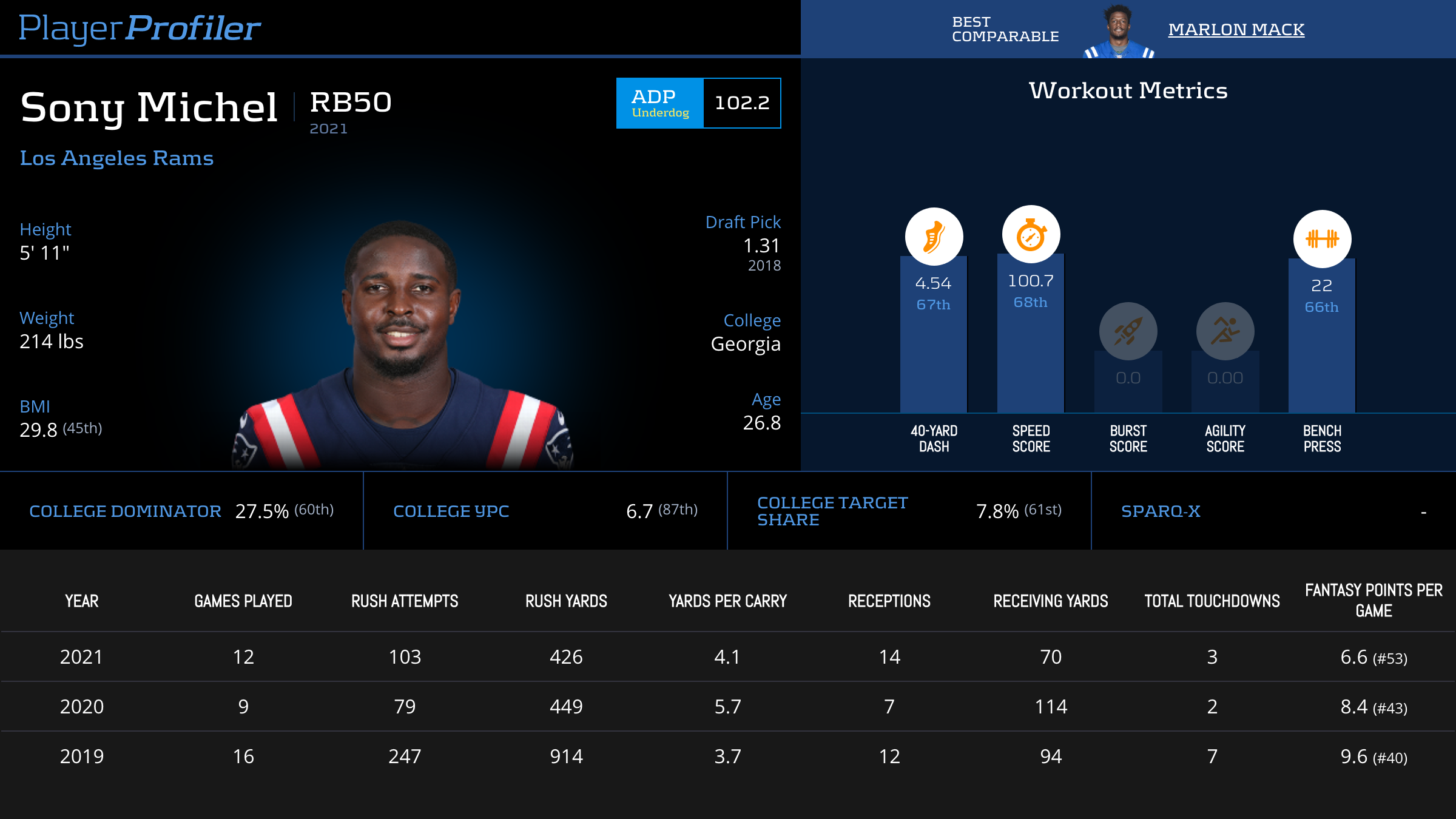 He’s seeing surreal opportunity shares and is the most consistent receiver in fantasy. However, the last time he went up against PlayerProfiler’s No. 4-ranked CB Byron Murphy, he put up a dud. Nevertheless, trust the talent and opportunity to rise above.

Odell Beckham is back. Despite a disappointing stat-line last week, he scored and saw 5 targets in a blowout. In his second game with the team, he saw 10 targets and scored 19.1 (No. 9) fantasy points. His success hasn’t slowed down the Van Jefferson train, either, as he has seen an uptick in targets since Beckham’s arrival. Both receivers have beneficial matchups and have positive outlooks tonight. 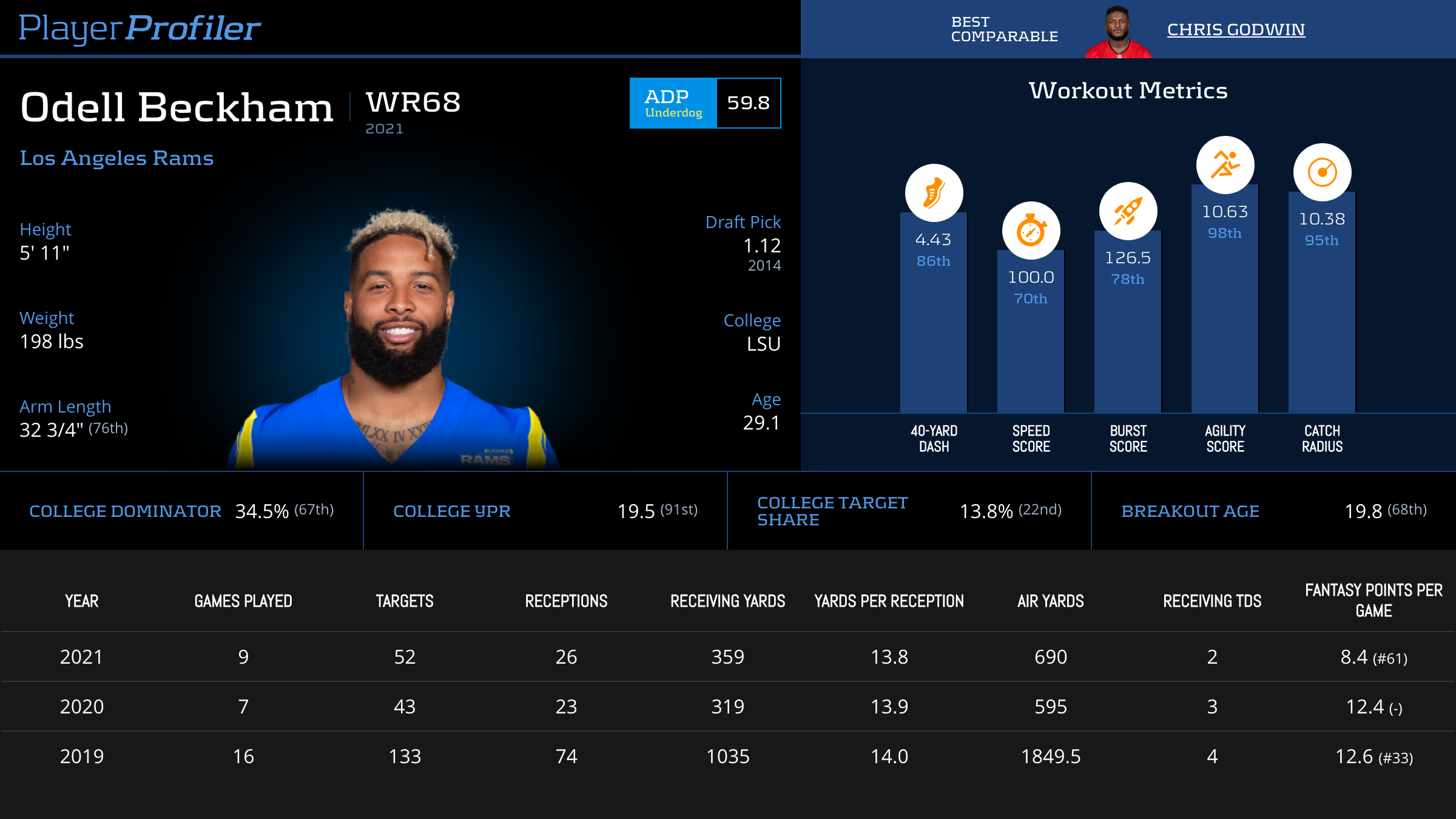 Scoring 8.5 (No. 18) Fantasy Points per Game, Tyler Higbee is a viable streaming option. He doesn’t have an elite Target Share, but he runs a high percentage of routes and has seen 16 (No. 1) Red Zone Targets. Against a stout Cardinals defense, Higbee is a low-upside option.

Kyler Murray didn’t lose a step during his injury stint, coming back and putting up 4 total touchdowns and 30.8 (No. 1) fantasy points. The fantasy QB1 has earned his status through efficiency, with a 116.7 (No. 1) True Passer Rating and 0.74 Fantasy Points per Dropback. He’s an elite play against any defense.

Chase Edmonds is a game-time decision, making James Conner the workhorse back in Arizona for another week.

He’s been dominant without Edmonds, racking up 23.93 Fantasy Points per Game. He’s also found pay-dirt in each of the last six games and nine total times. Conner is a top-15 play against a team he’s already scored twice against.

In contrast to his quarterback, DeAndre Hopkins was brought back slowly. His 71.2-percent Snap Share, 11 routes, and 2 targets are the lowest counts he’s seen this season. It’s tough to say how involved Hopkins will be, but with another week of rest under his belt and a matchup against No. 32-ranked CB Darious Williams, he’s a viable flex play.

Christian Kirk has been the only other playable wide receiver on this team outside of Hopkins. While his 11.6 (No. 35) Fantasy Points per Game is underwhelming, he’s been efficient with 2.18 (No. 12) Fantasy Points per Target. Kirk will draw Jalen Ramsey, the man at the top of the cornerback rankings, for the majority of snaps. This drops his projection, but he is still the WR2 in this offense. 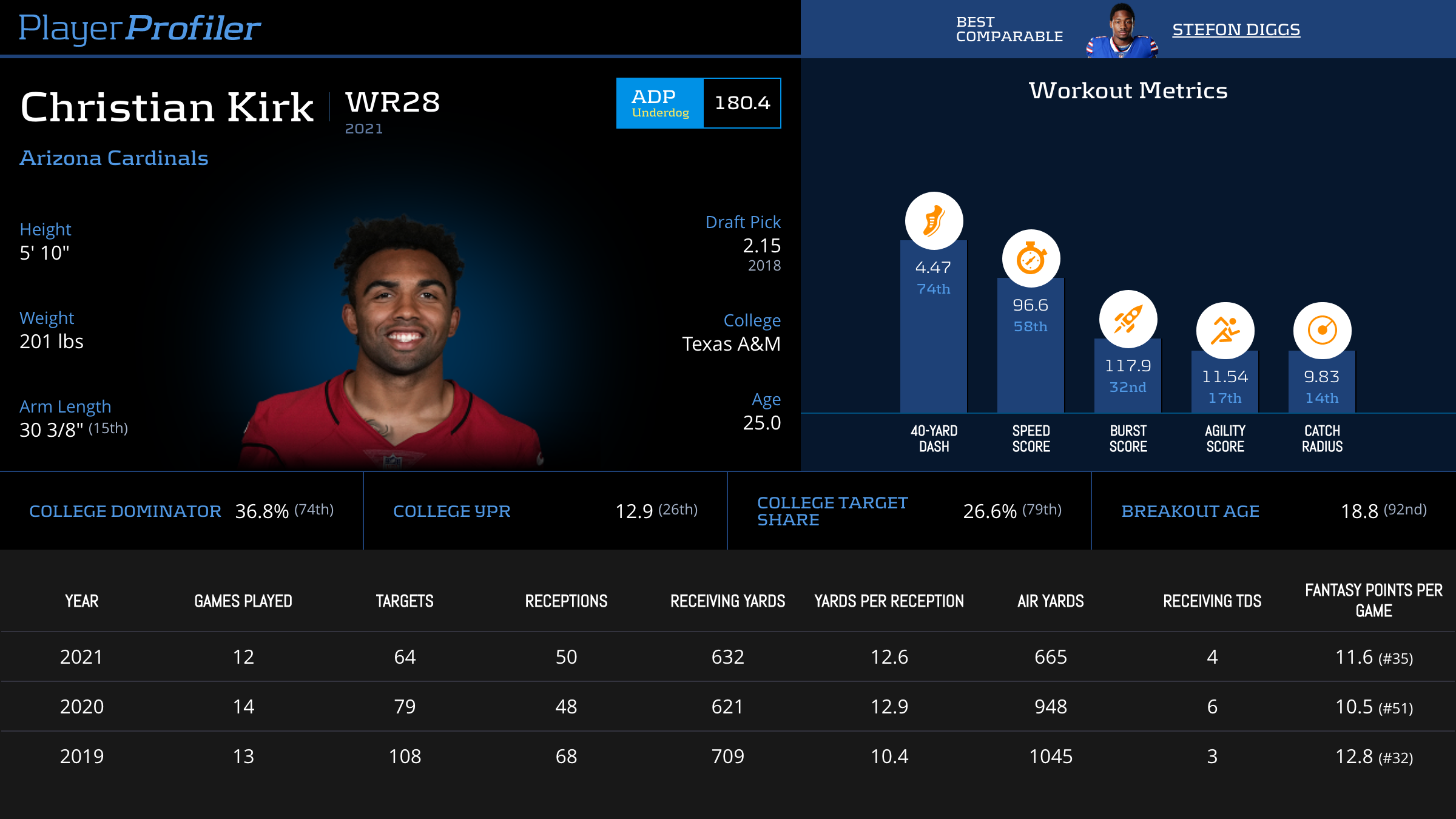 Zach Ertz has been heavily involved in the passing game since arriving, but it hadn’t led to much production until Week 11, where he put up 28.8 (No. 1) fantasy points. He’ll see plenty of opportunity and is a weekly play as he gains chemistry with his quarterback.

The point total is set at a whopping 51.5 points. The first matchup was a grudge match and I expect the same here. However, I expect this game to be much higher scoring this time around. The Cardinals are going to have to score to keep up with LA, and by proxy this game is going to shootout. The NFC West hasn’t been giving us as many dramatic shootouts as we’ve hoped, but we’ll finally get one tonight. I’m taking the over.