One of the longest-standing rivalries in Professional Football is affectionately referred to as THE BORDER BATTLE. The Green Bay Packers are heading into Minnesota to face the Vikings with both teams coming off wins in week 10. Opening at a decent total of 50 points with Green Bay being 2.5 road favorites we need to really dig in here to see if this is one of the games of the week we want to focus on from a fantasy standpoint.

Minnesota does have significant home and road splits in the Mike Zimmer era. With an asterisk for 2020 when fans weren’t in the stands in 2017-2019 Minnesota has been giving up 21.25 points per game on the road while in those home games they gave up 16.08 PPG.

For 2021, they’ve played an equal four home and road games and the split is even more pronounced at 30.75PPG on the road vs. 17PPG at home. Obviously, a smaller sample size but the point is to illustrate both historically and currently it appears that Homefield matters for the Vikings. In terms of their offensive scoring, there is no noticeable difference between home and road in the Zimmer era.

At this point, everyone knows Minnesota has a very concentrated offense. Dalvin Cook, Adam Thielen, and Justin Jefferson are the key fantasy producers with Kirk Cousins captaining the ship. Cook has been slow coming back from injury, but had a season-high 27 touches last week and was able to find the endzone for the first time since Week 3. I don’t like this matchup for him and would look elsewhere if you’re spending up at running back in DFS. After rumblings about Jefferson needing to get the ball more, he is coming off a nine-target, 11-reception game and his highest Target Share of the year at 31-percent.

Thielen remains a steady option and has done the most damage in the six of nine games he has scored a touchdown. In DFS my preferred play out of the bunch would be Jefferson.

Defense, defense, and more defense. Who would have thought Green Bay might have a great defense when the season started. They’re coming off a shutout of Seattle last week and has allowed the third-fewest points per game in the league at 18.0. Overall their games have combined to stay just under an average of 40PPG this season.  When looking at the advanced stats their DVOA is closer to the middle of the pack at No. 11, but their ProFootballFocus Grade comes in at No. 4 overall. Green Bay’s offense struggled a bit last week coming off the Aaron Rodgers COVID stint with him throwing for a decent 292 yards but no touchdowns and one interception. Green Bay and Rodgers have had their fair share of struggles in Minnesota in recent years but it’s hard not to like them in this game.

Aaron Jones is out this week so we get A.J. Dillon as the primary back. He had 21 carries for 66 yards and two TDs last week with Jones going down mid-game. In season-long, you’ll be firing him up. Before digging into the stats, my gut told me to be hesitant to use Dillon in DFS as the sites have priced him up at $7,000 on FanDuel and $6,200 on DraftKings. Digging in, his efficiency stats are mediocre. He averages a solid 3.5 (No. 13 among qualified running backs) Yards Created Per Touch, but 4.2 (No. 31) True Yards Per Carry. 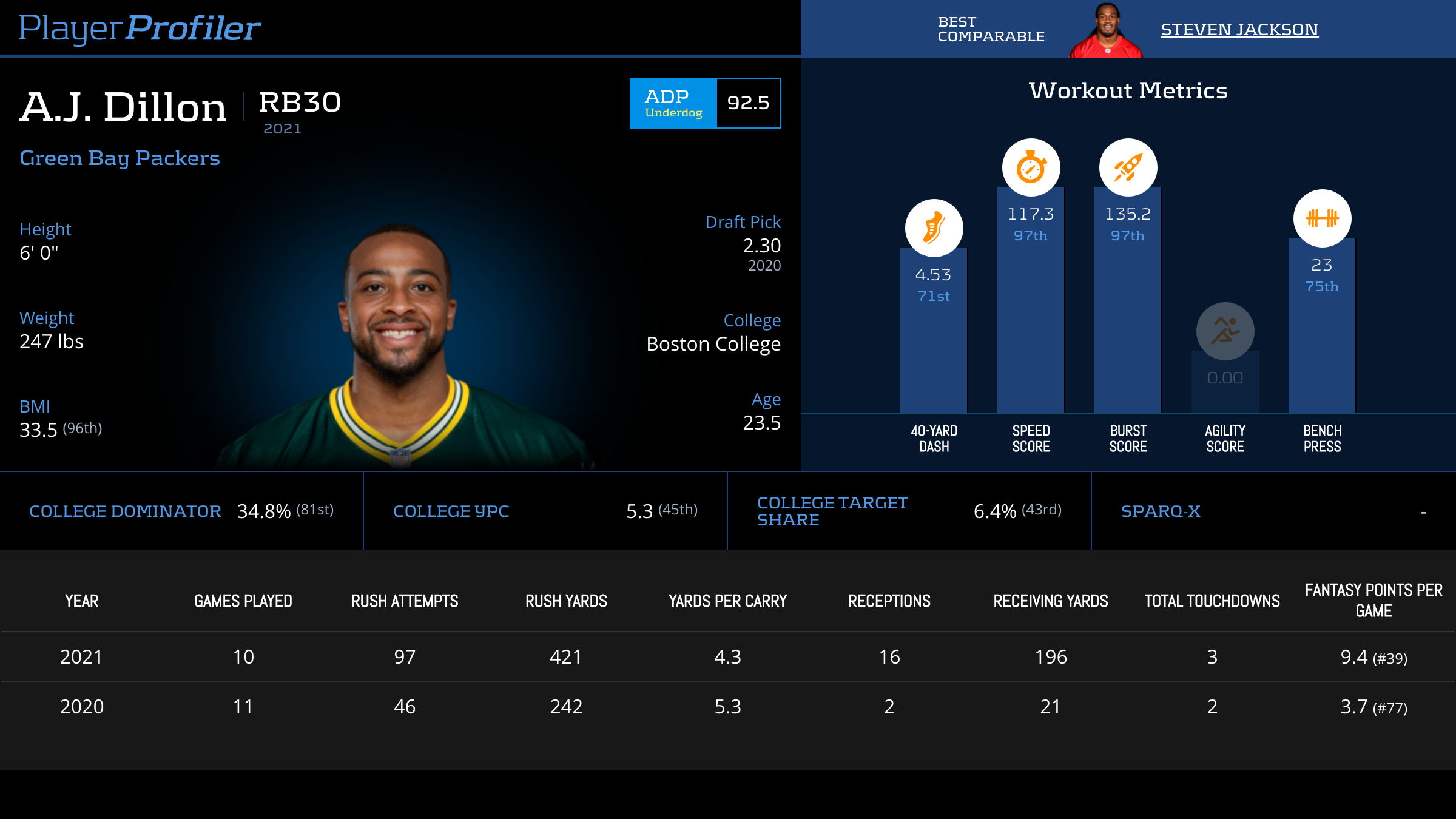 The big thing is the volume he will get.

He already was getting a solid 8.6 (No. 34) Weighted Opportunities Per Game, but will also pick up the majority of Jones’s 14.8 WOPG with him out. The current leader in WOPG is Najee Harris at 21.5 WOPG, and although Dillion won’t get 100-percent of the combined 23.4 WOPG, he is in line for a massive Opportunity Share. The Packers are clearly worried about the depth behind Dillon as they were working out a few running backs during the week that have been around the block.

With Aaron Jones (knee) expected to miss a week or two, the Packers worked out former Lions running back Kerryon Johnson.

Minnesota does seem more susceptible to the run coming in at No. 28 in DVOA against the run and No. 30 in Yards Per Carry at 4.7.

With all that in mind, I think you must get at least some exposure to Dillion in GPPs and I would look to our DFS Optimizer to see if it is spitting him out for cash games.

Davante Adams is my top play in the game. Even if the Vikings do get Patrick Peterson back this week.

I just don’t see their defense being able to keep him contained. His 22.7-percent Hog Rate, 34.6-percent Target Share, and 39.8-percent Target Rate are all No. 1 in the league. His touchdowns are down this year at only three, but I see him getting in the endzone in this game. Allen Lazard is doubtful but I still won’t be looking to any other pass-catching options on the Packers.

Early in the week, I pegged this game to go under and was able to lock in a bet at 49.5. It’s not surprising that it has been bet down considering all the trends point under. I would look elsewhere for a shootout as the probability tilts toward a lower-scoring affair. The line movement for the Vikings is a bit surprising. That may be spawned from the fact Aaron Rodgers and Davante Adams have missed practices this week but both will play Sunday. Minnesota has had a duel personality this year and we don’t know which team we are going to get but I lean the Packers in this Sunday’s game. If bad Minnesota shows up the Packers will cruise to victory. If good Minnesota shows up the Packers still have outs as they’ve shown they can contend with the best in the league.

DFS: The one-shot I would take here would be a Rodgers-Dillon-Adams Stack with a Justin Jefferson runback. This would be a large field GPP play only and you can play chalk around it as it will be unique. Other than that I would be ok with one off’s on Adams, Dillon, and Jefferson.

Patrick Taylor trending player on PlayerProfiler.com, but I wouldn’t touch him with a 10-foot pole.