Back to Basics: Michael Carter is a League Winner 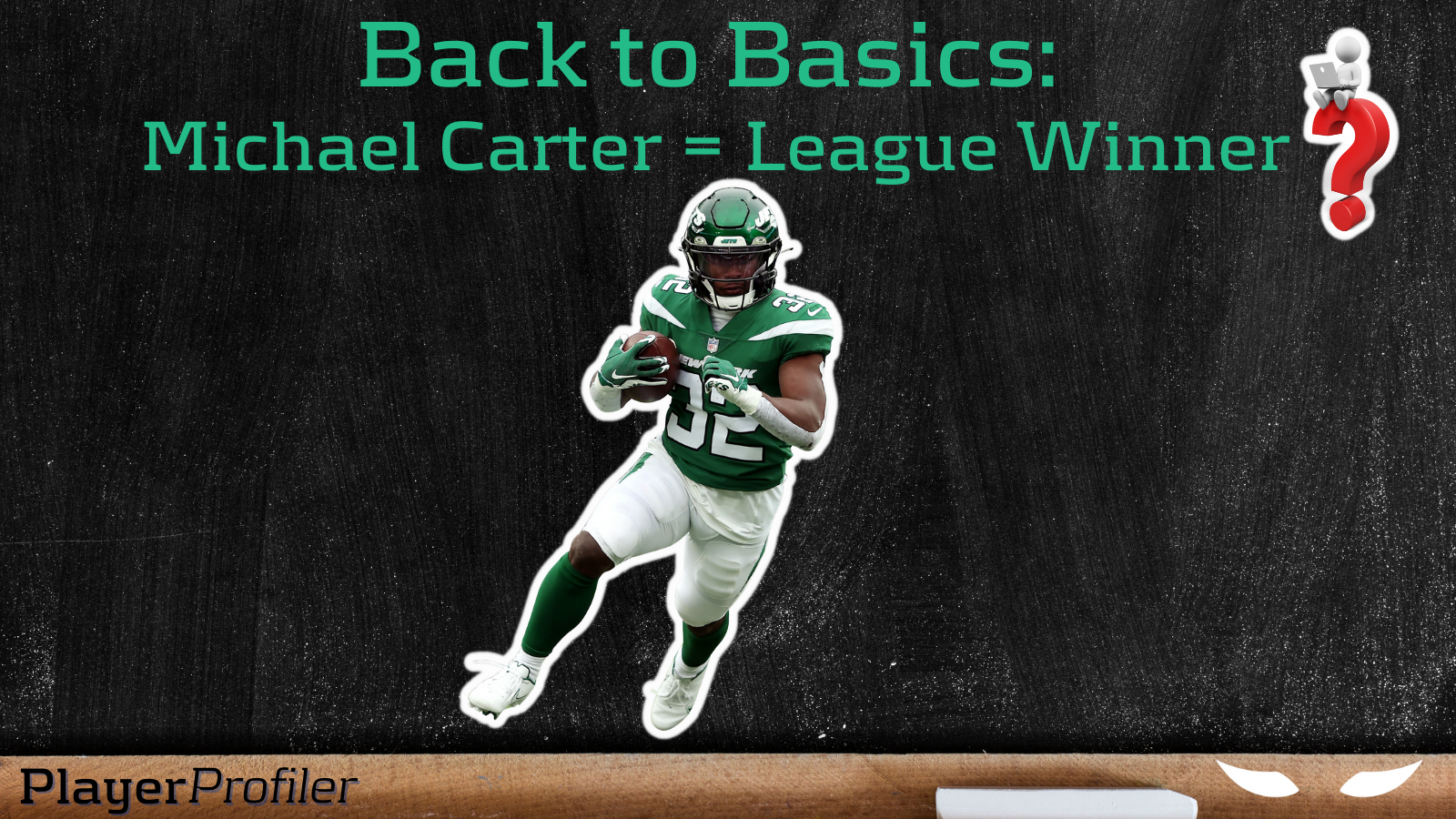 Michael Carter is a 2021 fantasy football league winner. He had his coming out party in a surprise win against the Bengals, where the awful Jets had to turn the reins of the team over to four-year practice squad quarterback Mike White making his first NFL start and second NFL appearance. With little experience, he became captain check down and found both Carter and Ty Johnson for 9 receptions on 14 targets and 95 yards and 5 receptions on 6 targets for 71 yards, respectively. Carter also added 15 carries for 77 yards and a touchdown as well, which led to a total of 21 touches for 172 yards.

This should not be written off as a fluke performance but rather a look into what his ceiling can be.

Although he was a let down in Week 9 against the Colts, this can be attributed to a game that got out of hand quickly. The Colts put up big numbers early and the Jets had to turn to Josh Johnson, after losing White to injury, to finish the game who had no interest in checking down to his running backs. In Week 10 against the Bills, Carter did rebound nicely. He saw an uptick in targets and carries, which resulted in seven more touches than he had in the previous week. He did see his Snap Share decrease due to Tevin Coleman coming back, however, this was to give Carter a few breathers as Coleman was mixed into series rather than commanding a series to himself.

Over the last several weeks, there has been a steady increase in Michael Carter‘s routes run and Snap Share, which says that the Jets are beginning to use him as a bell cow, a role that will expand as the season progresses and as he gets more experience.

He is doing all of this while supporting an aDOT of 0.6 yards, which is ideal for a running back that is being force fed check down passes. His fellow running backs Tevin Coleman, who was already a non-factor before his injury, and Ty Johnson, shouldn’t stand in his way.

Johnson is a third year running back who is a decent change of pace option that will eat into some of Carter’s production, but has also seen his Snap Share decreased to an average of 33-percent Weeks 4-10, down from a Snap Share of 49.5 percent Weeks 1-3 as shown below.

The Jets are an abysmal team and will continue to find themselves in negative Game Scripts, which will lead to more targets for Michael Carter in the passing game. Mike White is currently only averaging 6.5 Air Yards per Attempt, which is ideal for a QB that’s going to check it down to RBs all the time. As for Zach Wilson, he is averaging 8.7 Air Yards per Attempt, but he only has a 57.5-percent Completion Percentage, and a paltry 27.9-percent (No. 35 among qualified quarterbacks) Pressured Completion Percentage.

This is a recipe for a quarterback that has struggled and coming off of a right leg PCL strain to check the ball down more to his running backs to avoid further injury and or embarrassment.

As of Week 11 Joe Flacco has been named the starting QB for the Jets. At first glance this could hinder Carter’s Target Share, however, the last time Flacco played close to a full season of football, he only averaged 7.1 Air Yards per Attempt. This was No. 30 in the league in 2019. Carter should continue to feast.

The main reason Flacco is starting according to the Jets, is that they feel that he can pick up Miami’s blitz packages well. If he is going to be under duress, a veteran quarterback should realize that trying to throw it deep is a lost cause and that checking down to his running backs is more efficient. Data shows that in 2019 while Flacco was on the Broncos, Phillip Lindsay and Royce Freeman had a combined 65 targets while Flacco was under center, as opposed to a combined 33 targets after Drew Lock and Brandon Allen took over after Week 9.

This alleviates any fears about starting Michael Carter against these teams. Tampa Bay is the worst in the league defending the short pass, and with Tampa Bay having the division locked up by that point, they’ll be playing their reserves in a non important Week 17 game, just in time for fantasy championship week.

The 2-13 Jaguars will be packing it in and going through the motions, while Urban Meyer packs his bags for college Week 16. In Week 15, they have their second game against the Dolphins, who will also be struggling, and they just so happen to be ranked No. 29 in the league in short pass completions. As for the Saints, they are a middle of the pack in this metric at #18, but they operate the same way as the Bucs in terms of run defense. They will not give up yards if you run it up the gut, but if you get running backs in space you have success. The Saints defense gave up receiving lines of 5/65/0, 5/74/1, and 6/126 to Christian McCaffrey, Saquon Barkley, and Cordarrelle Patterson, respectively.

If you didn’t draft Michael Carter, it might be too late to trade for him. However, he had an okay game against the Colts and Bills, so you still have a chance to buy. When that time comes, ask for him as a sweetener in a deal for another buy low target. You want Carter on your roster. Go out and get him, and go win some leagues.