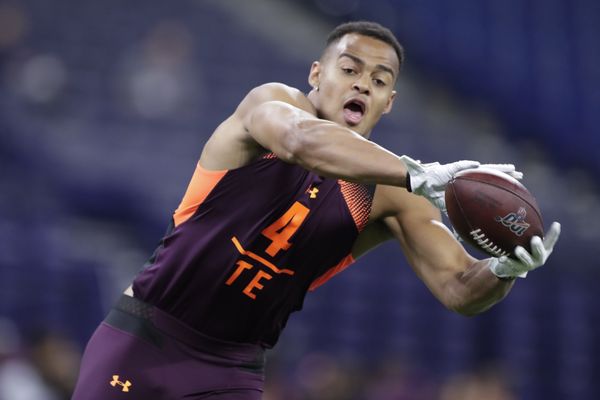 The 2019 NFL Draft tight end class had their chance to impress the scouts and NFL evaluators in Indianapolis this past weekend. For the most part, they did just that. Some NFL teams will be adding seriously athletic players to their roster this coming draft day. With that in mind, let’s look at the five tight ends who benefitted the most from their weekend in Indy based on advanced stats, metrics, and analytics profile.

It doesn’t happen often, but sometimes things actually do deliver all that they promised. Whether it be the latest single from (insert popular musician here) or the meal that you looked forward to eating all day, just occasionally good things that we expect to happen actually happen. Noah Fant‘s performance at the NFL Scouting Combine was one such instance. Fant’s freakish athletic traits were known to some way back in August, but he made sure everyone who watched him this weekend was aware of them.

Fant was No.1 among the tight ends in the vertical jump, the 40-yard dash, the broad jump, and the 3-cone drill. The 4.50 40 is tied for the seventh fastest by a tight end since 2000. His 128.8 SPARQ-x Score also led the pack and saw him placed in the 94th-percentile. Fant’s deeds in Indianapolis have surely secured his being one of the first tight ends to be taken in April, with Daniel Jeremiah mocking him to the Green Bay Packers at 12 in his latest mock draft.

Catching passes is not something that Foster Moreau did an awful lot of during his time at LSU. His four seasons with the Tigers saw him garner a grand total of 52 receptions. His 12.3 percent College Dominator Rating is in the 29th percentile. He did produce the third highest passer rating for his quarterbacks when targeted last year, however. Still, he needed a strong weekend to put his name out there for the masses, and it’s fair to say he managed this quite admirably.

Moreau was No.4 among tight ends in the broad jump with 121, while also posting the 3rd highest vertical jump with 36.5. Moreau actually led the position in the short shuttle and bench press, on his way to a SPARQ-x Score of 127. That be 92nd-percentile air Moreau is breathing. It’ll be his blocking skills that he will be drafted, ultimately. Moreau has shown that he won’t be a mere block of granite when on the field.

I would dearly love to know what they are feeding their tight ends at Iowa. After George Kittle‘s success in his first two NFL seasons, the Hawkeyes had Fant and T.J. Hockenson starring at the Combine over the weekend. Hockenson won the 2018 John Mackey Award, and a strong showing for the scouts would be certain to cement his place at the very top of his position group. Like Fant, he did very little to damage his reputation.

Hockenson’s speed was not overly impressive, posting the 4.70 (71st-percentile) 40-yard dash time. However, this was a rare blip on an otherwise sterling weekend. Hockenson was No. 2 among the tight ends in the vertical jump, broad jump, short shuttle, and the 3-cone. Hockenson’s closest comparable player according to PlayerProfiler is Ian Thomas, which this author likes very much. Thomas is a player that I hope people don’t forget about in dynasty drafts this season, by the way. Hockenson was classed as the “safest player in the whole draft” by Jeremiah prior to the Combine, and the deeds of Fant shouldn’t overshadow him too much. Just because we adore the moon doesn’t mean we should ignore the stars.

Kahale Warring was a player that most casual fans might not have been too familiar with prior to the Combine. Pass catchers on the San Diego State Aztecs tend to play second fiddle to the ground game, which is all the more notable when one remembers that two Aztec running backs have rushed for more than 2000 yards in two of the last three seasons. Namely Donnel Pumphrey and Rashaad Penny. Still, Warring posted in the 60th-percentile with his College Dominator Rating of 19.6 percent this past season.

Warring put up decent numbers over the weekend, placing among the top four in the vertical jump, the broad jump and the short shuttle. He also demonstrated impressive speed with a 4.67 40-yard dash, the fourth fastest of the whole combine. Warring’s SPARQ-x Score, 116.2, which ranked No. 4 among the group. If people hadn’t heard of him before his time in Indianapolis, they certainly have now.

Hype would be a word I’d use in describing the footballing output of Alize Mack since his high school days. Mack was heavily recruited prior to signing on with the Notre Dame Fighting Irish. But his college career produced only 68 receptions for 716 yards, at a pitiful 10.5 yards per reception. He also scored a mere four touchdowns. Mack needed a solid showing at the Combine to jog memories of happier times.

While not an outstanding weekends work, Mack was far from a disaster. He posted the third highest SPARQ-x Score of the weekend with 116.7 while finishing the 5th highest vertical and broad jumps. Mack’s 4.70 40-yard dash is nothing special. But it contributed to a good all-around showing by Mack. Mack will be a name to watch as the draft moves into its second day.