Sony Michel may have lucked out with a touchdown, but it’s the Darrell Henderson show in the backfield of the Rams. Henderson is running away with a vast majority of the opportunity, with a 73.7-percent (No. 8 among qualified running backs) Opportunity Share and a 59.0-percent (No. 4) Route Participation.

Receiving opportunities is worthless if they aren’t touches that create worthwhile fantasy production. This isn’t a problem for Henderson, whose 56.5 (No. 25) Weighted Opportunities have paved the road to his fantasy success thus far. He checks in at 16.3 (No. 13) Fantasy Points Per Game, just outside of the RB1 threshold, and has a cake-walk schedule coming up. The stars are aligning for the Cam Akers fill-in.

Tee Higgins is a prime buy-low candidate after a sluggish start to the season and missing Weeks 4 and 5 with a shoulder injury. In his return to action, he was the second-most targeted receiver on the team. It’s comforting to know that he’s still undoubtedly the number two option after giving Tyler Boyd two weeks to see a larger role. 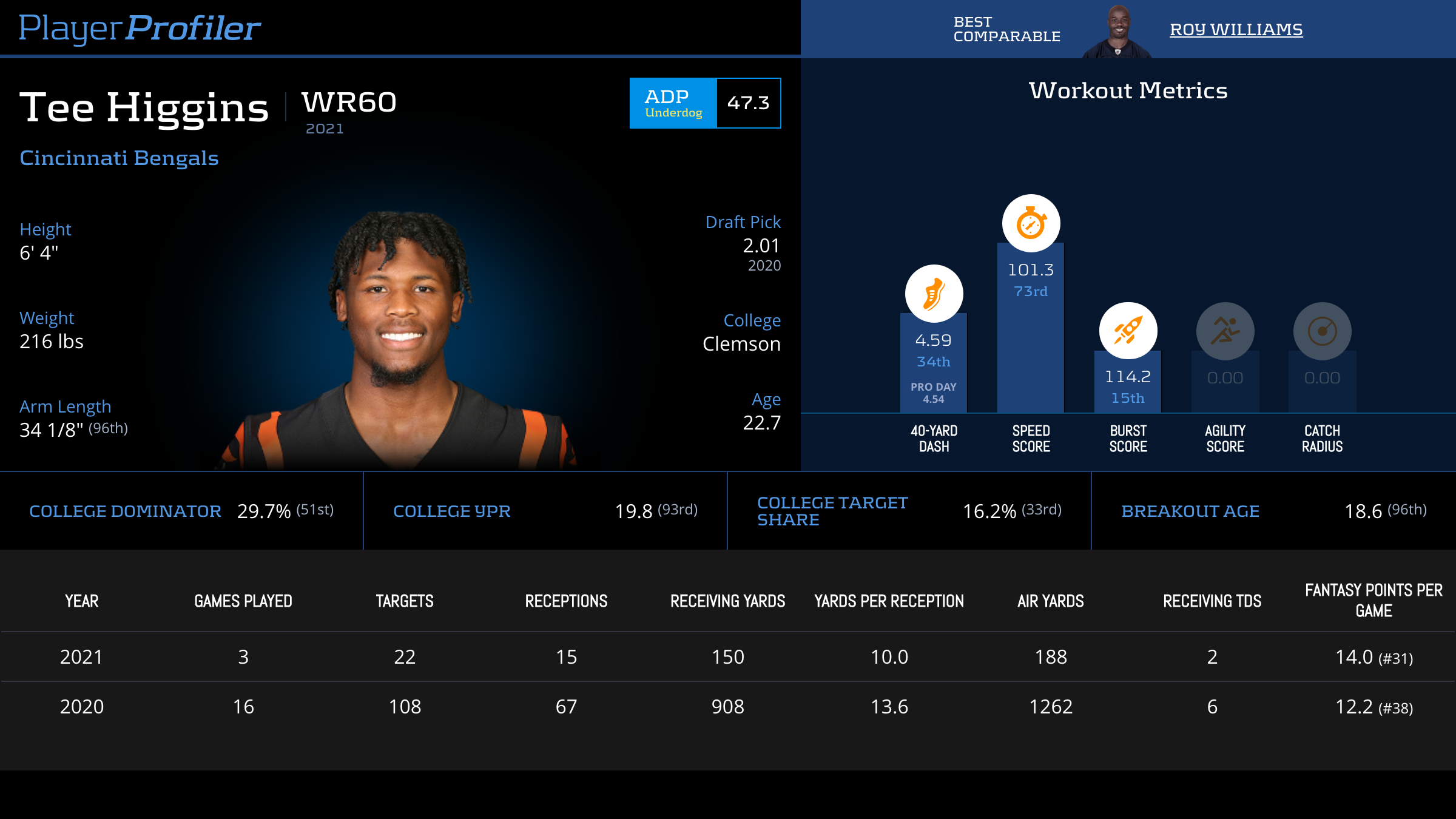 The Bengals are starting to throw more with Joe Burrow regaining confidence in his knee. This is always good news for pass catchers, especially one like Higgins who has a 95.8-percent (No. 12) Route Participation. His 23.9-percent (No. 24) Target Share is also promising. He has an alpha profile, and faces off against Detroit next week. The former Clemson Tiger is in a great position to rebound soon.

This one might come as a surprise, but DeVante Parker has earned this spot. He’s seeing a high percentage of Miami’s receiving opportunities. As the theme of this piece has been, we love players who run a high percentage of the team’s routes, and Parker is running a team high 95.3-percent (No. 13) Route Participation. He’s also earned a 38.7-percent (No. 13) Air Yards Share. Not only is he an opportunity hog in Miami, he’s also dominating the production in the receiver room. His 31.8 (No. 17) Dominator Rating is just shy of a career-high. With Will Fuller now out for the foreseeable future, there are once again more opportunities to go Parker’s way. Tua Tagovailoa is coming back, Miami already runs 37.8 (No. 3) Team Pass Plays Per Game, and his upcoming schedule is laughably easy (sans Buffalo). Put your pride aside and go grab Parker.

Get this player for cheap🔥 pic.twitter.com/yqQoREPjoA