The Tease of McKinnon

McKinnon has long been a fantasy football tease. He, in a sense, is Tony Pollard. Both McKinnon and Pollard are hyper-athletic, versatile, and explosive running backs who could never knock the opportunity barrier down and cement themselves as primary running backs. Pollard’s rushing efficiency (5.1 career yards per carry) far out laps McKinnon’s (4.1), but both have been underutilized similarly. McKinnon has never exceeded 159 carries in a season and has registered more than 50 targets in a season twice. Pollard has yet to exceed 130 carries or 50 targets in a season.

When McKinnon gets his chances, he makes the most of it. Shocking how giving a versatile, athletic specimen of a running back chances could lead to success. Dating back to McKinnon’s rookie season in 2014, he averaged 15.36 points per game in PPR formats in games where’s registered at least 15 touches. While yes, many of these performances were many seasons and a torn ACL ago, six of his 25 such games have occurred within the last two years. 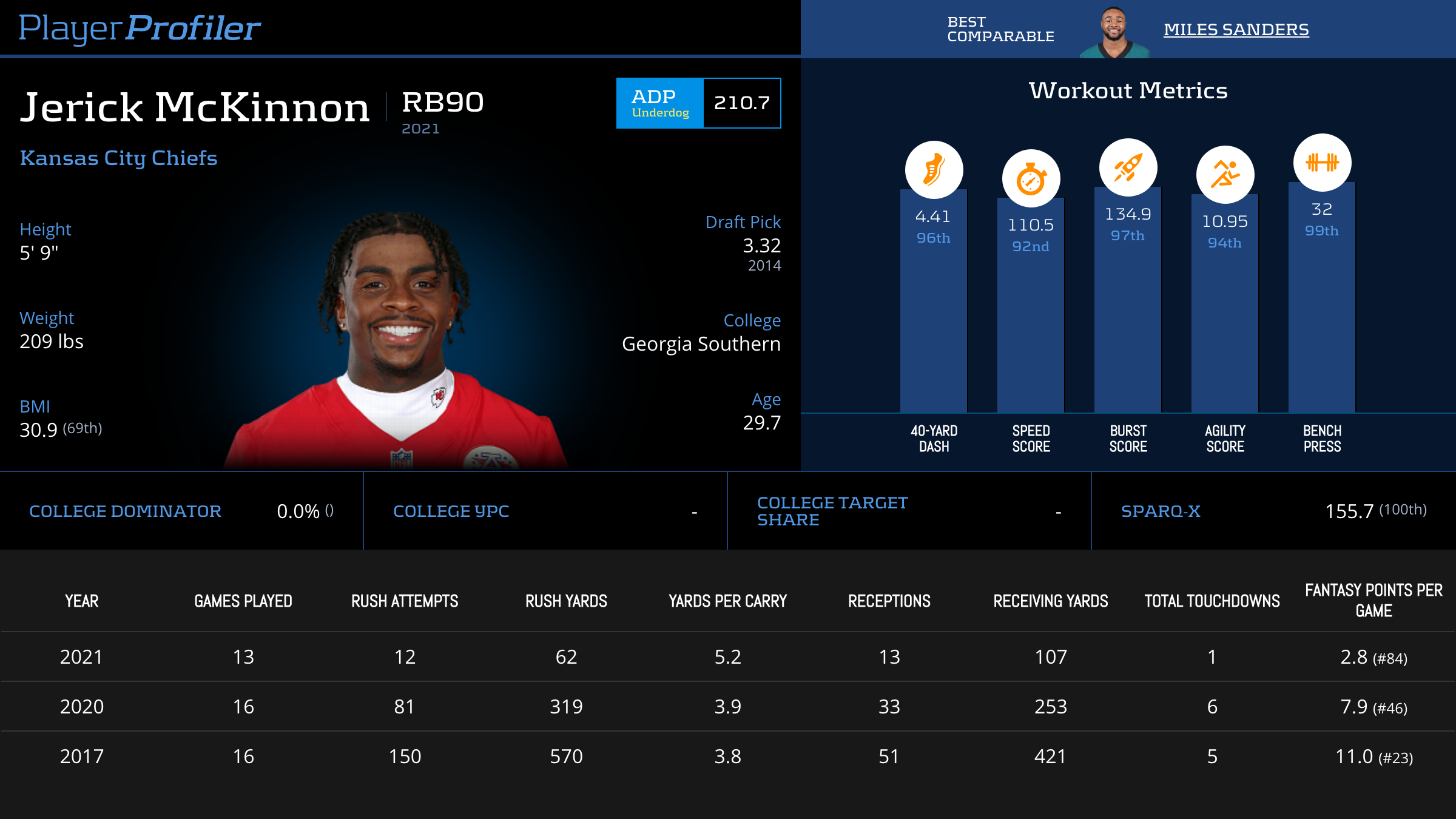 McKinnon figured to be the next running back propelled by Kyle Shanahan after signing a big contract in 2018, but a torn ACL in training camp derailed those hopes. Lingering knee issues claimed McKinnon’s 2019 season. It wasn’t until 2020 when McKinnon returned to the field. Once he returned, McKinnon has mostly been deployed as a third-down, change-of-pace depth back. He’s registered 93 carries in that span and averaged just over four yards a rush.

McKinnon excelled as a receiver out of the backfield throughout those last two years. His 7.82 yards per reception the last two seasons are on par with many of the NFL’s best running backs and exceeds his career 7.1 mark. Granted, it is a small sample spread across two different teams, but still noteworthy. After injuries sapped his best chance at being a lead back in San Francisco, the 49ers did not retain him after 2020. The Kansas City Chiefs took a dart throw on him in 2021. Similar to his last and only season in the Bay, McKinnon played sparingly, touching the ball 25 times in 13 regular-season games. It looked like the writing was on the wall.

The Playoff Trip to the Time Machine

McKinnon would not disappoint. In his first playoff start against the Pittsburgh Steelers, McKinnon rattled off 142 yards from scrimmage. The next game against the Buffalo Bills didn’t prove as fruitful, but McKinnon produced 54 yards on the ground. Kansas City’s AFC Championship Game loss saw McKinnon rush for 65 yards on 12 carries and add another 30 receiving yards. McKinnon totaled 48 touches in Kansas City’s three playoff games; Edwards-Helaire and Williams combined for 16.

This leads us to McKinnon’s spot in 2022. McKinnon may not enter the season as the starter ahead of Edwards-Helaire on the depth chart, but he showed he’s capable of producing when given the chance. Most importantly, he earned Andy Reid and Patrick Mahomes‘ trust as both a pass catcher and in pass protection.

Free-agent signee Ronald Jones II is not a notable receiving threat even when getting fed targets from the most notorious check-down artist of all time- Tom Brady. Jones does have a greater yard per reception average (7.5) than McKinnon for their careers, but Jones has one season with a yards per reception average higher than his career average. In four seasons, Jones has 104 targets: 26 on average. This is not where Jones’ bread is buttered. He could secure a role as a between-the-20s rusher for the Chiefs this year, but that isn’t what gets fantasy gamers excited.

McKinnon’s primary competition for receiving work is the incumbent in the Chiefs’ running back room: Edwards-Helaire. Edwards-Helaire also hasn’t held up in the NFL quite as he did in his final season at LSU in 2019 which precipitated the Chiefs to spend their first-round pick. He’s missed nine games in two seasons. He was solid but nothing special as a rookie, averaging 4.4 yards per carry and 8.3 yards per reception en route to an RB22 finish in PPR formats and the RB15 on a per-game basis. He was arguably Kansas City’s third-best running back in 2021.

How Does This Affect McKinnon?

This is hardly a goliath for McKinnon to overtake. Edwards-Helaire will enter training camp and the season as the primary back for the Chiefs, but he has been both injured and usurped before. McKinnon projects to be the next best receiver out of the backfield, which is an important role in Kansas City’s offense. Since Mahomes has become Kansas City’s starting quarterback in 2018, here are the number of targets he has dispersed to his backfield mates in the regular season: 97-110-111-112. 260 non-running back targets from a year ago have walked out of the door along with an additional 57 from the running back room. There are targets to be had in Kansas City and a world where McKinnon eats up a number of those even if Edwards-Helaire is healthy.

It’s hard for older running backs to become fantasy stars. But it isn’t impossible. McKinnon’s age doesn’t do him favors as he crosses into the 30-year-old threshold. His workload over his career has not been far too extensive, however. Perhaps the 755 career touches are what allowed McKinnon to still have juice in Kansas City’s playoff run as a 29-year-old. McKinnon may be best as a backup or rotation back. If Kansas City had faith in Edwards-Helaire and Jones II’s ability to carry the load this season, they wouldn’t have needed to bring McKinnon in.

He’ll likely begin the season behind those three and as a change-of-pace back. But it isn’t hard to see McKinnon carving himself a role on one of the most explosive offenses in the NFL and see that role continue to expand. Edwards-Helaire has ceded work to veterans before. Jones II has never put it all together. McKinnon has done it in this backfield and can do it again this season.