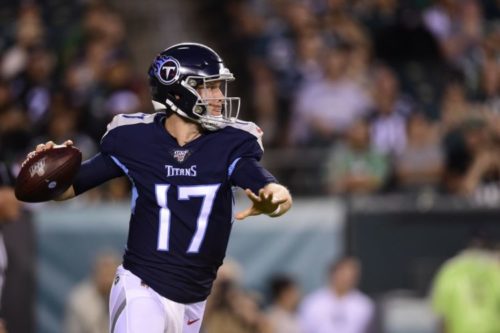 Seven weeks into the NFL season, DFS grinders now have a significant data sample to examine ahead of each week. Looking to Week 8, advanced stats and metrics point to a few distinct edges we can exploit in this slate of games. Here are a few value plays and GPP targets for the DraftKings’ Week 8 Main Slate.

Coming off a brilliant 312-yard, two-score performance, Ryan Tannehill finds himself underpriced at $5,100. On top of the strong counting stats, Tannehill recorded an 81.8-percent True Completion Percentage and a 106.1 True Passer Rating. While the sample remains small, each would rank near the top of the league.

In Rashaad Penny‘s return from injury, Chris Carson squashed all doubts by playing 89-percent of Seattle’s snaps. He carried the ball 21 times, while recording five targets. A strong performer throughout the year, Carson’s seven Breakaway Runs and 48 Evaded Tackles rank second and fourth among running backs.

Looking to Week 8, Carson faces a struggling Atlanta defense. The Falcons rank bottom-12 in most rushing metrics, but they particularly struggle against pass-catching running backs. Chase Edmonds, David Johnson and Todd Gurley have all recorded receiving touchdowns against Atlanta over the last two weeks. At $7,000, Carson’s usage in all phases warrants strong consideration in Week 8.

Taking over for an injured Kerryon Johnson last week, Ty Johnson saw ten rushing attempts and four backfield targets. More importantly, he played on 65-percent of Detroit’s snaps while J.D. McKissic only mixed in for 24-percent. A sixth-round rookie from Maryland, Johnson ran a 4.45 40-yard dash at 5-11, 210-pounds, giving him an elite 107.1 (86th-percentile among qualified running backs) Speed Score.

Facing the New York Giants, the Lions enter Week 8 favored by 6.5-points at home. The Giants allow the fourth-most yards rushing (807) and receiving (373) to opposing running backs. With Game Script, volume and matchup on his side, Johnson is a smash play at $4,900.

Coming out of Tampa Bay’s bye, Mike Evans enters Week 8 with an absurd $6,600 price tag. He’s tied with Chris Godwin at 55 targets on the season. However, Evans’ 829 Air Yards dwarf Godwin’s 637. Evans’ efficiency raises questions, but his 4.1 Target Quality Rating remains near the bottom of the league.

Looking at matchup, Evans faces the Tennessee Titans in a potential back-and-forth affair. Adoree’ Jackson failed to practice this week, putting him on track to miss Week 8. On the other side, Malcolm Butler has already allowed 33 catches for 424 yards in his coverage. With matchup and volume pointing to a solid outing, Evans presents strong value on the Week 8 slate.

Continually underrated, DraftKings set Allen Robinson‘s price absurdly low at $6,000. Robinson remains one of two receivers with at least a 40-percent air yards share and a 25-percent Target Share. He also stands out from an efficiency perspective with a 37.1-percent (No. 9) Dominator Rating in Chicago’s offense.

Facing a perceived difficult matchup in the Los Angeles Chargers, Robinson projects to draw low ownership. However, the Chargers remain a defense to target after suffering a myriad of injuries. In fact, the Chargers’ pass defense dropped all the way to 28th in DVOA this week. Already matchup-proof, Robinson remains a target magnet in Week 8.

Benefiting from a Will Fuller injury, Kenny Stills stepped up to play 92-percent of Houston’s snaps in Week 7. Stills also recorded five targets and filled in directly for Fuller. So far this season, his 136.3 Quarterback Rating when Targeted ranks fifth among qualified wide receivers.

Another player benefiting from injury, Jonnu Smith played 83-percent of Tennessee’s snaps with Delanie Walker injured. While Smith’s sample size remains small, he was an elite prospect coming out of college. A third round pick out of Florida International, Smith ran a 4.62 40-yard dash at 6-3, 248-pounds, equating to a 106.9 (83rd-percentile) Speed Score.