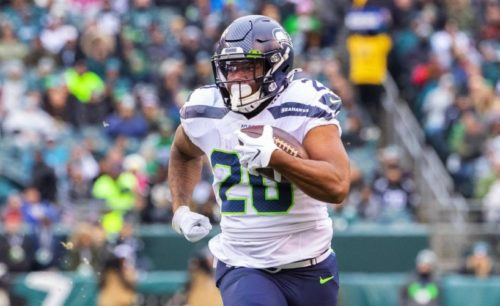 With the ever-changing NFL landscape, new trends develop each week. Using advanced stats, metrics and analytics to identify these trends can lead fantasy grinders toward the next breakout player. Week 12 presented a few player breakouts likely to influence gameplay going forward. With that said, here are three notable trends to think about as we enter Week 13.

While it took Chris Carson fumbling ten times this season, Rashaad Penny finally recorded his breakout performance. In Week 12, he carried the ball 14 times for 129 rushing yards and a score. His Snap Share also rose to a season-high 52.9-percent, while Carson’s fell to 58.8-percent. With Carson’s fumbling issues and Penny’s breakout performance, this backfield looks like a time-share moving forward.

Penny continues to perform well in the efficiency department on a limited sample. He’s already notched five (No. 19 among qualified running backs) Breakaway Runs, despite only carrying the ball 50 times this season. He also owns an impressive +20.9 (No. 13) Production Premium, which dwarfs Carson’s -10.6 mark. An impressive prospect from San Diego State, Penny’s 111.2 Speed Score ranks in the 93rd-percentile. With all the tools to become a feature back in the NFL, he continues to earn additional touches in this backfield.

Looking at efficiency metrics, Sanders appears on the cusp of a breakout performance. His 26.2-percent Juke Rate ranks 17th among qualified runners, and his 6.1 yards per touch ranks fifth. His 337 receiving yards rank ninth at the position, showing his passing game chops. When adding that to his 103.8 (76th-percentile) Speed Score, Sanders profiles as a lead back in the NFL.

While both Nick Chubb and Kareem Hunt recorded productive fantasy days for the third straight week, the Cleveland Browns moved away from two-running back sets. Chubb and Hunt each played 57-percent of Cleveland’s snaps with clearly differing roles in the offense. Chubb handled 21 rush attempts and four targets, while Hunt mixed in for eight rushes and three targets. However, with each playing a significant amount, both remain fantasy-viable options.

From an efficiency perspective, both runners excel in their particular phase of the game. Chubb leads the NFL with 13 Breakaway Runs to go along with a 28.2-percent (No. 12) Juke Rate. While still dealing with a small sample, Hunt appears productive compared to his counterparts across the league. His +25.2 Production Premium comes in sixth overall. While the timeshare remains mildly concerning from a ceiling perspective, both backs continue to find fantasy relevance on a weekly basis.