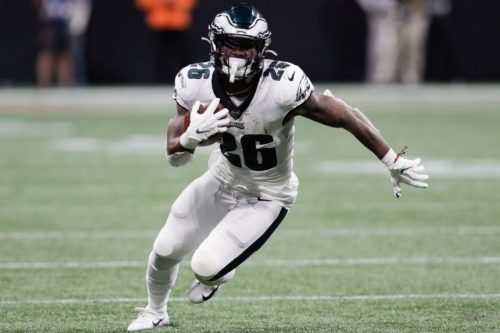 By the time this comes out, we’ll all be stuffed full of more bird than any human should be comfortable with. What better way to work those calories off than with a good sweat? Let’s see what hot takes the advanced stats and metric can dig up this week.

The Jaguars face Tampa Bay this week in a game with a 47.5-point total. That mark is tied for the second-highest on the main slate. The line has also moved and Jacksonville is now an underdog, which we want to see for the sake of their receiving options.

Since Dede Westbrook returned two weeks ago, Jacksonville has two receivers soaking up all of their Air Yards as well:

The deep shots have been concentrated to Chark and Conley, which makes both great tournament plays. Both stand at least 6-2 and were clocked at a 4.35 Forty-Yard Dash or faster, so it makes sense that both are seeing significant work down the field.

Westbrook’s 15 targets over two games aren’t bad either. He’s the third-best fantasy option but if you’re running out multiple lineups with Nick Foles, he should be in at least one.

Week 13 was the Miles Sanders Breakout All Along

Miles Sanders has been rather disappointing in his two games as the starter for Philadelphia. He has a combined 18.3 fantasy points in those games. Jordan Howard has not been cleared to practice this week so his return is unlikely.

The signal beyond Sanders’ raw totals without Howard is the volume he is seeing. His 23 carries account for 63.9-percent of the running back carries, and his nine targets include every single target thrown to a Philly back. He is their lead-rusher and their only conceivable threat to catch passes out of the backfield.

Sanders has been on the wrong side of game-script for both of his starts: The spread closed in favor of Seattle last week and was always siding with New England the week before. This week will be Sanders’ first start as a favorite and it comes against the Miami Dolphins.

Miami has allowed its opponents to rush 27.6 times for 129.8 yards per game. Both marks are the worst for any defense in the NFL.

Sanders goes for 20 DraftKings points this week, and probably more.

Writing this hurts me more than it hurts you to read, I promise: Jamaal Williams is a better play than Aaron Jones this week. By a wide margin when factoring in price.

In the past three weeks, the Packers have reverted to a full-on committee between Jones and Williams.

Williams has also improved mightily in a number of key efficiency metrics. His Catch Rate is up more than 20-percent from 2018 and his Production Premium has gone from -15.6 to +22.4, No. 11 among qualified running backs.

Jones has still been the more efficient of the two, but Williams has closed the gap in a major way. That has been enough for Matt LaFleur to spell Jones with Williams often. He’s also relying on Williams much more as a receiver out of the backfield, which he’s been very good at this season.

Finally, there’s the price. Jones costs $6,800 on DraftKings (full PPR). Williams, on the other hand, is just $4,500. The price discrepancy between the two is simply too wide given how they have been utilized in recent weeks. Williams is a great value at his cost and whoever finds their way into the end zone will almost certainly score more points. If neither do, Willams and his receptions will win the day.