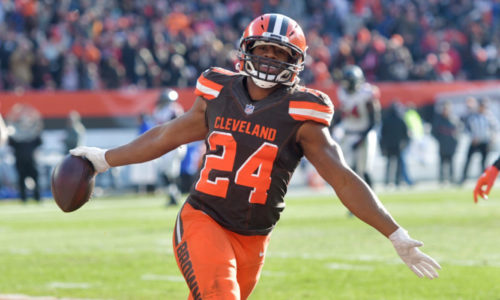 One running back that fantasy analysts seem to say the same things about is Nick Chubb of the Cleveland Browns. He lacks a prominent role in the passing game. He was No. 2 among qualified running backs with 1,494 rushing yards but only averaged 15.9 (No. 10) Fantasy Points per Game. When Kareem Hunt came back, he didn’t score as many fantasy points. Despite these sentiments, the advanced stats, metrics and analytics show that Chubb can be a league winner. He has one of the best overall athletic profiles at the running back position. He’s explosive with the ability to take it to the house on every touch, and occupies the lead role on an offense that has put an emphasis on their run game. An offense that should increase their overall efficiency and production in 2020.

Nick Chubb is one of the premier talents in the NFL, arguably the best pure runner at the position. Chubb has the feature-back size we love to see in a workhorse role at 5-11, 227-pounds. His athleticism is off the charts, with 90th percentile Speed and Burst Scores. He had 96 (No. 2) Evaded Tackles with a 28.7-percent (No. 10) Juke Rate. Not only can he run around defenses, he can make defenders miss both in the hole and the open field. He has the size to carry a large load and will be Cleveland’s first option out of the backfield. However, there’s a negative perception due to his usage in the passing game.

A reception is worth about 2.8 times the value of a carry, so the assumption is that Kareem Hunt playing that role limits Chubb’s upside. Though there is the potential that he’s used more in the passing game even with Hunt active. Last year, he nearly led the league in rushing on a team that wasn’t dominant in terms of offensive efficiency. With the upgrades on the offensive line and the overall improvement in all aspects of the offense, Chubb’s overall opportunities may increase in 2020. Even if Hunt gets more run, we may be diminishing the positive aspects of Chubb’s game and opportunity.

Another outcome that we may be overlooking is that Kareem Hunt was a feature back in the NFL and is in the final year of a team-friendly deal with the Browns. There’s the potential that Hunt is traded midseason due to his contract running out, and him walking in the offseason. Micheal Lombardi discussed that the Browns were indeed shopping Hunt, with the team putting a second round tender on him. Hunt is a player that has had a history of off the field issues. From his time in Kansas City, to even earlier this year when he was pulled over and cited for possession. This gives his situation a higher level of uncertainty.

A midseason trade is a familiar situation for Nick Chubb. During his rookie year, starter Carlos Hyde was traded to Houston. Hunt being traded during the year would leave Cleveland’s depth chart with backups such as Dontrell Hilliard, and D’Ernest Johnson. Both have interesting athletic profiles, but would ultimately play a secondary role, in which case Chubb would be unlocked as a three-down back and have a massive workload. Even if Hunt is not traded this season, most NFL teams feature at least two running backs in their systems, and both can produce a high level of fantasy points. It’s when we have three players in a backfield where we should have some areas for concern in terms of a players overall Opportunity Share. Even going back to Chubb’s time at Georgia, he has shared a backfield with other elite talents, still producing at the highest of levels.

Nick Chubb doesn’t necessarily need to be featured in the passing game in order to be a fantasy RB1. Even if he averages three targets as he did when Kareem Hunt came back from suspension, he’s a big-play threat any time the ball is in his hands. He’s one of a handful of backs that has home run ability on every touch. He’ll be the feature back in a Browns offense that has made significant upgrades on the offensive line with the addition of tackles Jack Conklin and rookie Jedrick Wills. Both of whom graded above 80 in their run blocking according to Pro Football Focus. The team also added Austin Hooper in free agency, which indicates more 12-personnel or two tight-end set usage. This will increase the overall run game effectiveness.

In fantasy, the term regression is something we hear consistently. Regression means that some type of number will regress or move back towards the overall data set’s average. Last year, Chubb had 12 (No. 3) Goal Line Carries, and 52 (No. 5) Red Zone Touches, yet only scored eight (No. 12) total touchdowns. Chubb scored zero touchdowns on his 12 goal line carries, which we can expect to change in 2020. With 17 (No. 1) Breakaway Runs and a 5.7-percent (No. 10) Breakaway Run Rate, we know he has the kind of home run ability that gives him a multiplier effect that other running backs don’t possess. Over 50-percent of his touchdowns last year came in two games, as the Browns offense seemed to disappoint throughout the entire season. His goal line and red zone work shouldn’t decrease with the RB room being the same as last year, and his potential touchdowns from those opportunities will increase.

Nick Chubb has 2019 Derrick Henry-level touchdown upside in his range of outcomes. In 2019, the Browns offense ranked No. 20 in offensive DVOA, another aspect of Chubb’s situation we can expect to be more positive with the offense projecting to be a more effective unit. With the upgrades to the offense combined with the emphasis on a run-based scheme and the potential positive regression, Chubb not only has a high floor with a secure role as the No. 1 RB on the depth chart, but the ceiling is incredibly high with his ability to break off long runs and the potential increased opportunities as the goal line back. While a reception is worth more than a carry, touchdowns and opportunity are king in fantasy. Chubb can lead you to the crown in your fantasy league in 2020.

Chubb is a top target in drafts this year, and is a player that can exceed his ADP and be a unanimous first round pick in next year’s fantasy drafts.