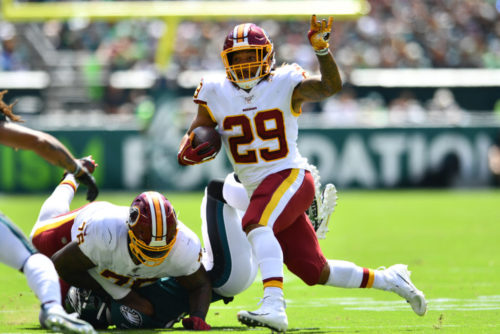 Draft strategies change from year to year. Whether it be redraft, dynasty, or best ball, we all need a plan. Fantasy football has no offseason and the idea of Zero RB/Robust WR is hot right now. Part of implementing that plan successfully is the ability to add or stash running backs off the waiver wire. While there’s nothing better than having the week’s hot waiver wire add already rostered, running backs still need to be drafted even if going the Zero RB route. PlayerProfiler’s advanced stats & metrics help highlight underappreciated mid-to-late round RB targets that have big upside in 2020.

Derrius Guice has the profile of an all-purpose RB1 stud. He showed signs at LSU where he had a 32.2-percent (73rd-percentile among qualified running backs) College Dominator Rating with 6.4 (82nd-percentile) Yards Per Carry. His Best Comparable Player is Ezekiel Elliott. He has a 110.2 (91st-percentile) Speed Score to pair with his 5-11, 224-pound frame and 31.2 (73rd-percentile) BMI. Knee injuries have prevented us from seeing his full potential in the NFL. In Week 14 though, we saw a glimpse into what a full time role would look like. He took 10 carries for 137 yards and two touchdowns.

Guice’s main competition is 35-year old Adrian Peterson and rookie third rounder Antonio Gibson. Washington also has former fourth rounder Bryce Love and newly acquired Peyton Barber. It’s expected that Gibson will have a hybrid running back/wide receiver role, which will allow him to have standalone fantasy value. Though Gibson has a 122.8 (99th-percentile) Speed Score to pair with a 30.9 (68th-percentile) BMI, he wont take significant work away from Guice this season. Given a full time opportunity, Guice will be a fantasy RB1.

Fantasy darling Duke Johnson has been loved by the community for years. Unfortunately, his career has been limited by crowded backfields. This year is no different. The Texans added David Johnson this offseason and he will be the workhorse. The Texans will need to justify the move and his salary by feeding him the rock.

The Steelers offense was a disaster in 2019 after Ben Roethlisberger went down with an elbow injury. The 38-year-old Roethlisberger returns in for his 17th season in 2020. A healthy Big Ben will help the entire offense put up better numbers. James Conner is the starter at running back. Conner missed six games last year and never returned to his pre-injury form. While he was out, the team went with a combination of Benny Snell, Jaylen Samuels, and Kerrith Whyte. They weren’t productive.

Conner is heading into a contract year and has the highest fraglity rating on PlayerProfiler. Enter Anthony McFarland. The Steelers took McFarland in the fourth round of the 2020 NFL Draft. He comes in with a 107.0 (85th-percentile) Speed Score combined with a 30.1 (80th-percentile) BMI. He adds size and speed to a running back room that seriously lacks it. If Conner goes down or isn’t productive, its feasible for the offense to turn to McFarland.

Chase Edmonds is an ideal late-round target. He showed us last season that he can handle a full workload when called upon. In Week 7, he turned 29 touches into 150 yards and three touchdown. What’s intriguing about Edmonds is his 10.98 (97th-percentile) Agility Score, which is reflective of his short area quickness. When given a chance, he averaged 4.8 (No. 6) True Yards Per Carry and 2.00 (No. 8) Yards Created Per Touch.

The Cardinals traded for Kenyan Drake midseason and he produced right away. Drake is the starter heading ito 2020, but he has never averaged a full workload. There is ample opportunity in this offense. The addition of DeAndre Hopkins and the running threat of Kyler Murray will keep defenses honest. The Cardinals had last season’s second-highest pace of play, running 2.39 plays per minute on average. They will be up near the top of the league again this season. There is zero depth in this RB core behind Drake. Edmonds will be the primary backup with seventh-round rookie Eno Benjamin and a guy named D.J. Foster battling for the No. 3 role. Edmonds will be that hot waiver add when given the role.